Dams and reservoirs disrupt the natural transport of sediment in streams by creating large backwater areas with low velocities, allowing the sediment to settle to the bottom of the reservoir. Over time, the volume and surface area of the reservoir are reduced as sediment accumulates, which can have a detrimental effect on authorized purposes, such as flood control and recreation. Predicting sediment deposition can be accomplished by estimating the incoming sediment load and the trapping efficiency of the reservoir, along with other parameters. Stream gauges upstream of reservoirs are an excellent source for estimating the inflow of water and sediment into the reservoir. Typically, suspended sediment concentration measurements are collected at gauges periodically throughout the year at various measured flow rates. The concentration and flow measurements can be used to construct a sediment load versus flow rating curve, which is then used to calculate a daily sediment load using the estimated daily flow. The sediment size gradation is often also estimated from the suspended sediment sample. The trapping efficiency of a reservoir can be estimated using methods such as the Brune Curve Method. An estimate of the bulk density of the sediment is needed to convert the computed weight of sediment deposited into a volume. The bulk density can be estimated by either directly measuring the density of the reservoir sediment deposits, or by calculating it from the measured inflow gradation and typical values for each grain class.

In this workshop, you will become familiar with several reservoir sedimentation methods that are available within HEC-HMS. The tutorial will cover case studies at Kanopolis and Tuttle Creek reservoirs using two different methods for specifying reservoir releases. Input data is provided in the attached files and was estimated from USGS stream gauges and field measurement taken at the two reservoirs.

This tutorial estimates sedimentation in USACE reservoirs Tuttle creek and Kanopolis located on the Big Blue River and Smoky Hills River respectively (see the figure below). The Big Blue River has a drainage area of 9,556 square miles upstream of Tuttle Creek, while the Smokey Hill River has a drainage area of 7,860 square miles upstream of Kanopolis. Predominant land use in both watersheds is agriculture, consisting of cropland and grazing. Construction of Tuttle Creek dam was completed in July 1959 and Kanopolis dam was completed in March 1948. Significant amounts of sediment have been deposited in both reservoirs since dam construction, as observed from surveys of the lakes. The sediment deposition has significantly reduced the volume and surface area of both lakes and has interfered with operation of the flow control gates at Kanopolis. 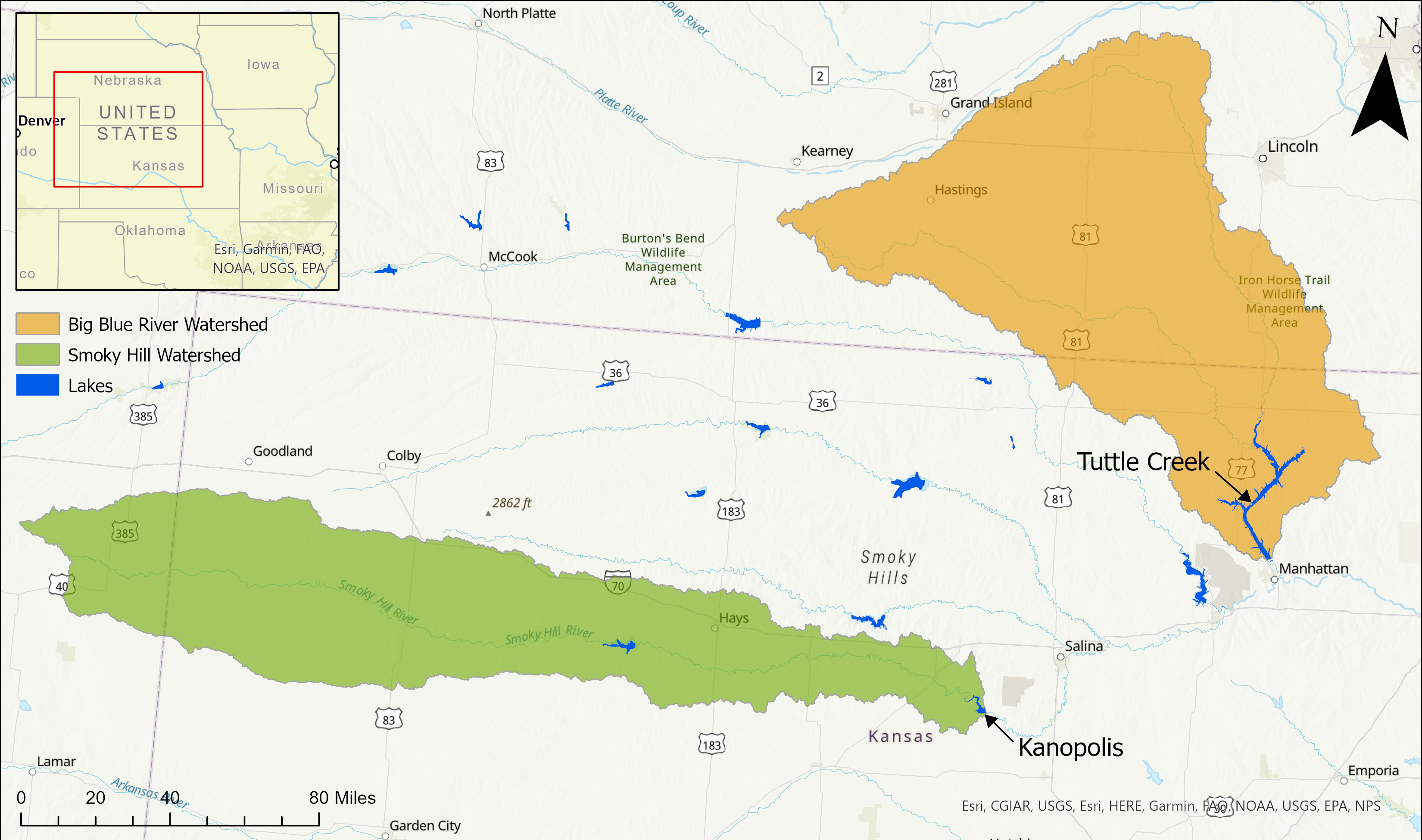