This tutorial will step through how to import and apply a gridded curve number dataset in HEC-HMS.  The Curve Number (CN) method is a widely used procedure for estimating precipitation excess/loss that takes into effect land use and soil types.  The CN procedures were empirically derived from studies of small agricultural watersheds.  Most applications of the CN method lumps the CN value as an average of the subbasin or watershed.  HEC-HMS allows the modeler to either apply a subbasin average CN value or use a gridded approach where different CN values can be applied on a grid cell basis. Each each grid cell within a subbasin receives its own precipitation and losses/excess are computed based on the grid cell's CN value. To utilize the gridded curve number method in HEC-HMS, the modeler is required to convert their gridded curve number raster into a gridded DSS record.  In the past, the asc2DSS.exe tool was used to convert ascii format grids to gridded DSS records. Recent development in HEC tools allow the HEC-HMS modeler to convert gridded CN rasters from common GIS formats to the DSS format using HEC-Vortex.

This tutorial was tested using HEC-HMS beta 4.10 and requires the users to have access to this version of the software.  We will use the Pilot Creek watershed (watershed located approximately 12 mile south of Knoxville, TN) for this tutorial. The tutorial assumes you have already created your gridded curve number raster in a GIS.  This tutorial does not describe how to delineate a watershed or how to set up a gridded precipitation simulation.  You must also know how to create an empty DSS file.  The project and associated files can be downloaded here: PistolCreek_Tutorial.7z

Make sure to review your gridded curve number raster file and that it overlaps your delineated watershed.  You can find the CN raster file and watershed shapefile in the gis folder in the project directory (\PistolCreek_Tutorial\gis\).  You will get an error in HEC-HMS at the start of the simulation if the CN grid does not overlap the subbasin boundary.  A good practice is to create a buffer of your watershed shapefile and clip the CN grid to the buffered watershed.  You can use your choice of GIS software, such as QGIS or ArcMap/Pro.  The figure below confirms the CN grid overlaps the watershed area. 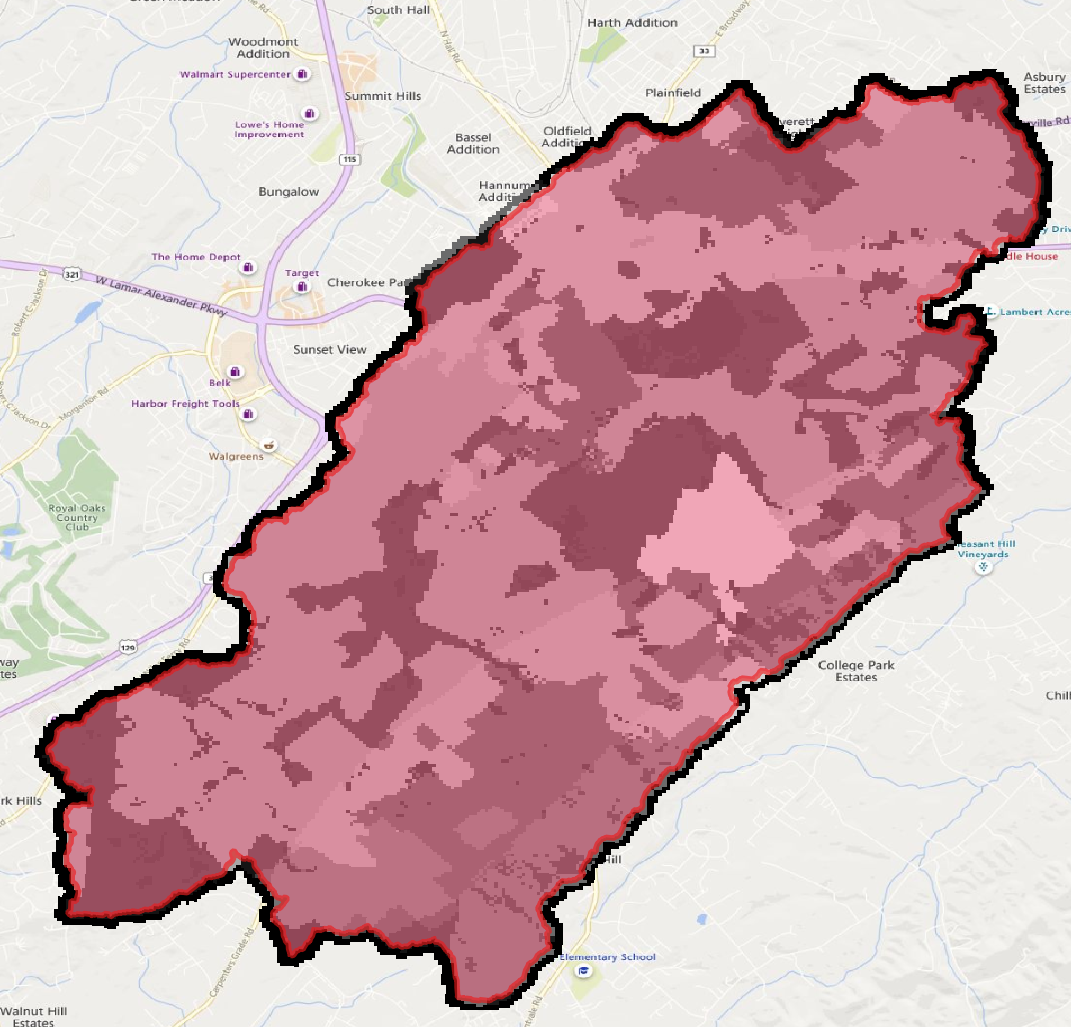 If you do not have a watershed shapefile, you can easily export one in HEC-HMS by selecting on the GIS menu → Export Layers

The next step is to import the CN raster file to DSS.

Click next and the CN grid import should finish very quickly.  Open your CNgrid.dss file and plot the CN grid to ensure the import process completed.  You should see something like the image shown below in the Grid Display tab. 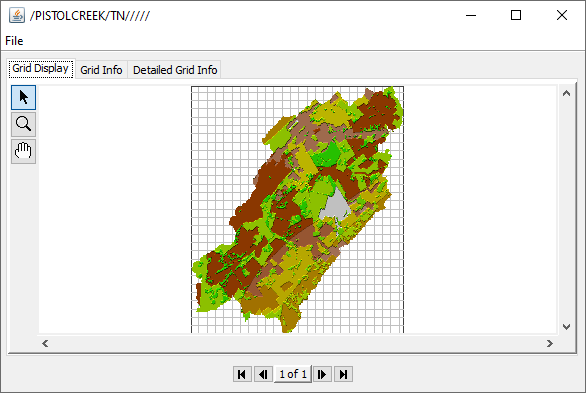 In the Grid Info tab, check that the values match the figure below paying close attention to the Grid Type, Data Units, Data Type, and cell size. 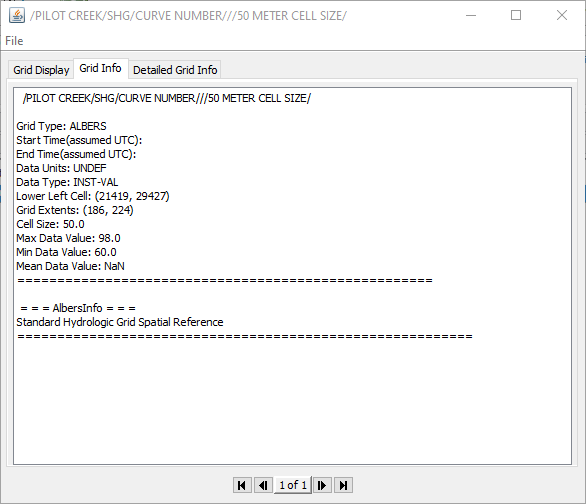 Once those are confirmed, you will need to rename the Part C of the DSS record to CURVE NUMBER.  This lets HEC-HMS know this grid is a curve number grid.  Once these are checked, you are ready to import the grid into HEC-HMS.

Open the PistolCreek_Tutorial project in HEC-HMS 4.10.  You should see a mostly complete project with a basin model, gridded precipitation meteorological model, control specification already set up. 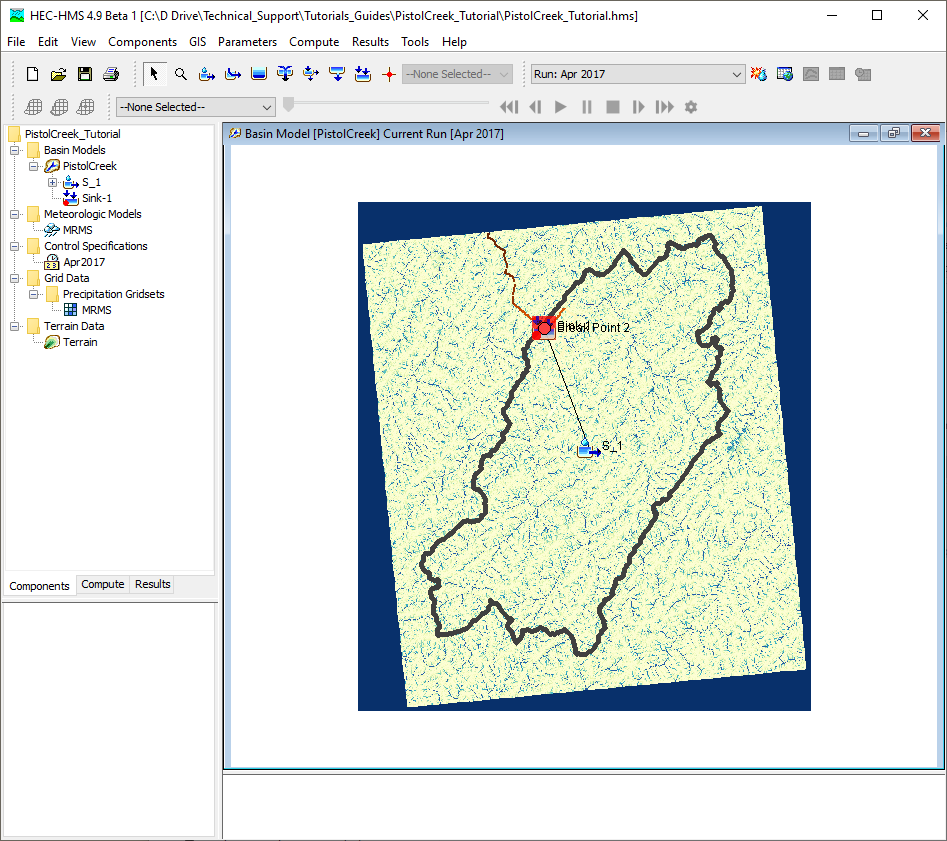 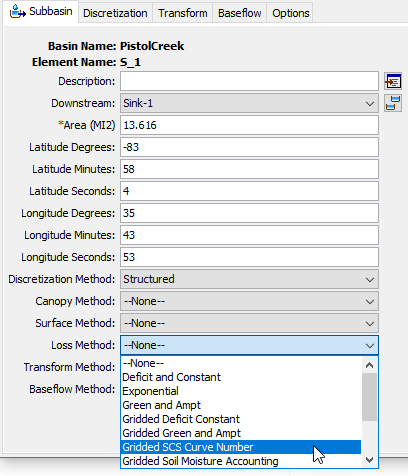 In the Discretization tab, make sure the Projection and cell size is set to SHG and 50 meters.  These values should be familiar to you since we set them during the CN grid import process.  In the GIS menu, select Compute | Grid Cells to create your Discretization grid layer.  You can view the created layer in the View | Map Layers editor. Make sure you check "Discretization". 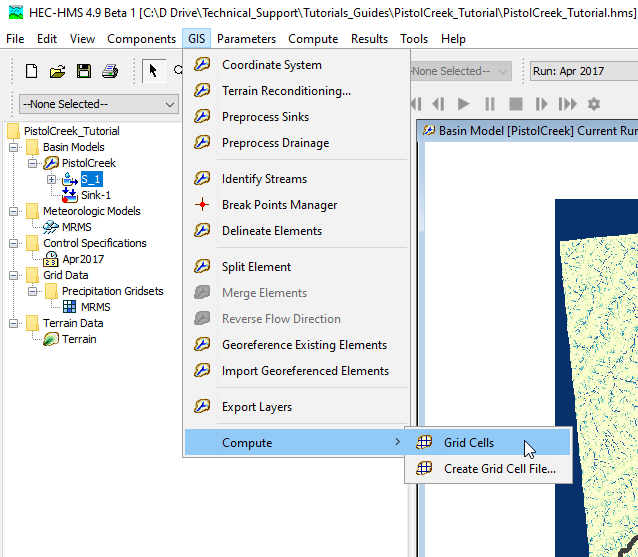 Once you have your Discretization computed, add your newly created DSS CN grid file into the HEC-HMS project.  This can be done by selecting Components | Grid Data Manager. 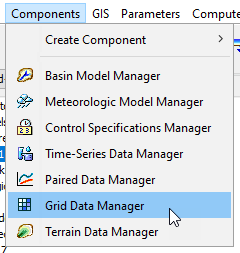 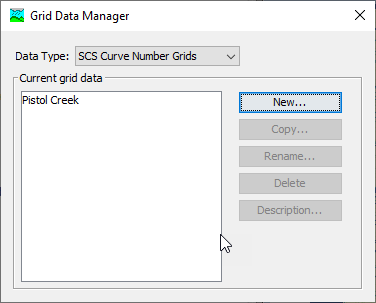 Once you click OK, the SCS Curve Number Grids folder will appear under the Grid Data folder.  Expand the SCS Curve Number Grids and select Pistol Creek.  In the Component Editor, navigate to the location of your DSS file in the data folder (or wherever you saved your DSS file with the CN grid).  In the DSS Pathname, select your CN grid record and save the project.  In the Component Editor of your subbasin element, select the CN grid in the loss tab. 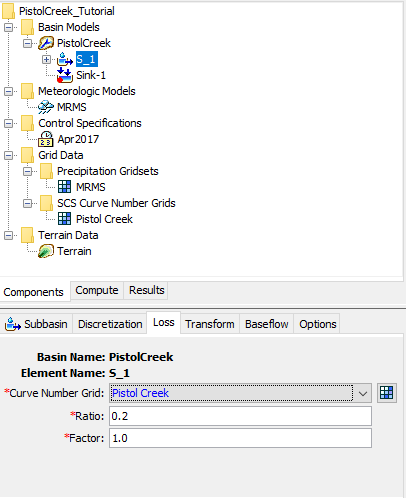 Check that the CN grids were set up correctly by running a simulation.  Head over to the compute tab and run the Apr 2017 simulation.  The simulation should run to completion. 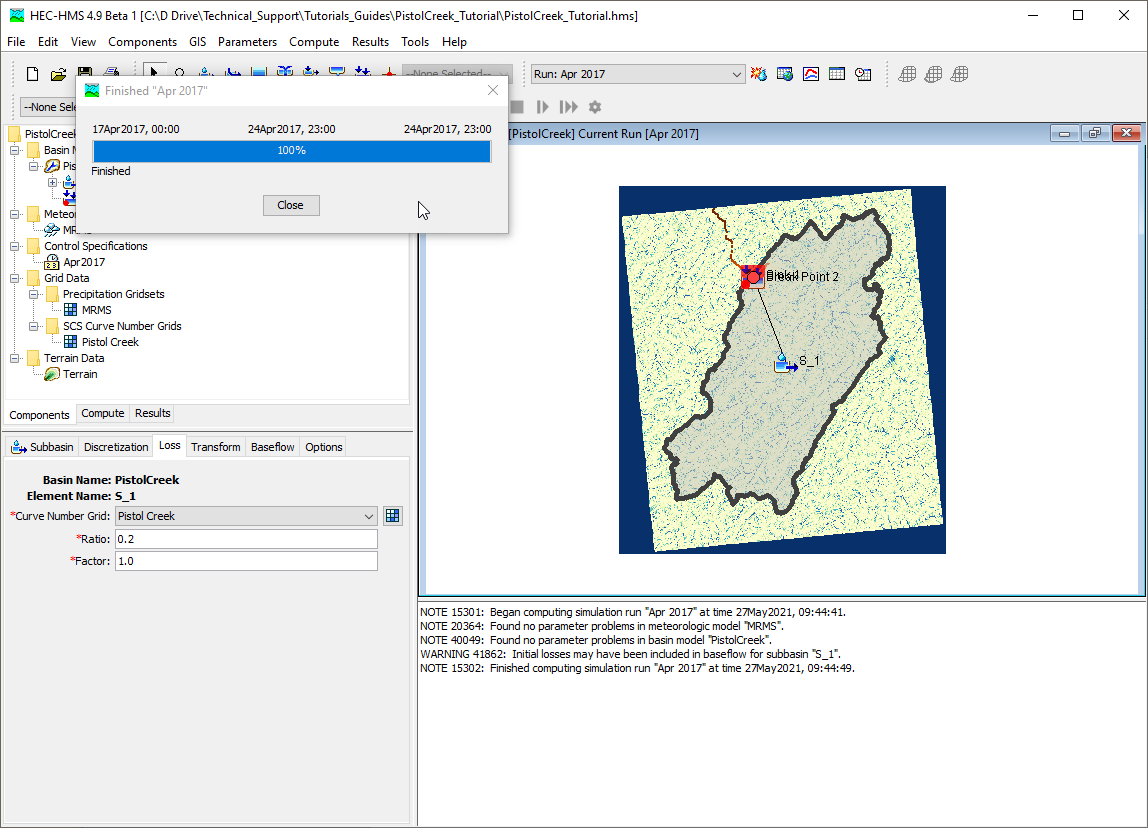 Although the gridded precipitation method is selected, non-gridded meteorological methods can also be used with the gridded SCS Curve Number method.

For comparison purposes, we are going to set up another basin model that uses the subbasin average Curve Number instead of the Curve Number grid.