As implied by its name, the Linear Reservoir baseflow method uses one to three linear reservoirs (layers) to simulate the recession of baseflow after a storm event.  Unlike the other baseflow methods, this method is guaranteed to conserve mass (i.e. precipitation losses = baseflow volume).  The volume of infiltrated water is used as inflow to the Linear Reservoir method.  Inflow can be partitioned to each layer in addition to deep aquifer recharge.  As such, during periods of high infiltration, more baseflow will be generated.  Conversely, during periods of little to no infiltration, less baseflow will be generated.  When three groundwater reservoirs are used within this method, the system can be conceptualized as shown in the following figure. 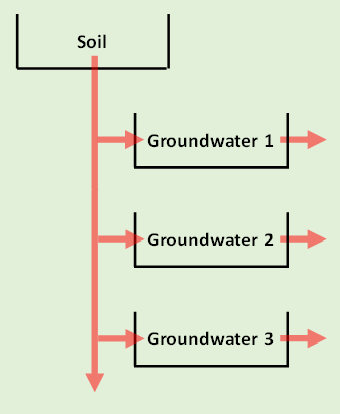 Question 1. When using the Deficit and Constant loss method in combination with the Linear Reservoir baseflow method, which time series from the loss method are available for baseflow?

Question 2. What advantages are realized by relating the Linear Reservoir groundwater coefficients to the Clark unit hydrograph parameters?

Another reason to relate the two processes is to reduce the complexity of parameterizing a basin model with many subbasins.  Using ratios (i.e. 3 * R or 10* R) is a quick way to parameterize a model while linking parameters that are conceptually similar.

Similar processes that impact storage, attenuation, and timing of surface water also impact the response of interflow and baseflow.  Interflow and baseflow happen throughout the watershed.  Infiltrated water moves through the soil and then exfiltrates into a small channel.  Once in the channel network, water flows in the stream network to the subbasin outlet.  The path water takes after it exfiltrates into a channel is similar to the path direct runoff takes.  The difference is that groundwater flow / baseflow spends a portion of the travel time in the soil, which is accounted for by increasing the baseflow coefficient or adding multiple linear reservoirs (steps).

However, it is not absolutely necessary to link the Linear Reservoir baseflow coefficients to the Clark unit hydrograph parameters.  Other considerations (e.g. geological formations that significantly differ from surface features, etc) may also impact baseflow and should be considered when parameterizing the baseflow method.

Question 3. How do changes in the GW 1 and GW 2 Coefficients impact the baseflow hydrograph?

Modify GW 2 to match the receding limb of the observed hydrograph.

Question 4. How do changes in the number of GW 1 and GW 2 Reservoirs impact the baseflow hydrograph?

Similar to increasing the GW 1 and GW 2 Coefficients, the number of reservoirs can be used to better match the receding limb of the observed hydrograph.

The GW 1 and GW 2 Fractions are used to shift infiltrated water between groundwater layers.

In general, evenly dividing infiltrated water between the Linear Reservoir layers is a good place to start when calibrating the model.

The GW 1 and 2 Fractions can be used to remove water to a deep, non-contributing aquifer.  The GW Fractions DO NOT have to sum to a value of 1.  If the Fractions do not sum to 1, then the difference (i.e. 1 - sum of the GW Fractions) is lost to a deep aquifer and will not contribute to runoff from the subbasin.  When each fraction is set to 0.1, 80% of the water that is infiltrated due to the constant rate is lost to deep storage.