As total runoff from subbasins reach defined channels, depths increase and the predominant flow regime begins to transition to open channel flow.  At this point, open channel flow approximations are used to represent translation and attenuation effects as flood waves move downgradient.  Each of the channel routing methods within HEC-HMS implements a hydrologic routing methodology as compared to a hydraulic approach that implements the unsteady flow equations.  Each method included in the program provides a different level of detail and not all methods are equally adept at representing a particular stream.

The momentum equation accounts for forces that act on a body of water in an open channel.  In simple terms, it equates the sum of gravitational forces, pressure forces, and friction forces to the product of fluid mass and acceleration.  The continuity equation accounts for the volume of water in a reach of an open channel, including the volume flowing into the reach, the volume flowing out of the reach, and the volume stored in the reach.  When combined, these two equations are known as the St. Venant or Dynamic Wave equations.

Although the solution of the full equations is appropriate for all (and required for many) one-dimensional channel flow problems, approximations are adequate for most hydrologic simulations.  Specifically, simplifications of the momentum equation are often made that only include relevant and significant terms.

In this workshop, you will become familiar with several channel routing methods that are available within HEC-HMS.  Specifically, you will:

In this workshop, the study area is designated as a portion of the Middle Fork American River between Interbay Dam and French Meadows Reservoir, as shown in the following figure. 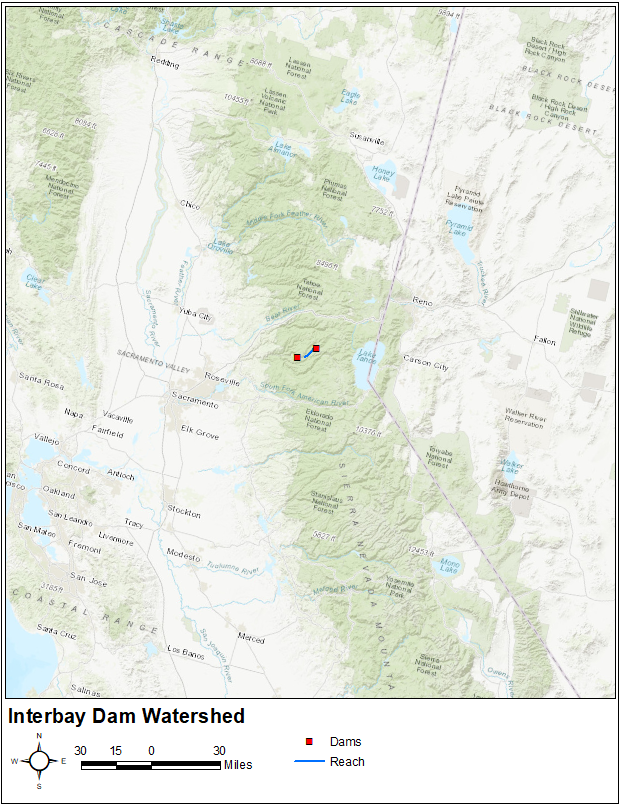 Elevations along the reach of interest range from approximately 3350 ft to 5100 ft as referenced to the North American Vertical Datum of 1988 (NAVD88), as shown in the following figure. 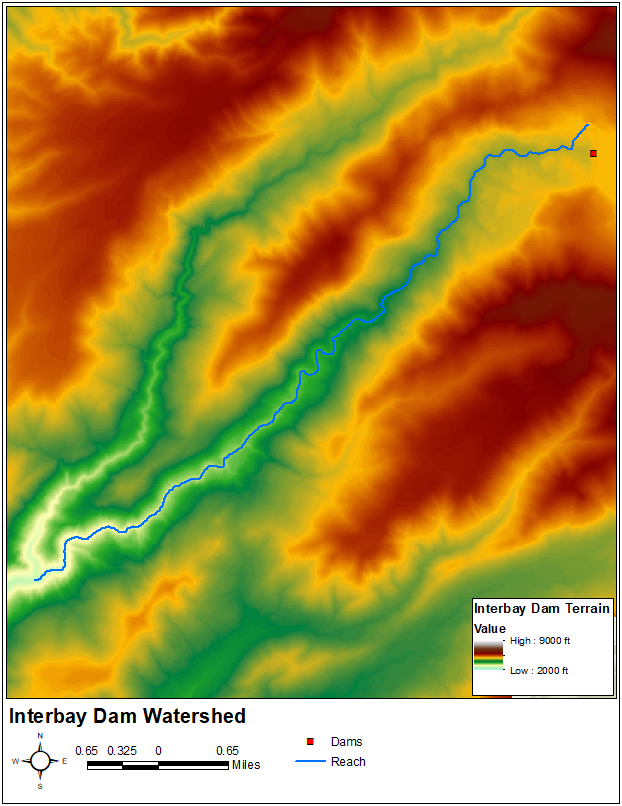 A 24-hour time period will be simulated within this workshop.

No precipitation will be simulated within this workshop.

An HEC-HMS project named "Muskingum_Cunge_Workshop" has already been created for you.  This HEC-HMS project contains a basin model named "Trapezoidal", a meteorologic model named "noRain", and a control specification named "hypothetical".  As shown within the following figure, there is a single source element named "Inflow" that is connected to a routing reach element named "MF_American_Rv_R20" that is connected to a junction element named "Outflow".  These elements were originally delineated using terrain data downloaded from the USGS National Map Viewer. 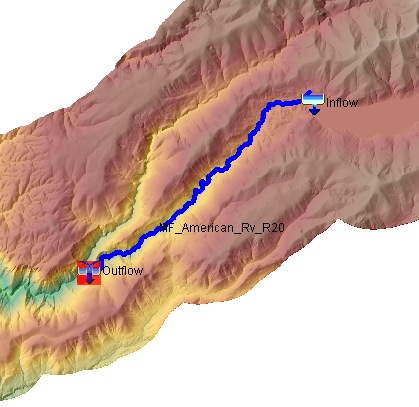 The "Inflow" source element was set to use the previously-described upstream boundary condition (i.e. "known" inflow hydrograph).  The previously-mentioned HEC-RAS outflow hydrograph (i.e. "observed") was linked to both the MF_American_Rv_R20 routing reach and Outflow junction elements as observed data.