Rain-on-snow events are a common occurrence on mountain slopes within the snow transition zone in the mountainous West. This is especially true for the rivers in the Sierra Nevada Mountains which typically experience their highest flow rates when warm winter storms interact with extensive snow cover (Kattelmann, 1997). The effects of rainfall on snowmelt can significantly increase flooding and associated damages. The U.S. Army Corps of Engineers (USACE) found that the major source of energy for snowmelt during rainfall is the convective transfer of sensible and latent heats from the atmosphere to the snow (USACE, 1956).

HEC-HMS is currently being modified to include three methods for accumulating and melting snow.  These three methods range from being relatively simple with only a few required boundary conditions to intricate with numerous required meteorological inputs.  All three methods include means to discriminate between precipitation falling as rain or snow, form a snowpack, melt the snowpack, reformulate the snowpack when temperatures drop below a defined threshold, and eventually melt the entire snowpack.  Also, users have the ability to employ these methods at either a subbasin scale (i.e. lumped/banded) or within gridded (i.e. distributed) implementations.

The simplest snowmelt/accumulation modeling approach within HEC-HMS, which has been available for several years, is the Temperature Index method.  This method is based upon SNOW-17 (Anderson, 2006).  Within this method, air temperature is used as a proxy for the energy available for heating or melting the snowpack.  While this method is relatively simple, it is incredibly flexible, easily adjusted through model calibration, and has seen wide use throughout the U.S. to design and operate water supply and flood risk management infrastructure (USACE, 1998).  Time series of precipitation, liquid water at the soil surface (LWASS), snow water equivalent (SWE), and temperature that is either used or generated by the Temperature Index method within HEC-HMS are shown in Figure 1. 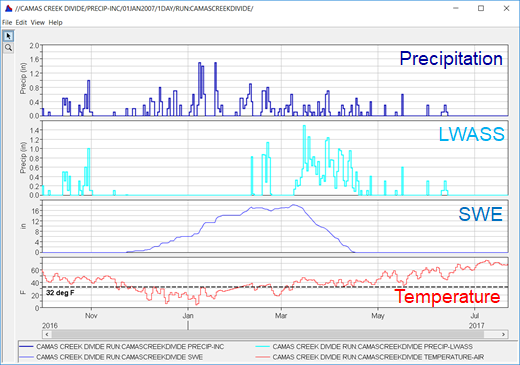 Within version 4.4, the Temperature Index method was enhanced to allow for subbasin-level parameterization in addition to new wet and dry meltrate methods.

The most complicated snowmelt/accumulation modeling approach being integrated within HEC-HMS utilizes a complete energy balance to simulate the growth, evolution, and melt of a snowpack.  This method is based upon the Utah Energy Balance Snow Accumulation and Melt Model (Tarboton and Luce, 1997).  This method has the ability to potentially outperform the two previously described methods when air temperature and/or net radiation are not the primary sources of energy available for snowmelt (USACE, 1998).  For instance, both the Temperature Index and RTI methods do not implicitly include means for incorporating energy from turbulent heat transfer.  However, the Energy Balance method suffers from the need for a large amount of highly accurate meteorologic inputs that are not readily available in most watersheds. 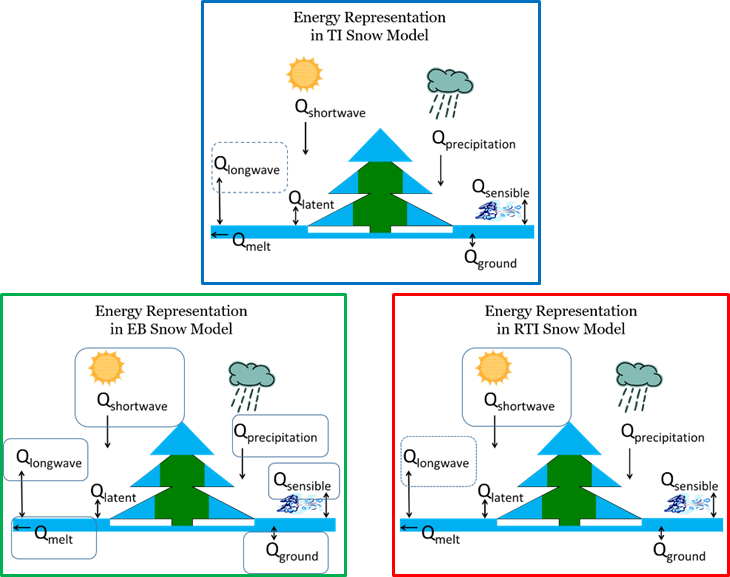 Given the significance of rain-on-snow floods and the forthcoming snowmelt methods within HEC-HMS, a comprehensive evaluation of the current state-of-the-practice methods and techniques for simulating rain-on-snow processes was proposed.  This evaluation is attempting to answer the following questions:

Additionally, this evaluation aims to provide guidance to users regarding where to find and how to effectively use data within snowmelt applications.  Finally, the amount of effort required for data preparation as well as computational time will be tracked and reported for each method.

The Truckee River watershed was selected to demonstrate the benefits, drawbacks, and consequences of the aforementioned snowmelt methods.  The Truckee River originates at Lake Tahoe in California and flows approximately 105 miles north and east into Nevada.  Major population centers within the Truckee River watershed include the cities of Truckee, CA, Reno, NV, and Sparks, NV with a total population greater than 350,000 (as counted during the 2010 census).  While the Truckee River provides a major source of water for its nearby inhabitants, the river is also prone to significant flooding.  Substantial damage has occurred during large scale and widespread rain-on-snow flood events in 1950, 1955, 1996-1997, 2005-2006, and 2016-2017, as shown in Figure 3. 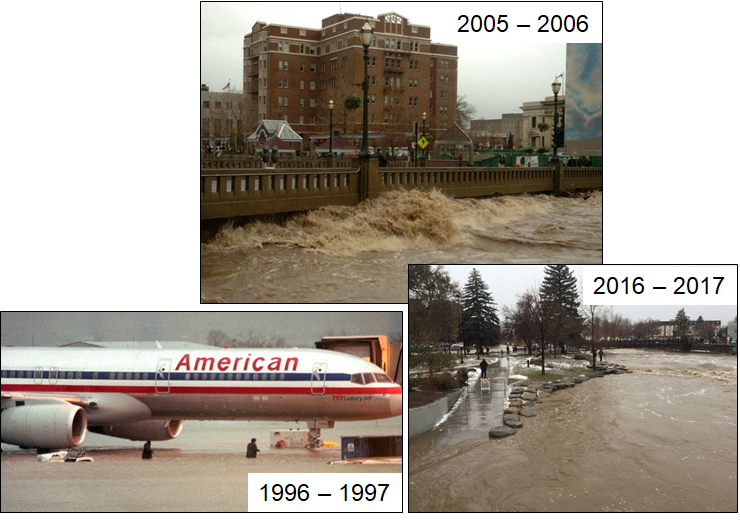 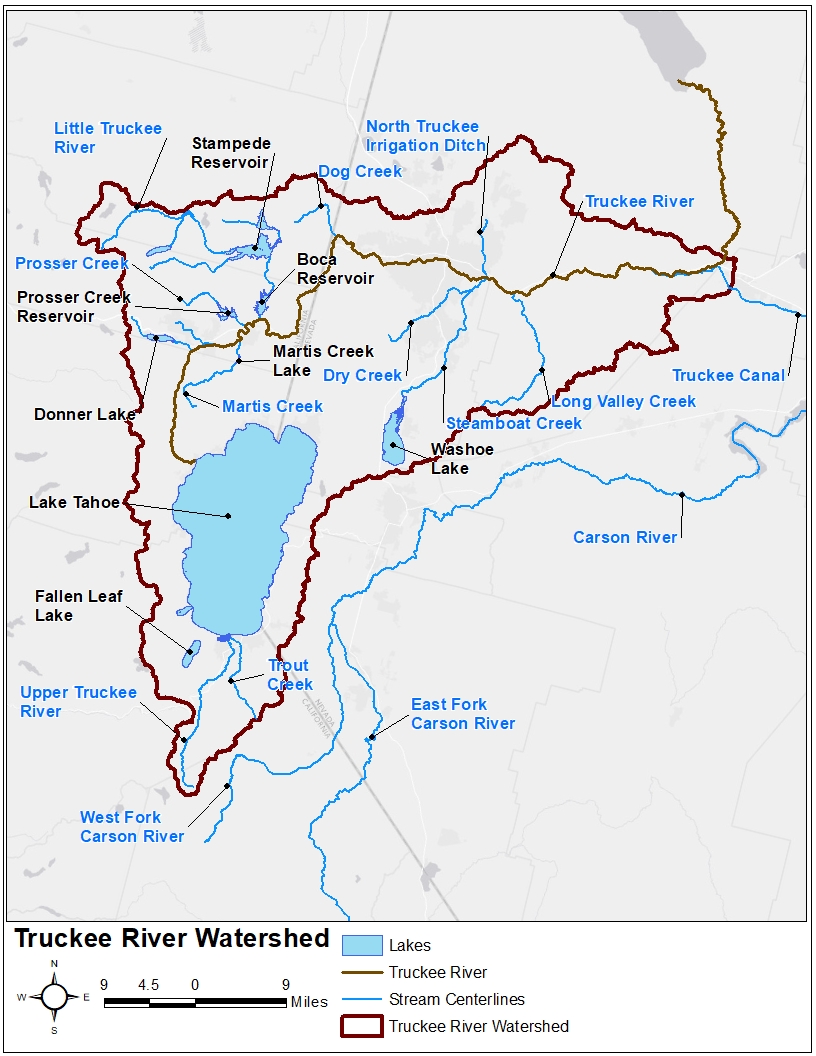 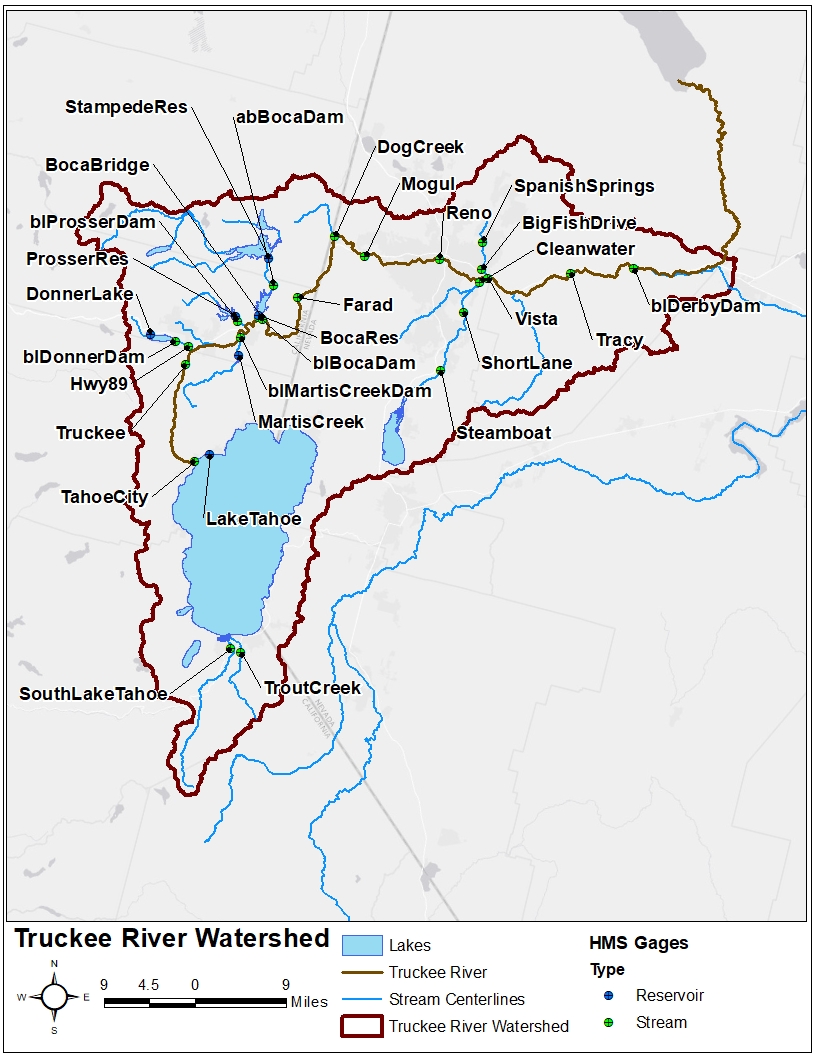 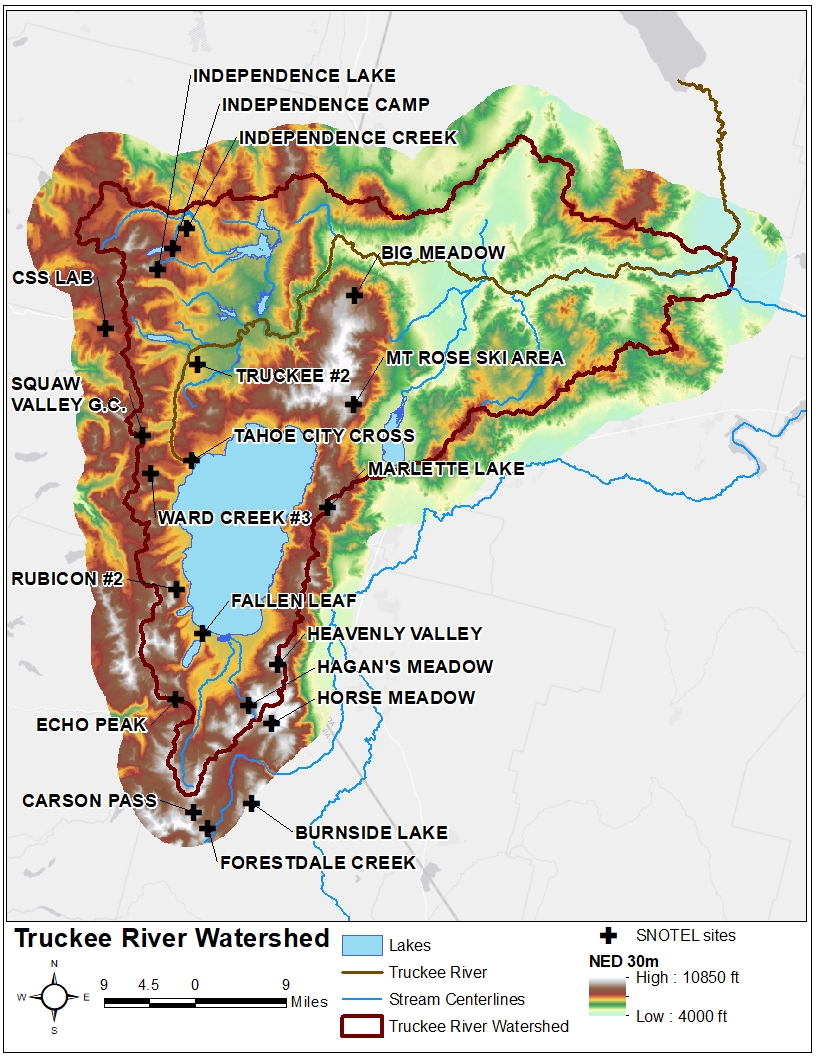 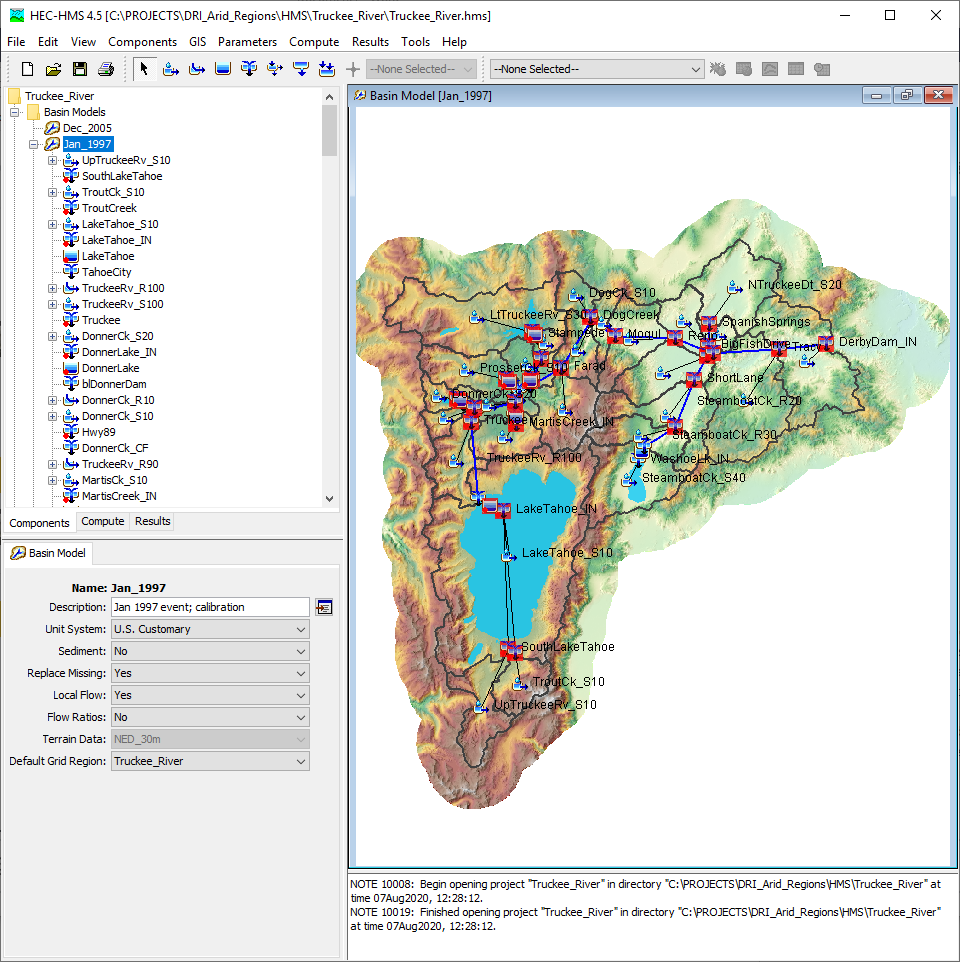 In order to derive appropriate Temperature Index parameters, the accumulation and melt of snow over 10 years was simulated at the 20+ SNOTEL stations within or surrounding the Truckee River watershed.  SWE computed by HEC-HMS at each SNOTEL station was compared against observed data, as shown in Figure 8.  Temperature Index parameters were varied in order to achieve adequate calibration using several statistical metrics. 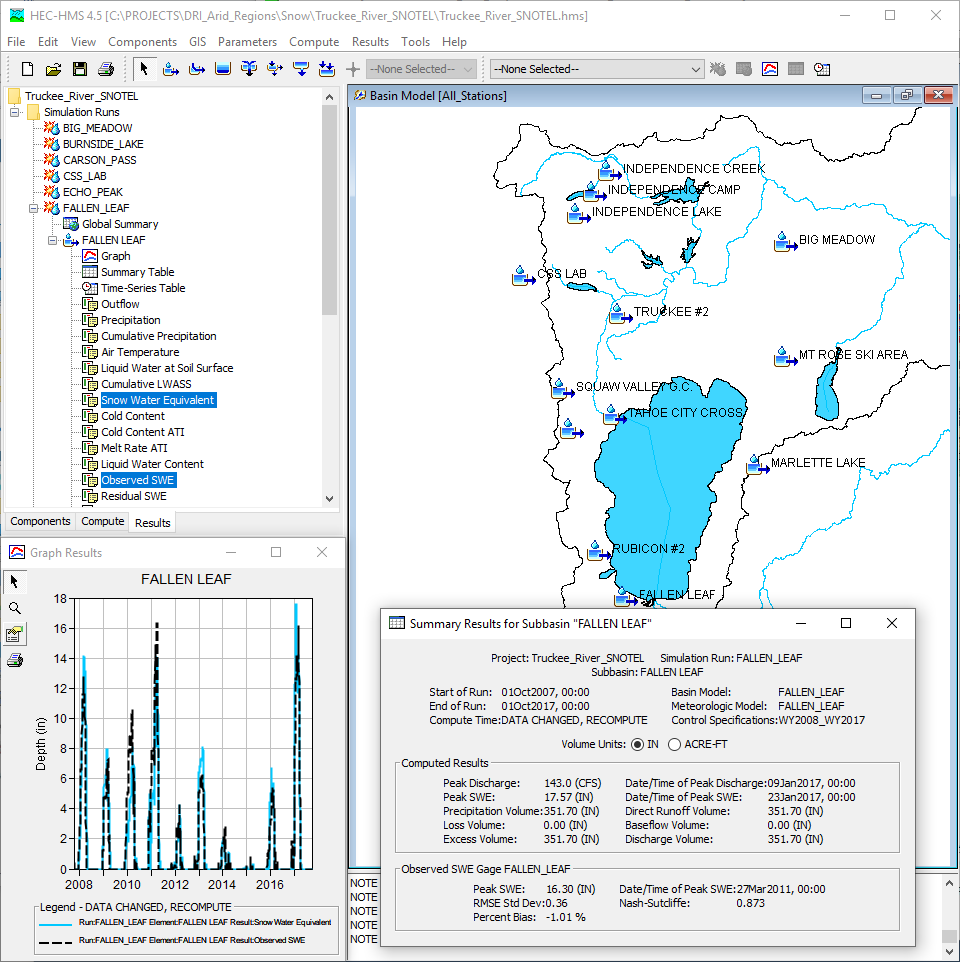 The calibrated Temperature Index parameters achieved during this process were found to vary throughout the modeling domain.  For instance, the calibrated PX and Base temperatures varied by approximately 5 degrees, as shown in Figure 9. 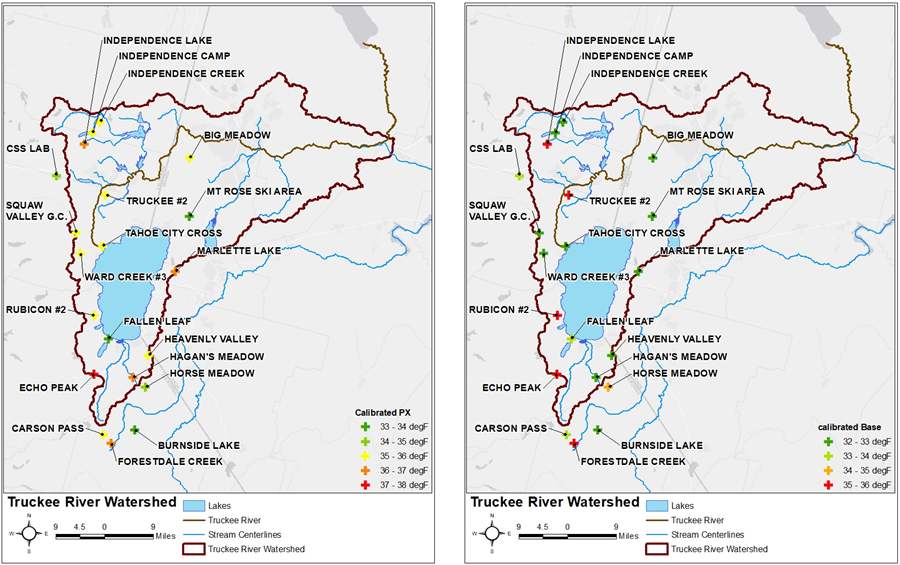 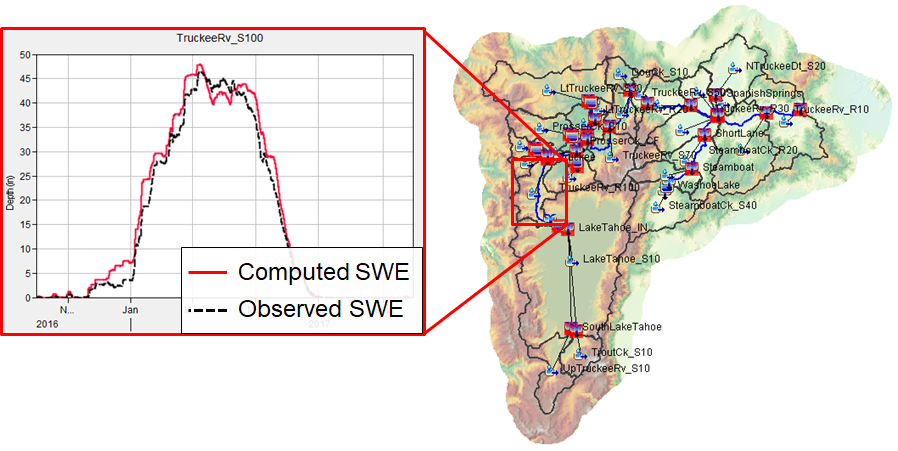 Similar to the point calibration effort, the distributed Temperature Index parameters achieved during this process were found to vary throughout the modeling domain.  For instance, the calibrated PX and Base temperatures varied by approximately 7 degrees, as shown in Figure 11. 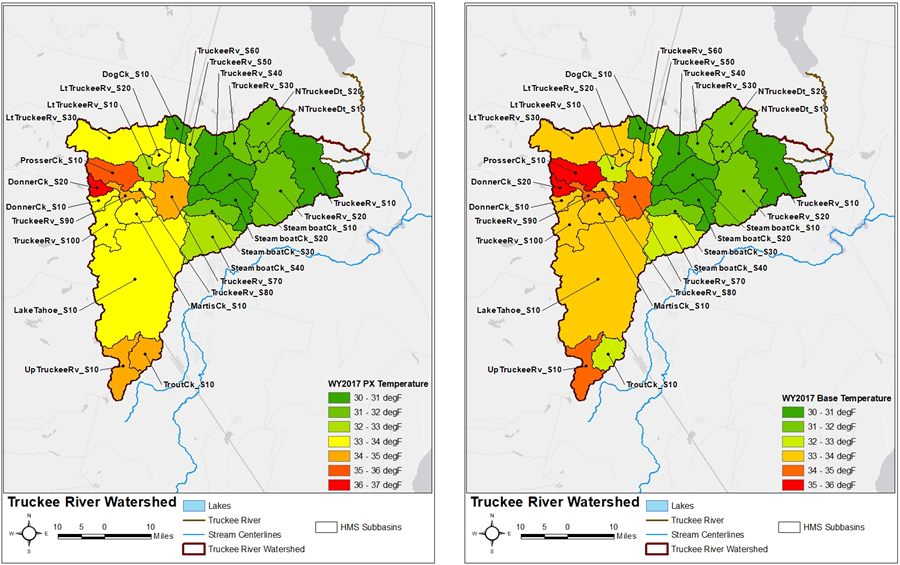 The conversion of precipitation to runoff was then simulated throughout the Truckee River watershed.  Two large flood events occurring in January 1997 and December 2005 along with the entire WY2017 were simulated throughout the Truckee River watershed.  Runoff and reservoir/lake pool elevations computed by HEC-HMS were compared against observed data obtained from the USGS, USACE, and U.S. Bureau of Reclamation, as shown in Figure 12. 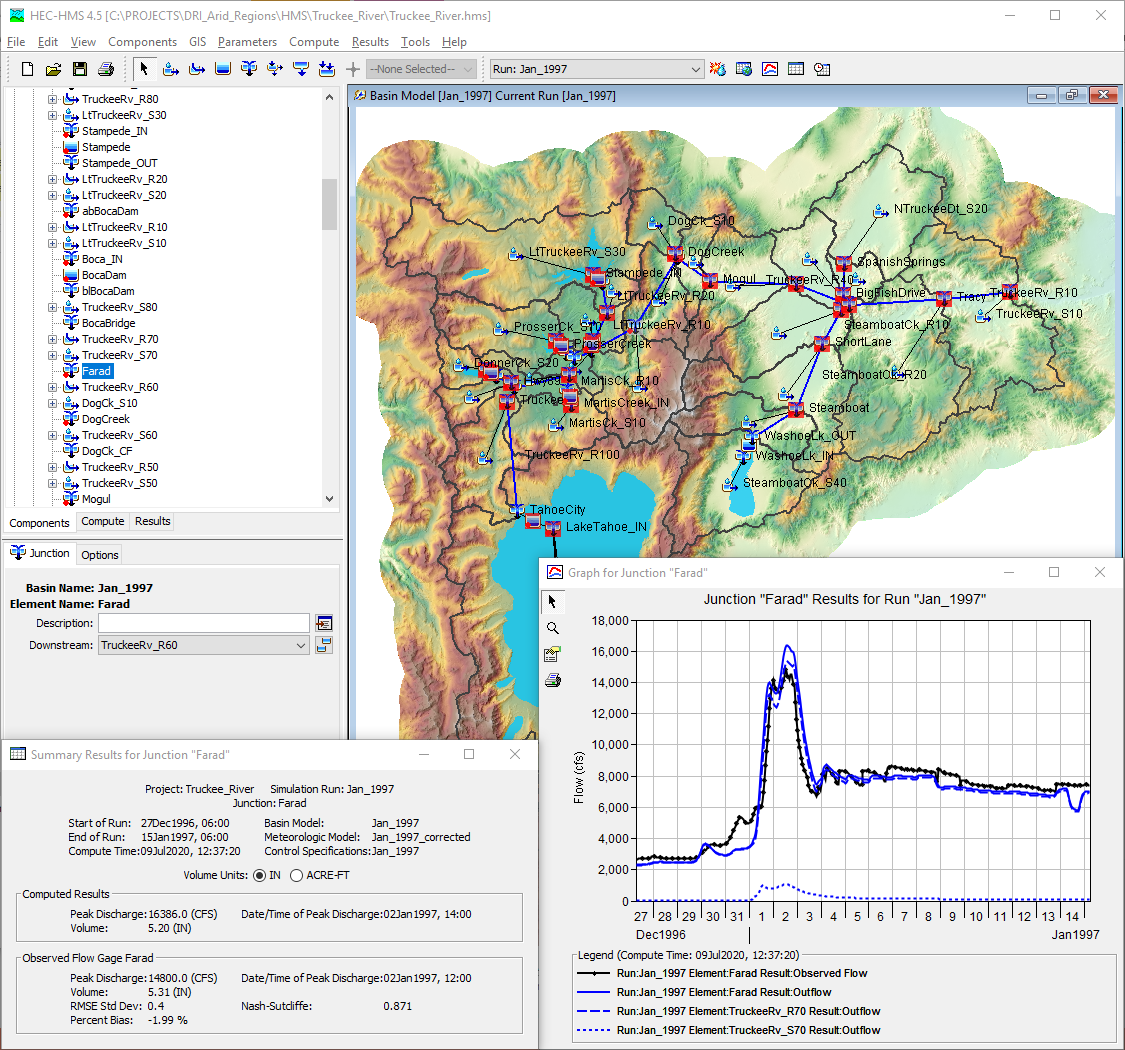 The RTI and Energy Balance snowmelt methods are currently being parameterized, calibrated, and validated using the same observed data within and surrounding the Truckee River watershed.  The same flood events (January 1997, December 2005, and WY2017) are also being simulated using the RTI and Energy Balance snowmelt methods.  The results of these simulations will allow for a direct comparison of the benefits and drawbacks unique to each snowmelt/accumulation method.  Model-derived outputs will be compared and notable differences will be identified, investigated, and described.  Finally, recommendations for selecting a snowmelt/accumulation method will be made given typical study conditions, varying levels of observed data availability, accuracy, uncertainty considerations, schedule requirements, and available budget through the use of the aforementioned comparisons.  Training materials will be developed for use within USACE training courses geared towards snowmelt/accumulation modeling.  Additionally, HEC-HMS supporting materials (user’s manual, technical reference manual, and applications guide) will be developed and included within future software releases.