The purpose of this tutorial is to provide information about the new "Interflow" option within the Linear Reservoir Baseflow Method. This new option in the Linear Reservoir baseflow method was made available starting with HEC-HMS Version 4.8. The example project can be downloaded and opened to walk through information presented below. You must use HEC-HMS 4.9, or a more recent version, to open the project. The 2D model and simulation were developed following the same procedure shown here - Creating a Simple 2D Flow Model within HEC-HMS. 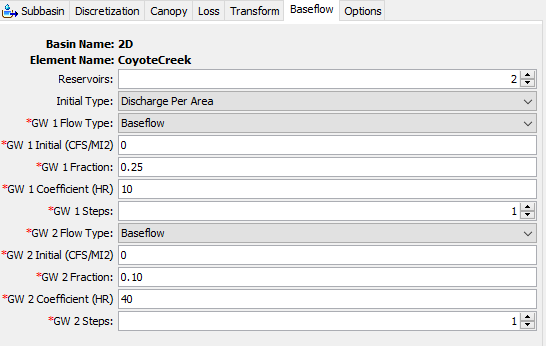 Typically, I like to use two linear reservoir layers. I use groundwater layer 1 to represent interflow, which has response times 2-5 times longer than surface flow. Interflow represent water that infiltrates, travels down slope in the soil, within the unsaturated zone, and then makes its way back onto the land surface. After reaching the land surface, the interflow water travels in the stream network to the subbasin outlet. The figure below shows possible flow paths for interflow. 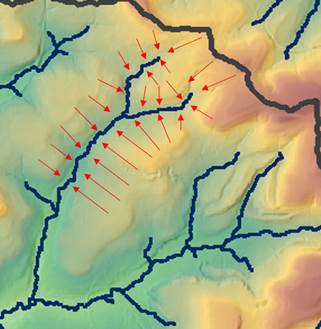 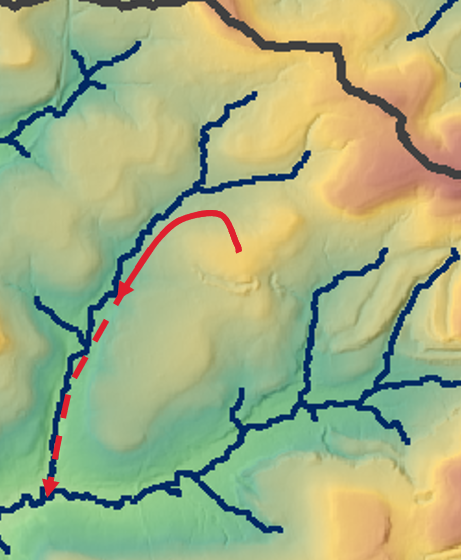 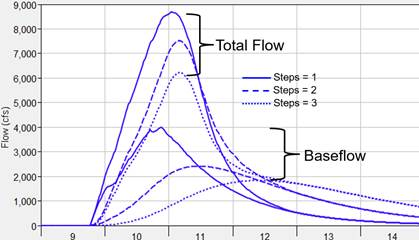 The release of HEC-HMS 4.7 provided a new a new subbasin transform method, the 2D diffusion wave transform method. The 2D diffusion wave transform method is a true cell to cell routing model, it is the same routing model (code) in HEC-RAS. After preliminary application of the 2D diffusion wave transform method to watershed scale applications, the HEC-HMS team identified the need to provide a 2D subsurface routing option that compliments the 2D diffusion wave surface routing option. This need for a integrated 2D surface-subsurface model can be illustrated using the figure below. Within HEC-HMS, baseflow from the linear reservoir baseflow method is only added to the hydrograph at the outlet of the 2D area (subbasin) and is represented by the brown dashed line in the model results shown below. Infiltrated water from all grid cells, regardless of their location in the 2D area, is routed through a linear reservoir and added to the total flow from the 2D area. We found this approach could provide adequate results at the subbasin outlet, the combination of routed surface flow and baseflow at the outlet could approximate observed flow (compare the solid blue line, computed flow, and the black line, observed flow, in the figure below). However, the 2D surface flow at interior cells would be biased low because in reality a portion of the infiltrated water does flow back onto the land surface throughout the entire watershed, not at some arbitrary location like a subbasin outlet. Notice that the simulated baseflow hydrograph adds about 20 percent of the flow magnitude to the 2D diffusion wave hydrograph at the subbasin outlet. This means that the flow/stage results for cells within the 2D mesh are lower than would be observed in this model application. It is likely that modelers will have to reduce surface roughness values within the 2D model domain to offset missing groundwater flow when calibrating a model with this type of configuration. 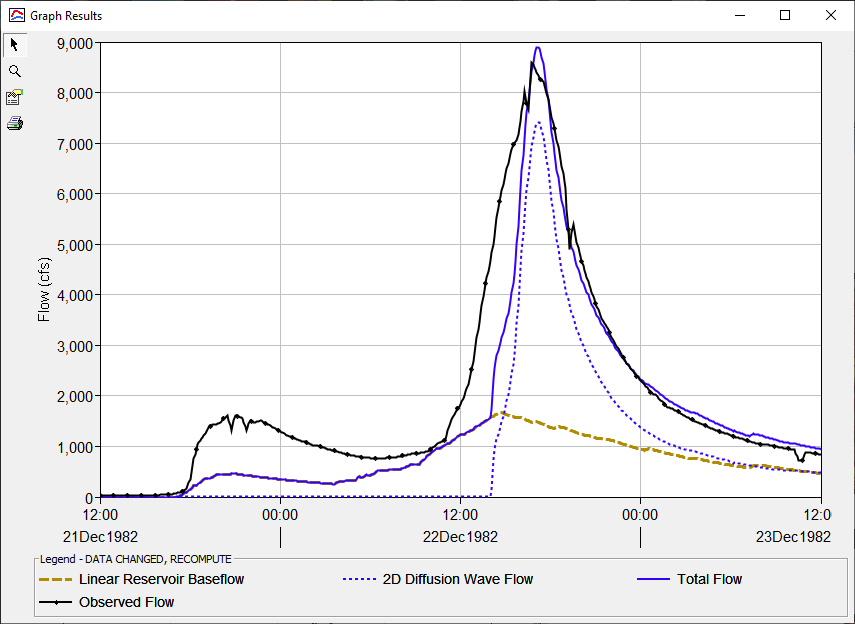 Until the HEC-HMS and HEC-RAS teams work with development partners to design and fund a true integrated 2D surface-subsurface solution, the HEC-HMS team made a modification to the linear reservoir baseflow method that allows the modeler to identify whether the Linear Reservoir groundwater layer is treated as interflow or baseflow. If the user chooses baseflow, then the routed subsurface water is added to the total flow at the subbasin outlet (outlet(s) of the 2D area). If the user chooses interflow, then the subsurface water is only routed within the 2D cell, where the infiltration happened. The routed interflow is added to the cell's surface flow and routed on the 2D surface to downstream grid cells (where it can be infiltrated again). The new interflow linear reservoir baseflow option can only be activated when the 2D Diffusion Wave transform option is selected.

It is understood this approach is conceptual and the major assumption is that all interflow leaves the cell on the surface where the infiltration happens. However, this approach does allow for improved model results for interior grid cells within the 2D area. Also, the modeler will have to adjust surface roughness values when changing to the new interflow baseflow routing option because more water will be in the channel network within the 2D area.

The area modeled in this tutorial is part of the Coyote Creek watershed in Northern California. The watershed modeled is approximately 109 square miles and is located just south and east of San Jose, CA. The location of the watershed is shown below. 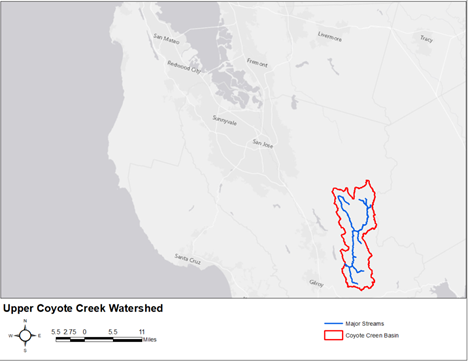 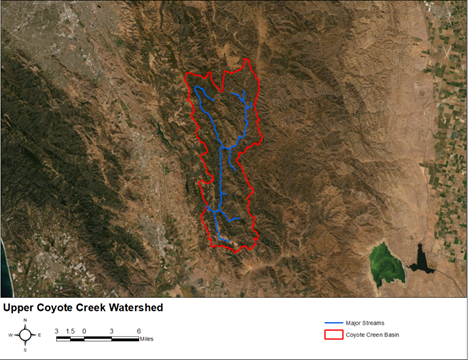 Landuse data was gathered from the National Land Cover Database (NLCD) 2016. As shown below, land uses within the watershed are mixed forest, grassland, and shrub/scrub. Soil data from the SSURGO database was used to create raster datasets of soil properties, like saturated hydraulic conductivity. The soil property datasets were used to estimate Deficit and Constant loss parameters. 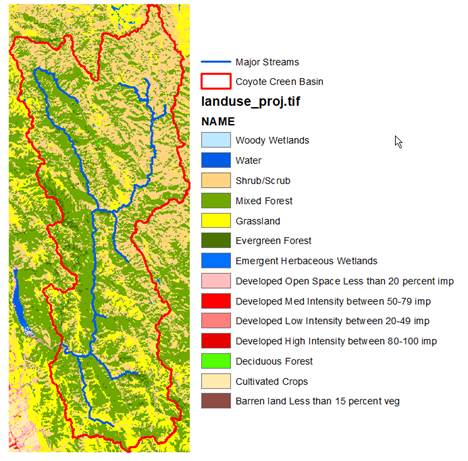 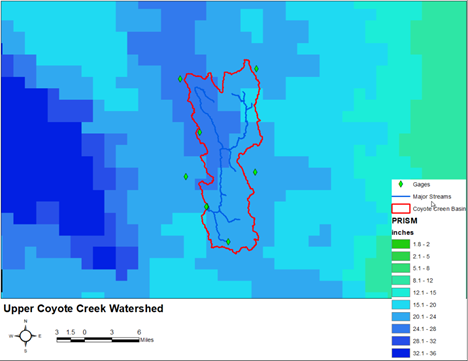 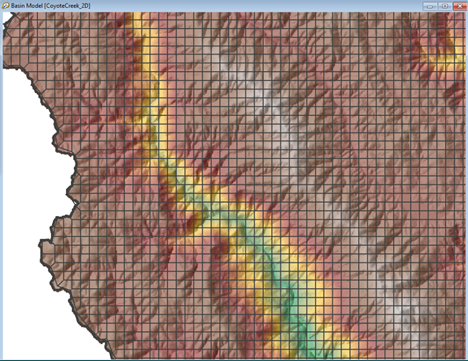 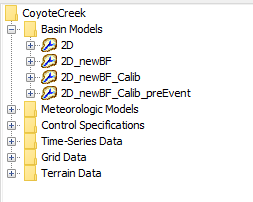 The 2D basin model was configured to use the "baseflow" option for both the groundwater 1 and groundwater 2 layers. This means the routed baseflow is only added to the routed surface flow at the subbasin outlet. The following table contains the constant loss rate and baseflow parameter values. The surface roughness values were adjusted as well during model calibration. This basin model is used within the 1982_2D simulation.

The following figure shows results at the outlet of the 2D area along with the observed flow for the 1982_2D simulation. Below, the black line is the observed flow at the outlet of the subbasin and the smaller dashed blue line is the total computed flow at the outlet. The total computed flow combines surface flow, solid blue line, and baseflow, longer dashed line. Notice how the 2D surface runoff does not make it to the outlet of the 2D area until hour 1400 on December 22. If you look at the excess precipitation time series, you will see excess precipitation was computed starting at hour 1700 on December 21. Starting the simulation with a dry 2D area causes a delay in surface runoff, but the linear reservoir baseflow option masks this result by routing the infiltrated water to the subbasin outlet (baseflow is making it to the outlet before the surface runoff). Overall, the magnitude of the total flow matches well with the observed peak. However, as discussed above, if you extract results for grid cells within the 2D area, then the computed flow and stage would be biased low throughout the 2D area. 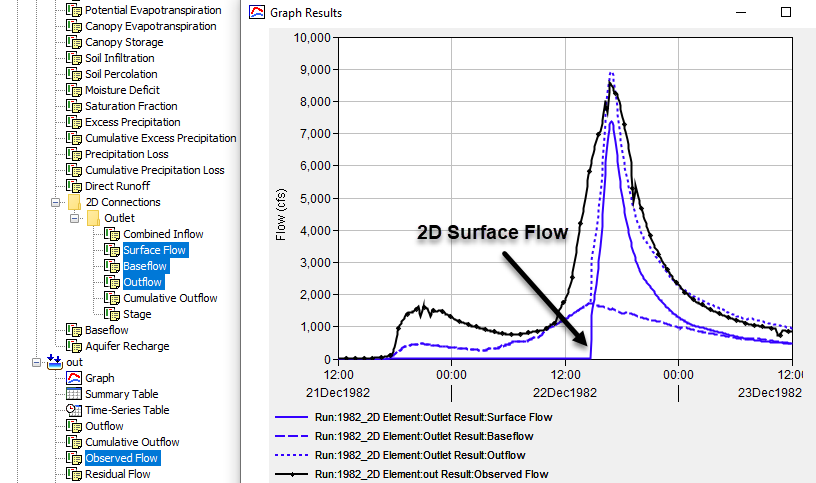 The 2D_newBF basin model was configured to use the new "interflow" option for both the groundwater 1 and groundwater 2 layers. The "baseflow" option was used for the groundwater 3 layer. This means a portion of the infiltrated precipitation was routed within two linear reservoir layers within each 2D cell (each layer had a different coefficient). The routed baseflow was passed to the surface model at the "outlet" of each cell.

The following figure shows results at the outlet of the 2D area along with the observed flow for the 1982_2D_newBF simulation. Adding the interflow baseflow output from each grid cell, along with surface runoff, and routing the surface flow to the downstream grid cells does change results significantly. The simulated peak flow is larger than in the 1982_2D simulation. This increase in magnitude is due to having more water in the channel network, and faster velocities, throughout the entire 2D area. The timing of the peak flow was 25 minutes earlier in the 1982_2D_newBF simulation than the 1982_2D simulation. The surface roughness, loss rate, and baseflow parameter would need adjustment to improve the model results (see the 2D_newbf_Calib section below).

Another note, the delay in runoff from the 2D surface model is more pronounced in this simulation since subsurface water being routed directly to the subbasin outlet is no longer masking the routing results from the surface 2D diffusion wave model. 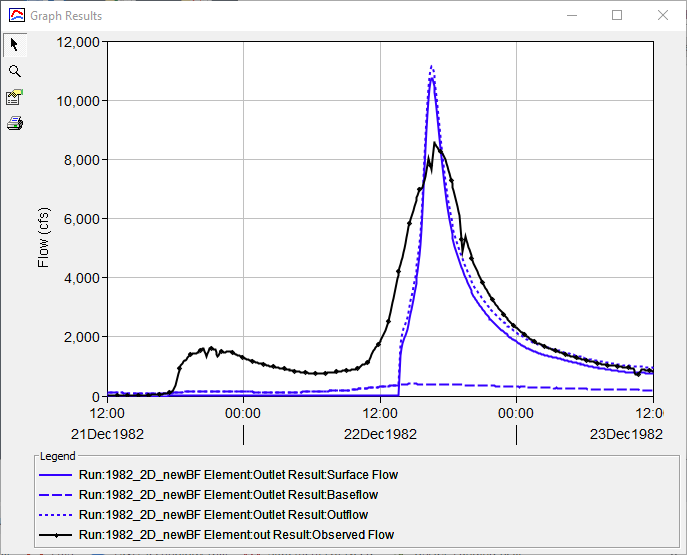 The 2D_newBF_Calib basin model started out as a copy of the 2D_newBF basin model. Changes were made to the surface roughness, terrain, constant loss rate, and the baseflow parameters to improve the model results. The following table shows the constant loss rate and baseflow parameter values. The surface roughness values were increased to reduce the flood magnitude. The new Terrain Reconditioning tool in HEC-HMS was used to burn in a stream network to improve conveyance (the original terrain dataset did not have channels included). The Preprocess Sinks tool was also used to remove any pits in the terrain. The modified terrain was used in the HEC-RAS model, along with the modified surface roughness values, to generate a new unstructured grid file, which was imported into the HEC-HMS project. This basin model is used within the 1982_2D_newBF_Calib simulation.

The following figure shows results at the outlet of the 2D area along with the observed flow for the 1982_2D_newBF_Calib simulation. Calibrating the model does result in a better fit to the peak flow, the time of the peak flow is slightly lagged, due to larger surface roughness values. The more important point with results from this simulation is that output from 2D surface flow better represents observations at the subbasin outlet. There is some integration of surface flow and the interflow component of subsurface flow occurring throughout the 2D area. Therefore, flow and stage at interior locations will be more accurate than the original simulation where all subsurface flow was added to surface runoff at the outlet of the subbasin. If you only need results at the outlet of the 2D area, then utilizing the interflow linear reservoir baseflow option might not provide a benefit.

The delay in surface runoff is still pronounced in this simulation. The following section shows a method for improving runoff at the beginning of the storm event. 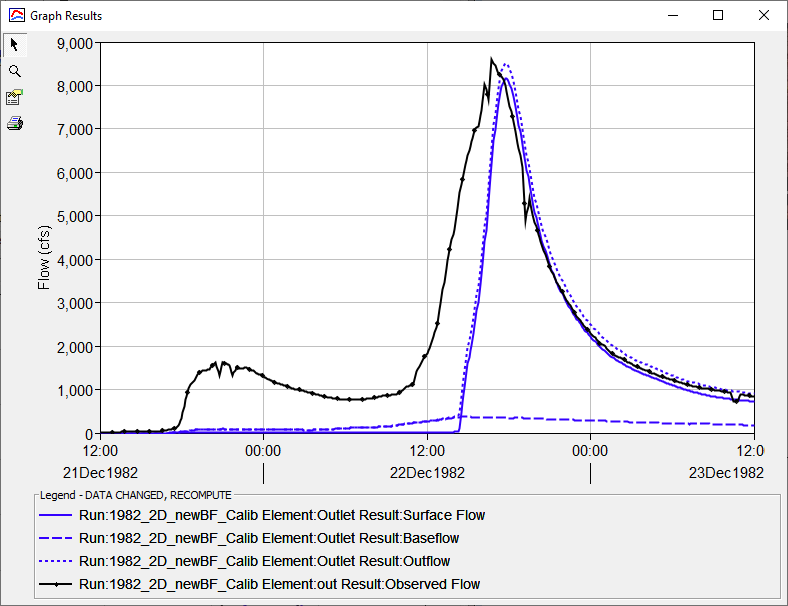 As shown in the figure below, the time window for the 1982_2D_newBF_Calib_preEvent simulation was extended to include precipitation occurring approximately 12 hours prior to the actual precipitation on December 21 and 22. This pre event was used to initialize the 2D area so that a small amount of water was already on the surface when the actual flood event occurred. Therefore, precipitation from the actual event being model would not be lost to natural storage in the stream network. 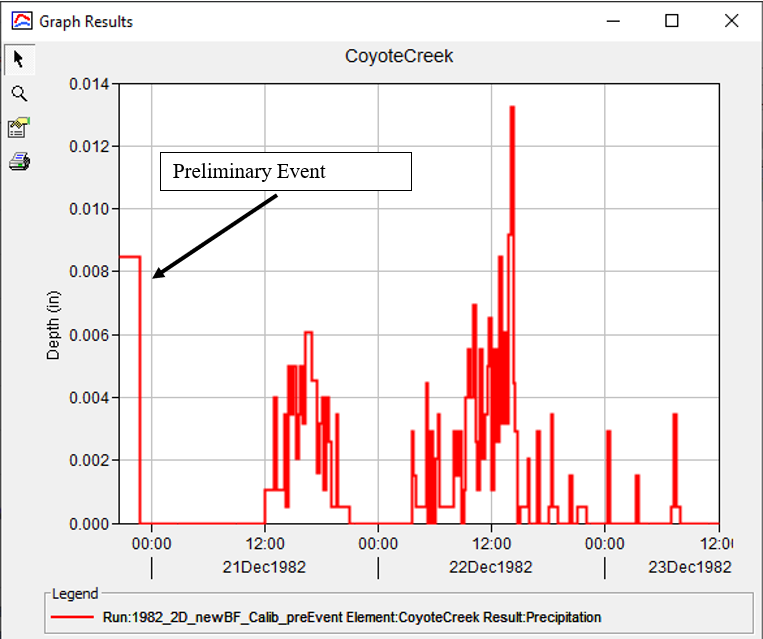 The following figure shows results at the outlet of the 2D area along with the observed flow for the 1982_2D_newBF_Calib_preEvent simulation. All basin model parameters were kept the same as the 2D_newBF_calib basin model except the constant loss rate was increased to 0.258 inches per hour. Adding a warmup period that included artificial precipitation filled streams and channels in the 2D area so that the surface response to the actual rainfall on December 21 and 22 was more realistic. 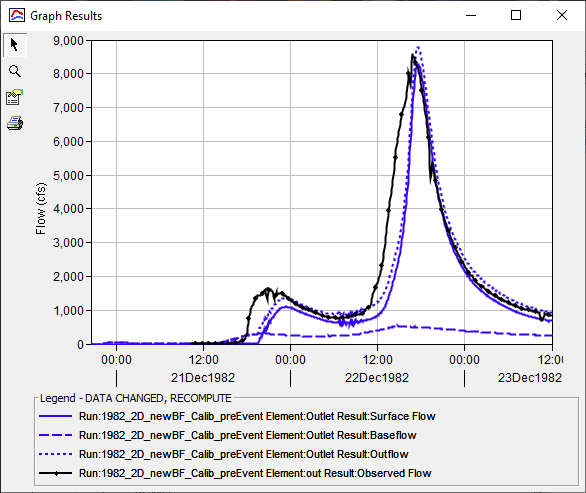