This guide provides step-by-step instructions that can be used to create a new HEC-HMS project, delineate a subbasin element, and compute a runoff hydrograph using the new 2D Diffusion Wave transform method.

This example will use the Redwood Creek watershed upstream of the United States Geological Survey (USGS) gage near Muir Beach, CA (11460151; https://waterdata.usgs.gov/ca/nwis/uv?site_no=11460151).  Redwood Creek originates along the southern slopes of Mount Tamalpais which is located approximately 10 miles north of San Francisco, CA.  After flowing through Muir Woods National Monument, Redwood Creek empties into the Pacific Ocean near Muir Beach, CA, as shown in Figure 1.  The watershed upstream of the USGS gage consists of approximately 7.1 square miles of steeply sloped terrain that is primarily covered by evergreen and deciduous forests. 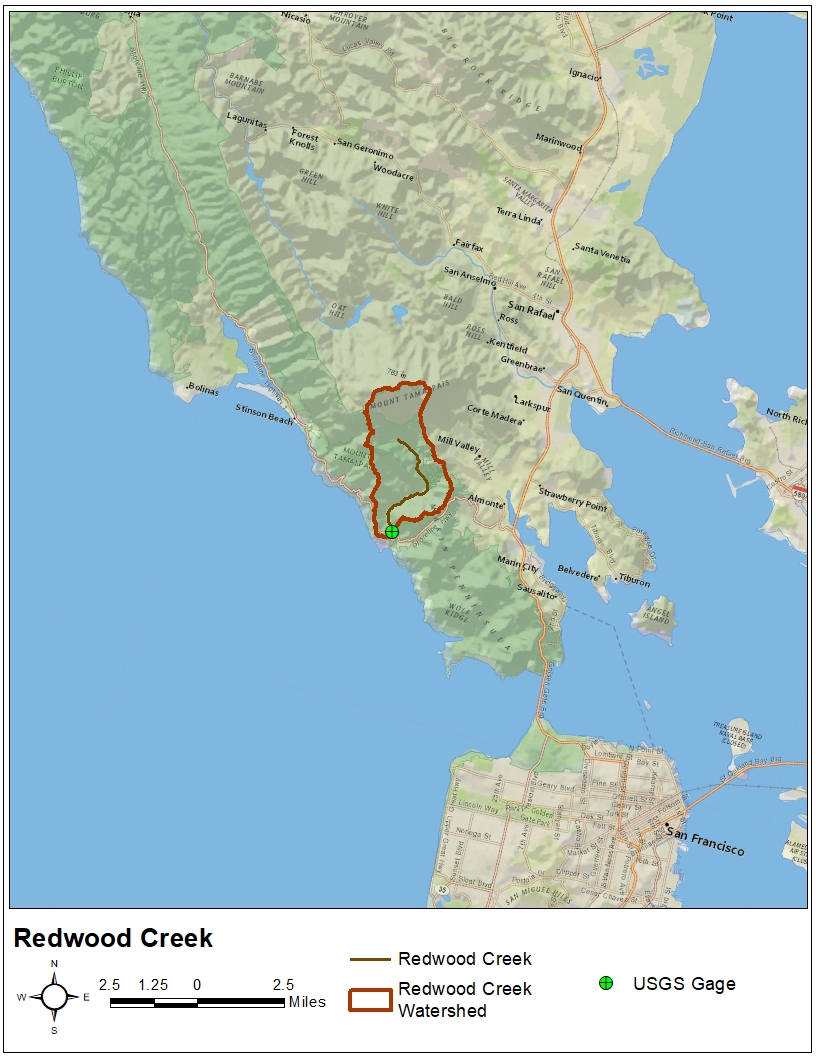 Multiple pieces of input data are needed to compute runoff for the time period of interest.  These data are detailed in the following sections.

Streamflow data for the previously mentioned gage was downloaded from the USGS National Water Information System (NWIS) database using plugins available within HEC-DSSVue.  These plugins import data from the USGS NWIS database and create new time series records within a DSS file.  Specifically, the instantaneous peak streamflow, daily average flow, and 15-min flow time series for early April 2018 were downloaded and are shown in Figure 2.  This time period will be used to calibrate the HEC-HMS model. 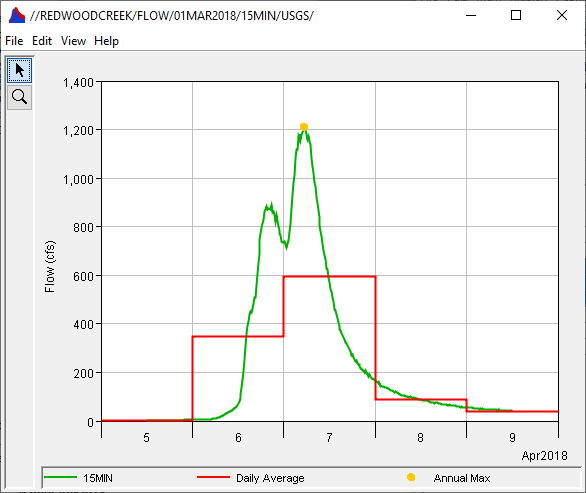 A 1/9th arc-second digital elevation model (DEM) was downloaded from the USGS National Map Viewer: https://viewer.nationalmap.gov/basic/.  Within the area of interest, 1/9th arc-second equates to a horizontal resolution of approximately 3 meters.  The DEM was first clipped using a buffered polygon that surrounded the area of interest.  Then, the DEM was projected to the Albers Equal Area Conic coordinate system and the vertical units were converted to feet.  The resultant DEM is shown in Figure 3. 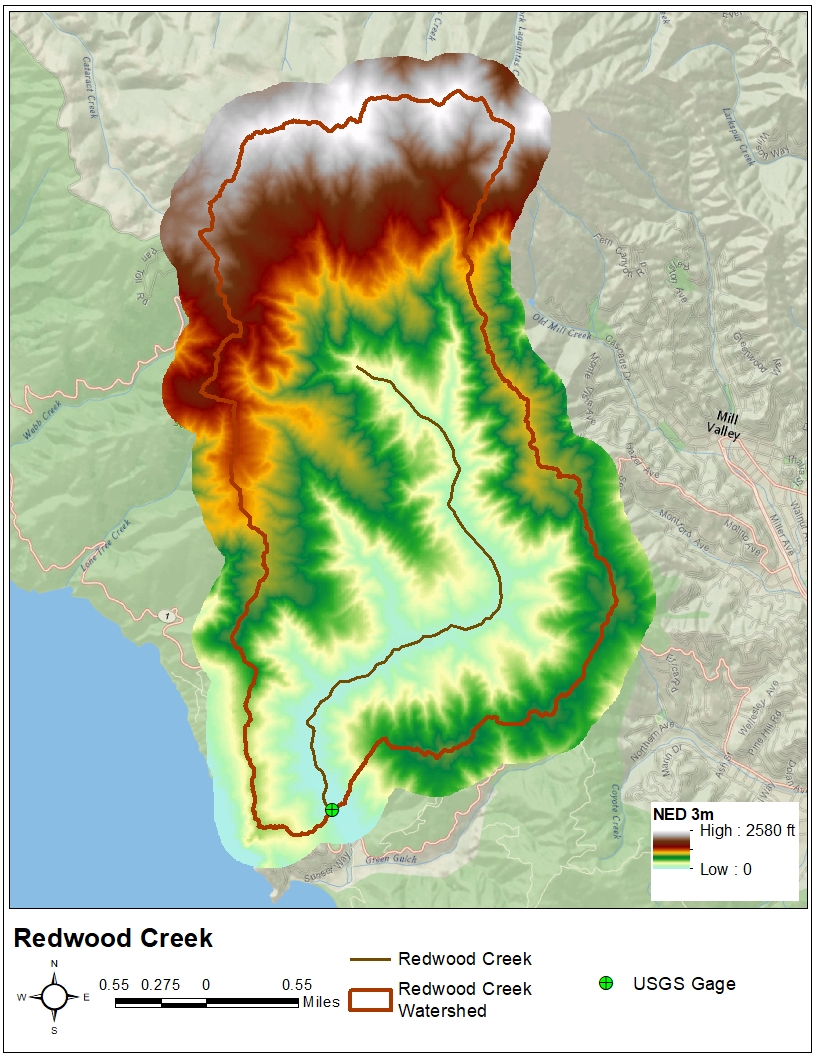 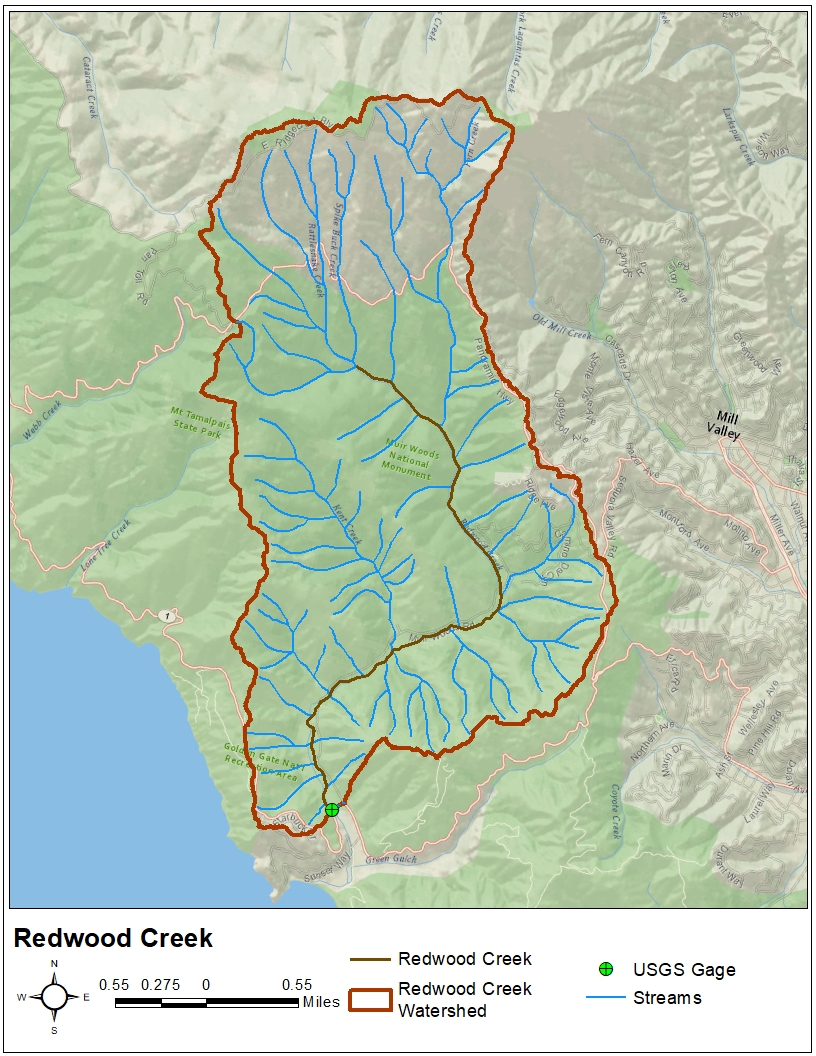 Land use classifications were downloaded from the Multi-Resolution Land Characteristics Consortium: https://www.mrlc.gov/data?f%5B0%5D=category%3Aland%20cover.  The National Land Cover Database (NLCD) 2016 version represents the most up-to-date nationwide source for land cover classifications.  Within the area of interest, land uses range from developed spaces to emergent herbaceous wetlands.  As was previously stated, the predominant land uses within the area of interest are deciduous and evergreen forests.  The NLCD 2016 land cover classifications are shown in Figure 5. 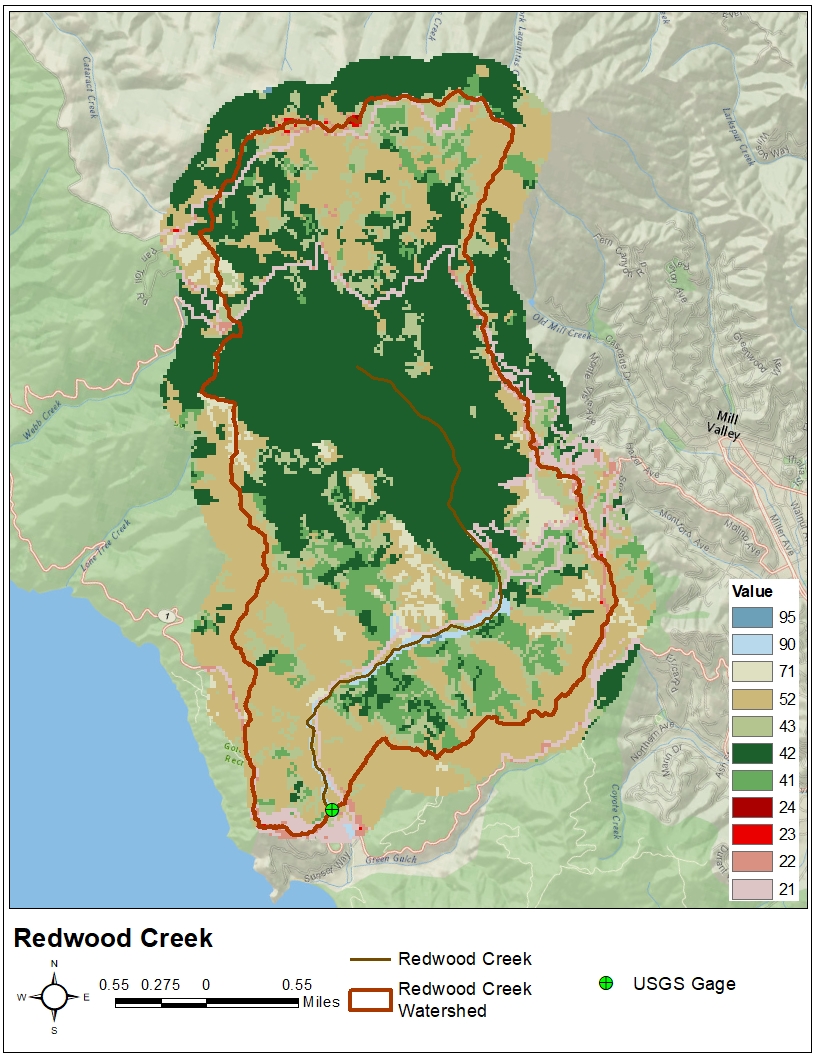 Hourly Multi-Radar/Multi-Sensor (MRMS) precipitation for April 2018 was downloaded from the Iowa State University Iowa Environmental Mesonet: https://mesonet.agron.iastate.edu/.  MRMS precipitation data is created by combining data from multiple sources including radar stations, surface and upper air observations, lightning detection systems, and satellite and forecast models.  In general, this data represents the spatial and temporal distribution of precipitation at an hourly time step very well.  However, precipitation accumulations can be underpredicted within mountainous areas when compared against runoff observations.

In order to correct the hourly MRMS precipitation accumulations, Parameter-elevation Regressions on Independent Slopes Model (PRISM) precipitation for April 2018 was also downloaded: https://prism.oregonstate.edu/.  In general, this data better represents the spatial and temporal distribution of precipitation at a daily time step better than MRMS.

Both the MRMS and PRISM data was projected to the Standard Hydrologic Grid (SHG), clipped to the area of interest, and converted to DSS format using Vortex: https://github.com/HydrologicEngineeringCenter/Vortex.  Then, Vortex tools were used to "correct" the raw MRMS data using the PRISM data.  In essence, each grid cell within the MRMS data set was adjusted to to equal the corresponding grid cell within the PRISM data set.  Basin-average hyetographs were extracted for the raw MRMS data, PRISM data, and the corrected MRMS data and are shown in Figure 6.  Note that the basin average hyetographs are for visualization only; the HEC-HMS model will make use of the gridded data. 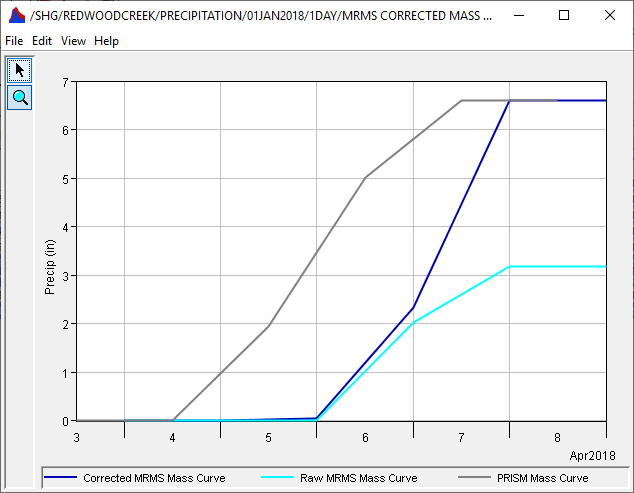 To utilize the 2D Diffusion Wave transform within HEC-HMS, the subbasin elements of interest must be georeferenced.  New GIS features have been recently added to HEC-HMS to aid in this process.  These features allow the user to create an HEC-HMS model from scratch, georeference existing basin model elements using shapefile information, and/or update subbasin and reach delineations.

A new HEC-HMS project was created, a new basin model (called "Apr2018") was created, and the previously mentioned terrain data was added and associated with the new basin model.  The HEC-HMS GIS tools were then used to delineate a single subbasin element encompassing the entire watershed upstream of the Redwood Creek USGS stream gage and a sink at the gage location (called "MuirBeach").  The HEC-HMS project is shown in Figure 7. 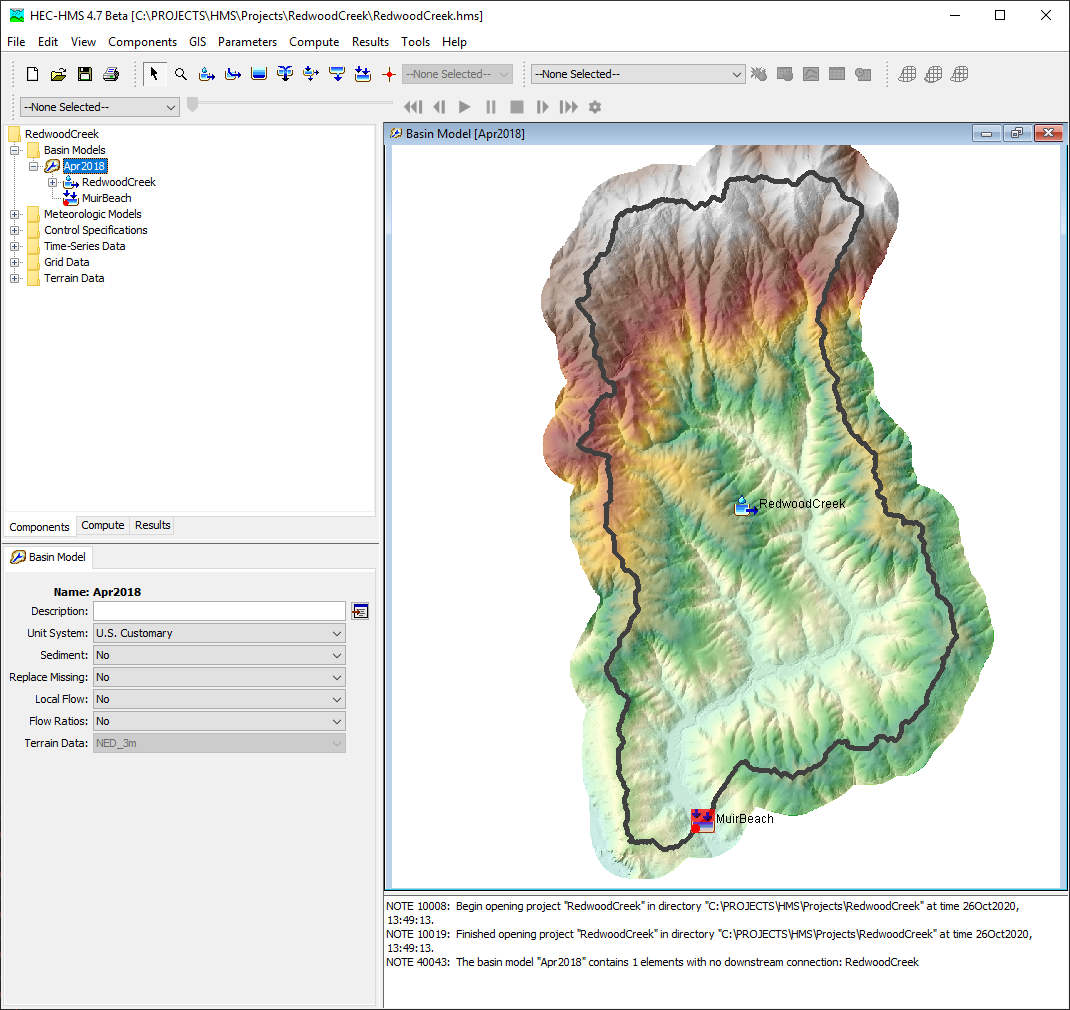 The "RedwoodCreek" subbasin was then exported as a shapefile using the GIS | Export Georeferenced Elements tool.

The Deficit and Constant Loss, 2D Diffusion Wave, and Linear Reservoir baseflow methods were selected for use within this example.  Initial estimates for each parameter within the aforementioned methods were then made and are shown in the following tables:

Creating a Mesh and Boundary Conditions within HEC-RAS

Currently, users must create a 2D mesh and any associated normal depth, flow, stage, and/or rating curve boundary conditions within HEC-RAS (version 5.0.7 or newer) and then import to HEC-HMS.  In the future, users will be able to create and modify both 2D meshes and boundary conditions entirely within HEC-HMS.

To create a 2D mesh within HEC-RAS, a new project was started and an empty, new Geometry file (called "base") was created.  Next, RAS Mapper was opened and the previously mentioned terrain data was imported and associated with the new geometry.  Then, a single 2D Area (called "RedwoodCreek") was created using the subbasin shapefile, which was previously exported from HEC-HMS.  Computation points were then created within the HEC-RAS | Geometric Data editor using a 250 ft x 250 ft spacing.  Finally, a single Boundary Condition line (called "Outlet") was added along the mesh boundary near the USGS gage.  The 2D mesh and boundary condition line are shown in Figure 8. 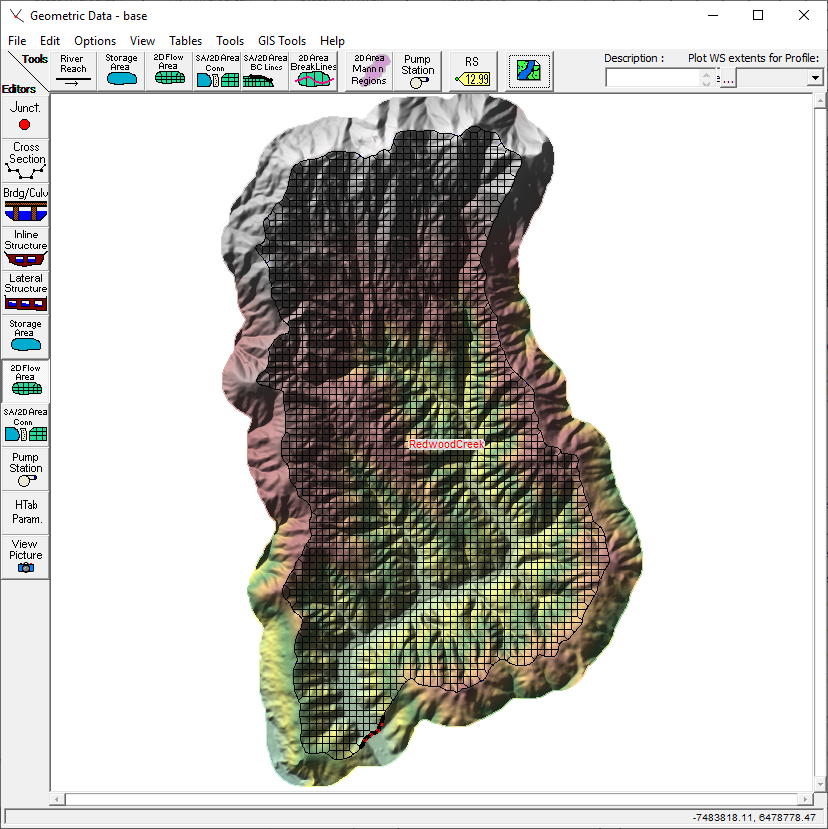 In order to better simulate the movement of water throughout the Redwood Creek watershed, a spatially distributed Manning's n Layer was created within RAS Mapper.  To allow for faster movement of water through defined stream channels, a buffered polygon layer surrounding the previously described NHD streams was created and imported to RAS Mapper.  Then, a new Manning's n layer was created by combining the previously mentioned NLCD 2016 land use classifications and the buffered streams polygon layer; the buffered streams polygon layer was placed at the highest hierarchy (i.e. overrides the NLCD 2016 land use classifications).  Initial estimates for Manning's n were assigned using the following table:

This new Manning's n Layer was then associated with the geometry and is shown in Figure 9. 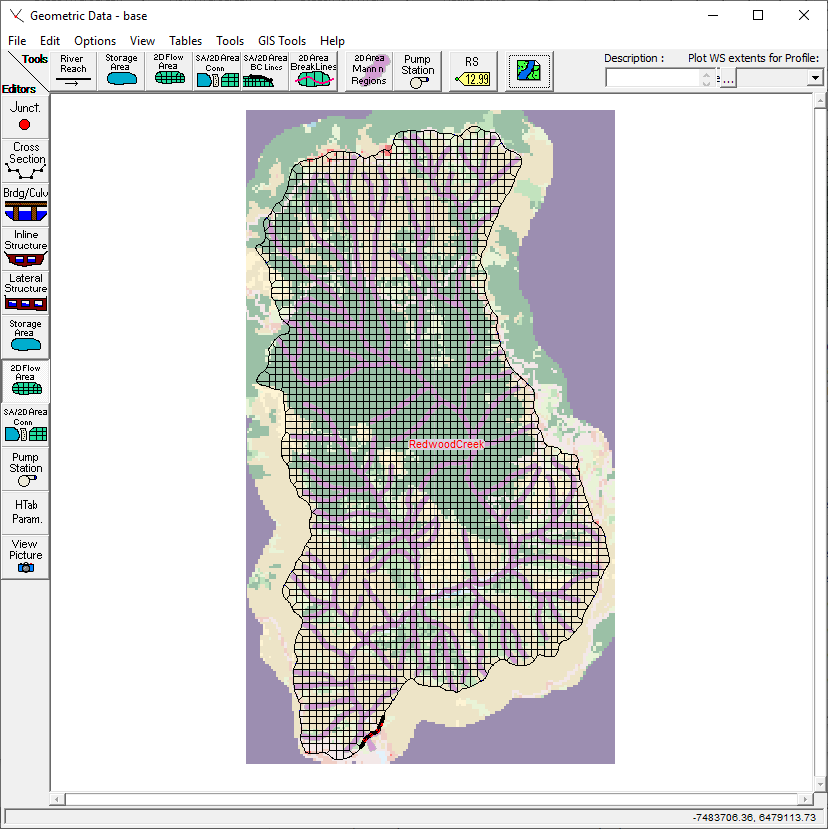 A new Unsteady Flow file was then created and two boundary conditions were parameterized: 1) 0.1 inch of spatially and temporally uniform precipitation applied to the 2D mesh and 2) a friction slope of 0.006 ft/ft was applied to the "Outlet" boundary condition line; the precipitation depth is meaningless as it is only used to allow for a successful simulation.  Next, a new Unsteady Plan was created and the previously described geometry and unsteady flow files were selected.  A valid simulation time window and computation settings were set to allow for a successful simulation.  Finally, the unsteady flow simulation was computed, which generated an Unsteady Plan HDF file, which has an extension of ".p##.hdf" where "p##" corresponds to the specific plan of interest.  This file contains the computational mesh and boundary condition line information which are currently needed by HEC-HMS.

Importing the Mesh and Boundary Condition(s) to HEC-HMS 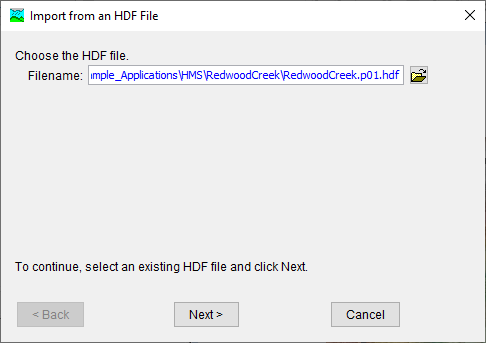 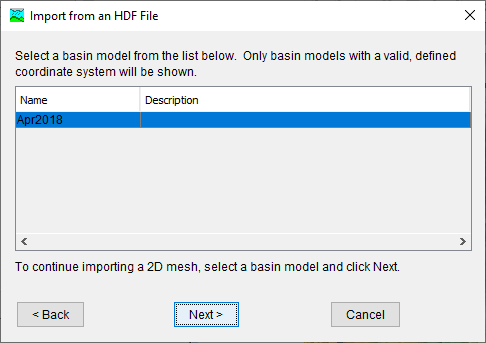 On the third panel, the "RedwoodCreek" subbasin was selected, as shown in Figure 12. 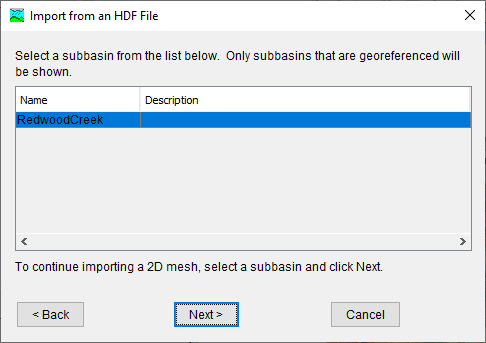 On the fourth panel, the "RedwoodCreek" 2D Mesh was selected, as shown in Figure 13. 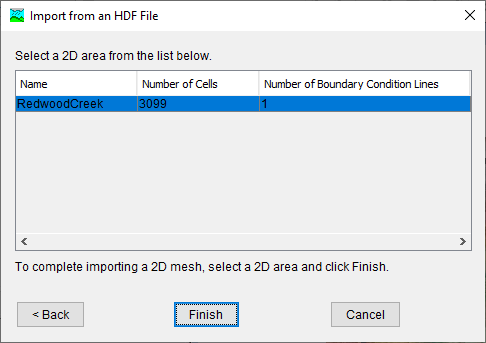 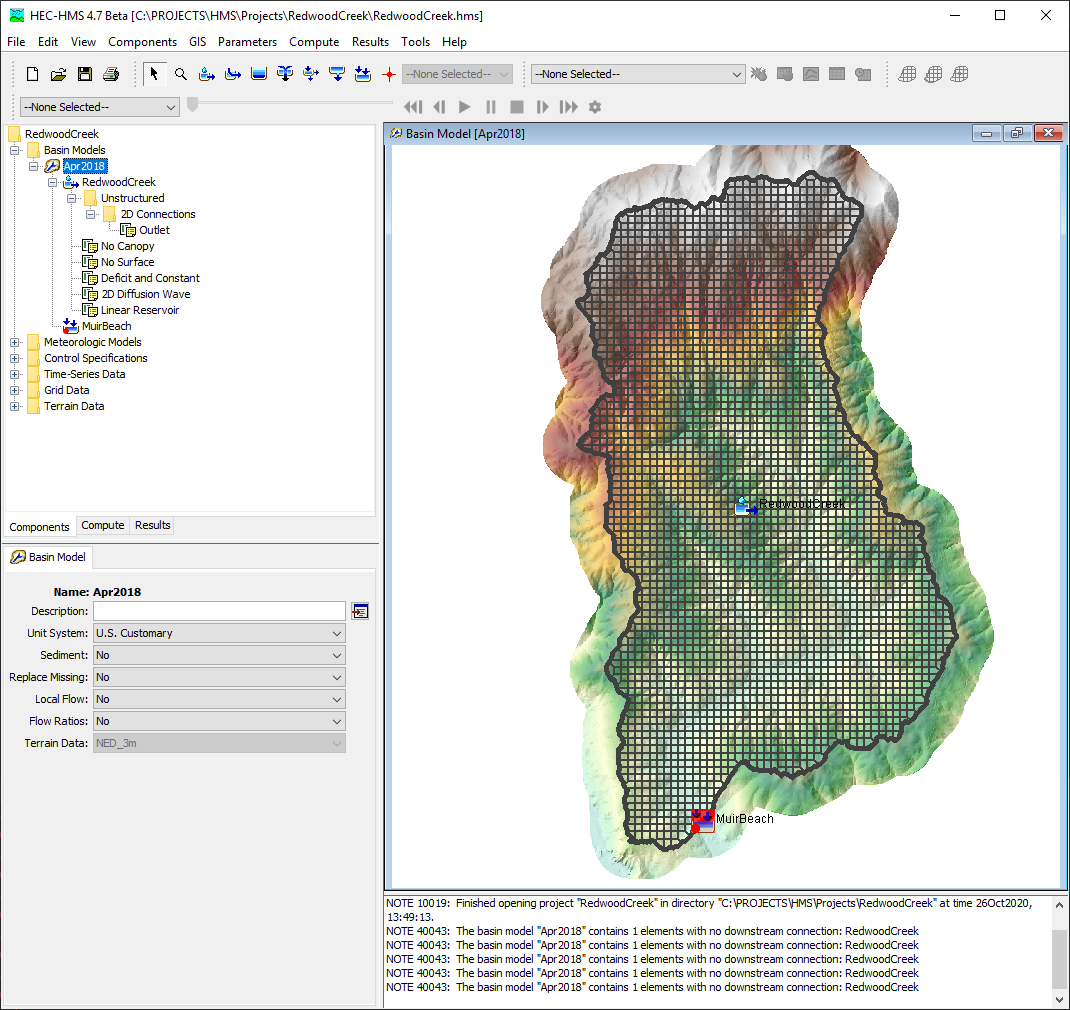 Finally, the "Outlet" 2D Connection was connected to the "MuirBeach" sink, the Type was set to Normal Depth, a Friction Slope of 0.006 ft/ft was entered, and a Ratio of Subbasin Baseflow of 1.0 was set, as shown in Figure 15.  The Ratio of Subbasin Baseflow is defined as the ratio of baseflow generated within the "RedwoodCreek" subbasin that will reach the particular 2D Connection. 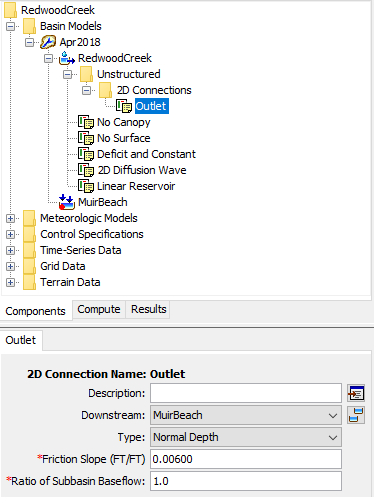 Creating a Simulation Run within HEC-HMS

A simulation run within HEC-HMS requires a Basin Model, Meteorologic Model, and Control Specification.  Optionally, observed data can be associated with any basin element.

Once the simulation run was successfully computed, results for the "MuirBeach" sink were plotted and are shown in Figure 16. 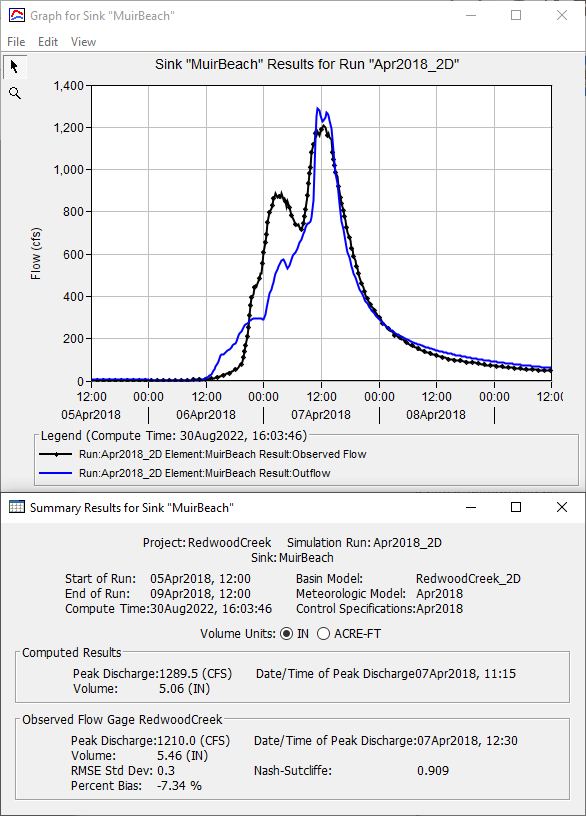 Also, time series for the "Outlet" 2D Connection were plotted and are shown in Figure 17. 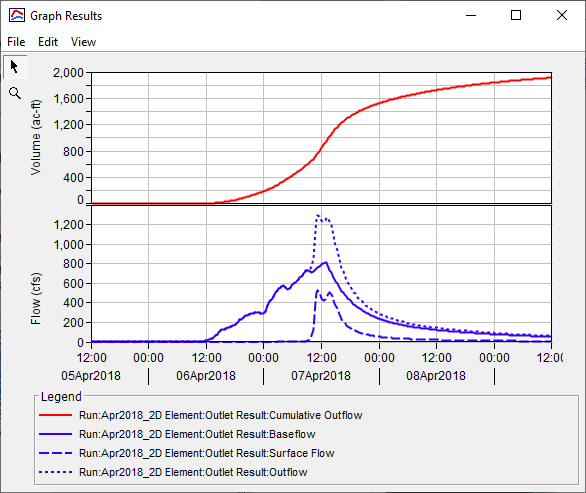 Finally, spatial variables like cell velocity can be visualized, as shown within Figure 18. 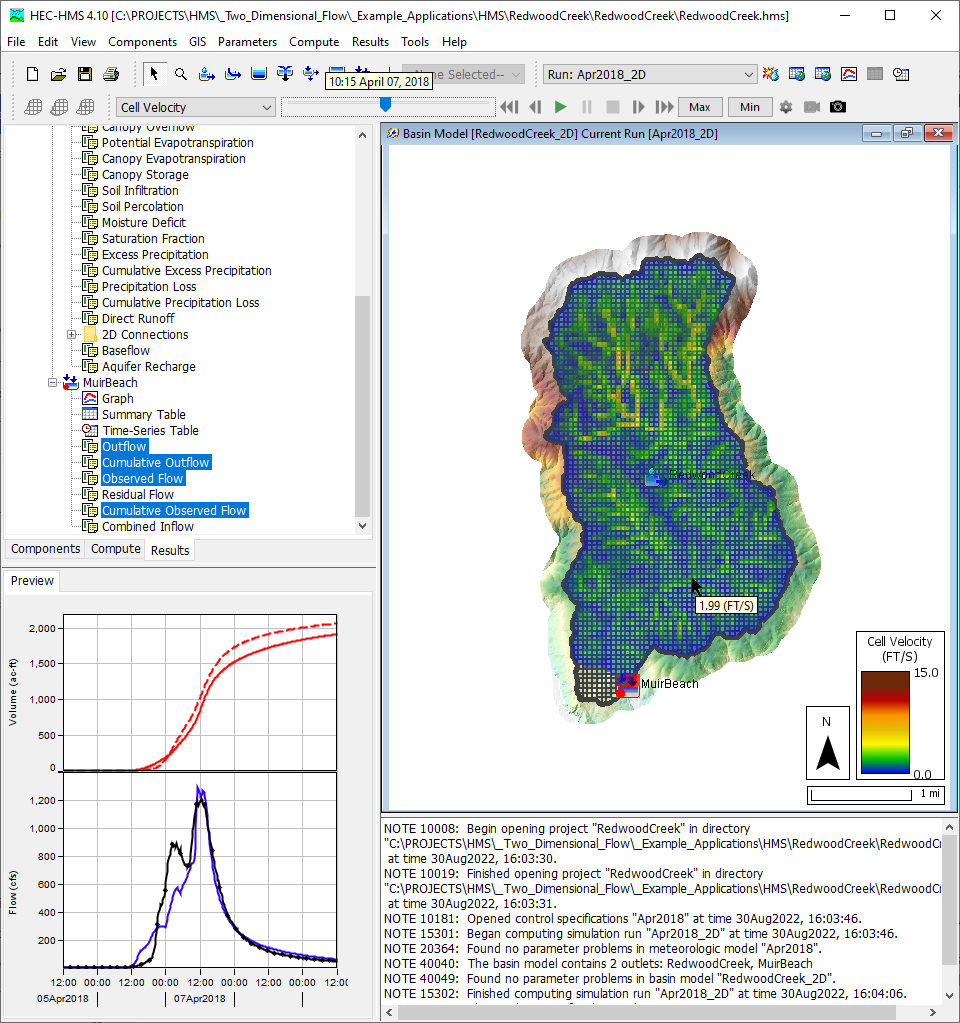 At this point, the modeler can make changes to the loss, baseflow, and 2D Connection methods/parameterizations to provide a better response throughout the watershed.  However, HEC-HMS does not currently allow the user to modify Manning's n values within a 2D mesh.  This must be accomplished within HEC-RAS by generating a new Unsteady Plan HDF file and importing to HEC-HMS.  In the future, users will be able to create and modify Manning's n Layers entirely within HEC-HMS in addition to many new features related to 2D flow.

The completed HEC-HMS project can be downloaded here: RedwoodCreek.zip.

Szilagyi, J. (2007). Analysis of the Nonlinearity in the Hillslope Runoff Response to Precipitation Through Numerical Modeling. Journal of Hydrology, 391-401.