The number of gridded data products that can be used for hydrologic modeling applications is increasing.  Modeling with gridded data is beneficial because gridded products are widely available and they have the ability to better capture the temporal and spatial distribution of gridded parameters, like precipitation, across a watershed when compared to gage measurements at a single point.

This tutorial demonstrates how Multi-Radar Multi-Sensor (MRMS) Quantitative Precipitation Estimate (QPE) gridded precipitation data can be obtained, imported, and used within HEC-HMS.  This tutorial will also show how simulated runoff changes when different data is used in an existing model of the Cannon River watershed.

The MRMS project is an automated system that rapidly integrates data from multiple Next Generation Radar (NEXRAD) stations, data networks, surface and satellite observations, and numerical weather prediction models to create gridded data records (NOAA NSSL, 2021).  MRMS is used as an operational platform by the National Weather Service and as a research platform (NOAA NSSL, 2021).  The horizontal resolution of the data is one kilometer and is available for download through the Iowa State University’s Iowa Environmental Mesonet.  Data is available in the GRIB file format.  MRMS QPE data is available from 2012 to present at a 1 hour temporal resolution.

Data can be downloaded directly from the Iowa State University's Iowa Environmental Mesonet website by selecting an appropriate pathname.  Each hourly record is provided in a compressed GZ file.  The GZ file extension can be unzipped using the 7-Zip File Manager.  Within this tutorial, a storm event spanning September 20th to 22nd, 2016 will be simulated.  As such, all hourly values for this three-day period were downloaded as shown in Figure 1.

The data was unzipped and the resulting GRIB files (“.grib2” file extension) were available to import into HEC-HMS, as shown in Figure 2.

The quality of gridded data will vary and should be assessed to ensure the information is suitable for the purpose of the model it is being applied to.  Factors such as radar beam blockage and the distance from the radar station to the storm can affect the measurement of precipitation data.  It is recommended that gridded data be compared to other data sources to determine if it is sufficient for use in a hydrologic model.  For example, gridded precipitation can be compared to point gage data to check the magnitude and timing of a rain event.  Programs like the HEC Meteorological Visualization Utility Engine (MetVue) make it easy to compare gridded data to point rainfall. 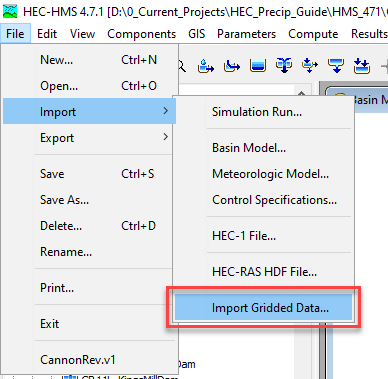 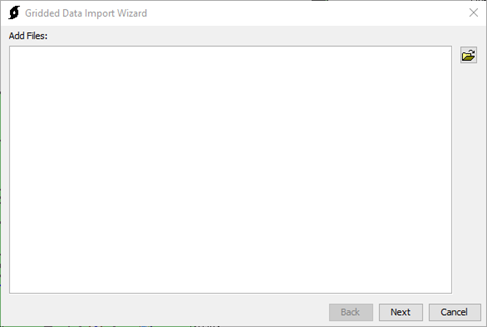 On the first panel, click the folder icon, navigate to the MRMS QPE GRIB files, select all the files (Control + A), and click “Open” to add the files, as shown in Figure 5. 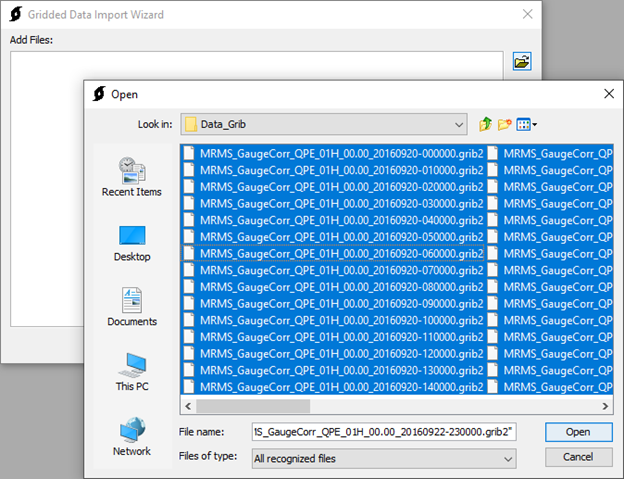 Once the raw GRIB files are added, click “Next” to confirm the selection of the files, as shown in Figure 6. 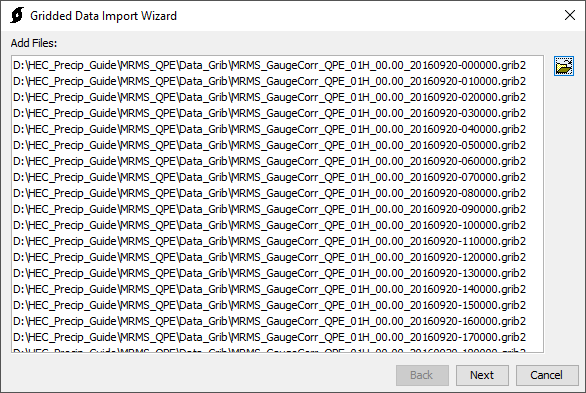 Most scientific data formats have an internal self-describing structure that organizes the data.  This includes variables, dates, extents, units, etc.  In this example, the variable “GaugeCorrQPE01H_altitude_above_msl”, which represents hourly total precipitation, was selected by double clicking (or using the arrow), as shown in Figure 7.  The “Next” button was clicked to finalize the selection. 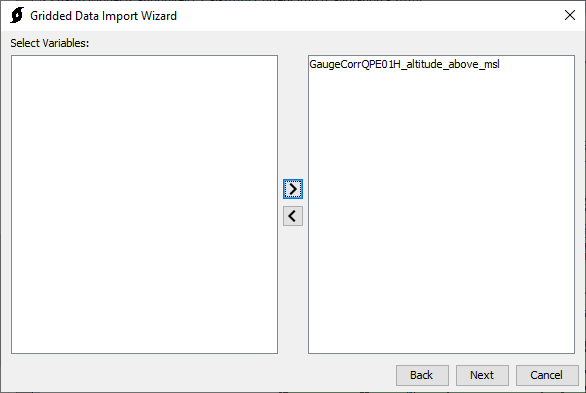 The MRMS QPE data downloaded from the IA State Mesonet website covers the entire continental United States, which is significantly larger than the watershed of interest.  In order to reduce the size of the resultant data set, the raw data was clipped using a shapefile of the watershed.  The shapefile used to clip the data source represents the subbasin shapefile from the watershed model.

Alternatively, the clipping shapefile can be created in HMS by selecting “GIS | Export Georeferenced Elements” and using the subbasin element type.  Be sure to buffer any polygon used for clipping by 1 to 2 miles.

The target wkt is a coordinate reference system (CRS) in well-known text (WKT) format. The globe button can be used to select a typical CRS.  Alternatively, a PRJ projection file from a shapefile can be used.  The CRS of the Standard Hydrologic Grid (SHG) was selected, as shown in Figure 8.

If the discretization is a file-specified “.mod” file, the gridded boundary conditions have to be the same cell size and projection that was used to generate the “.mod” file.  “.mod” files were commonly used within HEC-HMS models prior to version 4.7 that used gridded data.  The “.mod” files in earlier versions of HEC-HMS were typically generated using the Standard Hydrologic Grid (SHG) with a 2,000 meter cell size. 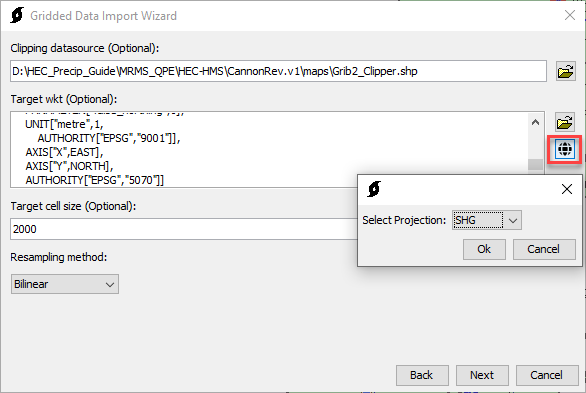 Alternatively, the model discretization could be changed from a file-specified “.mod” file to a structured discretization and a 1,000 meter grid cell size could be used. 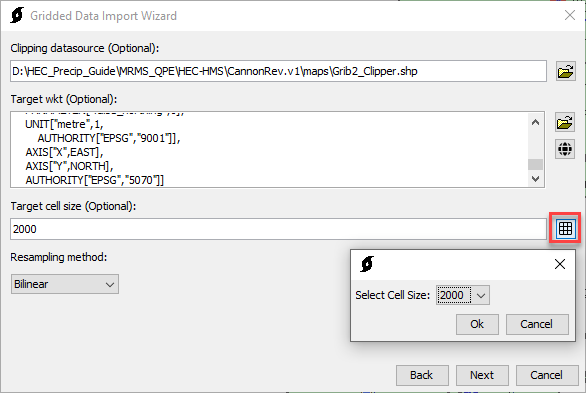 The resampling method is the method used to resample the grid.  The Import Wizard allows the user to select between the Nearest Neighbor, Average, and Bilinear method.  A description of each method is included below.  Select the bilinear resampling method for continuous data like precipitation.  Click “Next” once the clipping source, CRS, cell size, and resampling method are selected.

The Gridded Data Import Wizard will now import the raw gridded MRMS QPE GRIB data and convert it to a DSS file format.  The last step is to select a destination of the DSS file that will store the gridded data obtained from MRMS QPE.  Navigate to a directory to store the data, provide a file name with a “.dss” extension, and click “Open”, as shown in Figure 10. 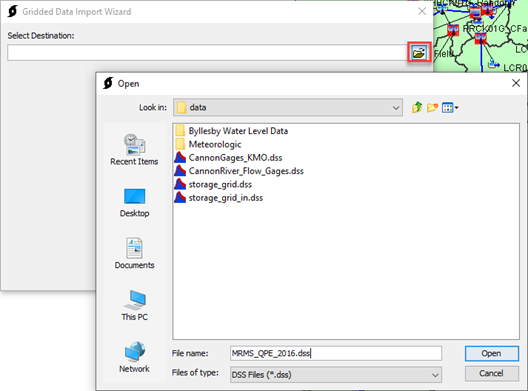 The Gridded Data Import Wizard will now allow the pathnames of the data to be defined.  Note that the C-, D-, and E-Parts of the pathnames use the wildcard asterisk because the program automatically names these parts based on the type and timestep of the data.  The user can specify the A-, B-, and F-Parts which represent the grid type, geographic area, and data source, respectively.  An example for this study is shown in Figure 11 for the Cannon River watershed study area.  Click “Next” to run the Import Wizard which creates the DSS file and converts the MRMS QPE GRIB data to DSS format for use in HEC-HMS.  The time to complete this process varies depending on the amount of data but typically takes less than one minute. 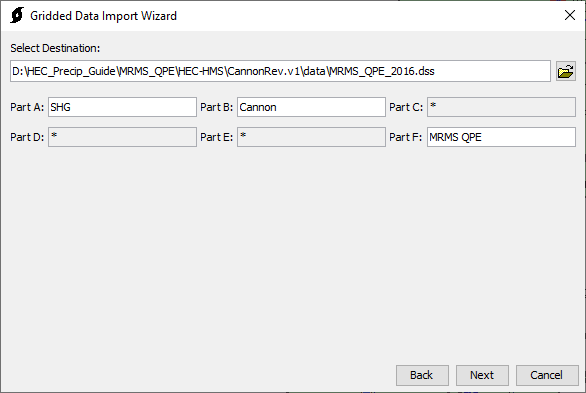 The Gridded Data Wizard will indicate when it has finished importing the data, as shown in Figure 12.  After the import is complete, click “Close” to exit the Gridded Data Import Wizard. 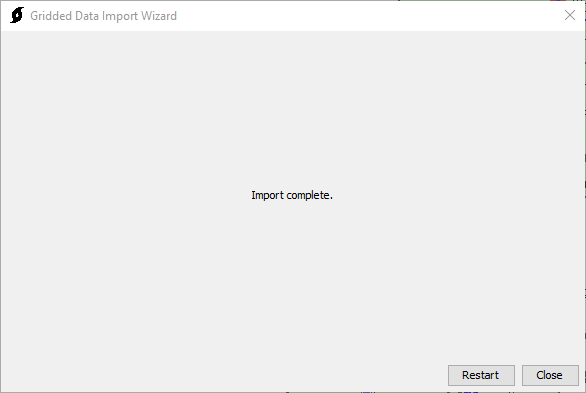 This demonstration uses an HEC-HMS model of the Cannon River watershed in Southeast Minnesota which was developed to support a Floodplain Management Services Program study.  The model was constructed using HEC-HMS version 4.2.1 which used a file-specified “.mod” file for the discretization.  The model was originally calibrated using NEXRAD Multi-sensor Precipitation Estimator (MPE) hourly gridded precipitation data obtained from the National Weather Service North Central River Forecast Center (NCRFC).  The new MRMS QPE precipitation grids use an hourly timestep and will replace the NCRFC MPE grids.  This will illustrate how the results change when different data sources are used in the model.  Model parameters are held constant with the exception of the newly imported MRMS QPE precipitation data.

A parameter grid must be created to store the grid data.  Within HMS, select “Components | Create Component | Grid Data…” to generate a parameter grid.  Provide a recognizable name and a description of what the data represents.  The data type should be “Precipitation Gridsets”.  Click “Create” to add the new precipitation grid to the HMS model, as shown in Figure 13.

The Grid Data Object created in the previous step is now available within the “Grid Data | Precipitation Gridsets” tree in HMS.  Select the “MRMS_QPE_2016” grid created in the previous step.  The data source should be set to “Single Record HEC-DSS”.  The DSS Filename should be the pathname of the “MRMS_QPE_2016.dss” file and a single pathname from the DSS file needs to be selected, as shown in Figure 14.  Any pathname within the DSS file can be selected here.

Select the “2016 MRMS QPE” meteorologic model from the Meteorologic Models tree.  Select the “Gridded Precipitation” option within the Precipitation drop down menu and set the Replace Missing option to “Set to Default”; this allows the simulation to continue if a timestep with missing data is encountered, as shown in Figure 17. 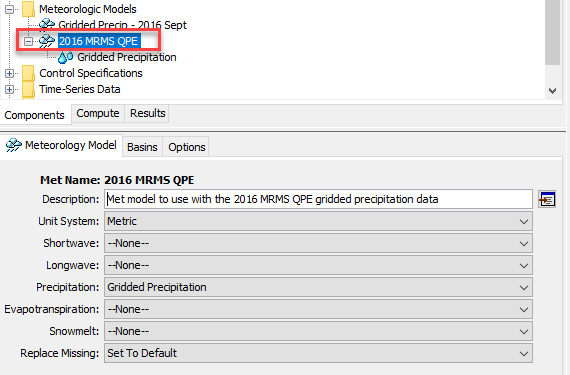 Click the “Basins” tab of the “2016 MRMS QPE” Meteorological Model and ensure that the basin model that will be used for a simulation is set to “Yes”.  In this case the basin model used is the “CannonRev1_Cal-2016” model, as shown in Figure 18.

Within the “2016 MRMS QPE” Meteorological Model, highlight the “Gridded Precipitation” icon.  Select the “MRMS_QPE_2016” option within the Grid Name drop down menu, as shown in Figure 19.

Setup a simulation run which uses the MRMS QPE data grid, a basin model, a meteorological model, and control specifications.  For this exercise, the existing 2016 basin model and control specifications will be used rather than creating separate model components.  “Select Compute | Create Compute | Simulation Run…” to access the Create a Simulation Run Wizard, as shown in Figure 20. 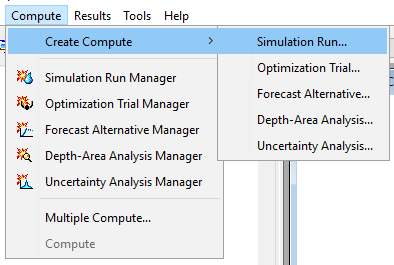 Provide a descriptive name for the simulation run, as shown in Figure 21.  Click “Next”. 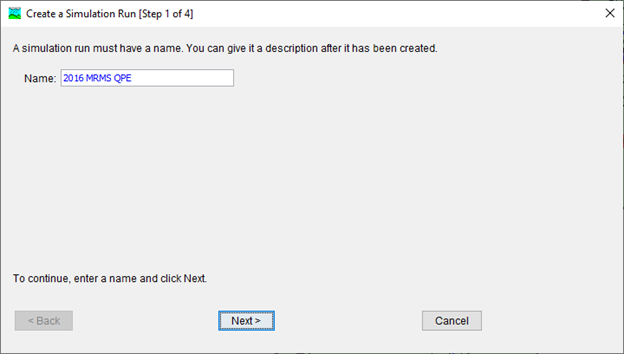 Select a basin model to use with the simulation run.  In this case, the calibrated basin model for the 2016 event (“CannonRev1_Cal-2016”) is selected for an easy comparison to show how different precipitation sources affect the results, as shown in Figure 22.  Click “Next”. 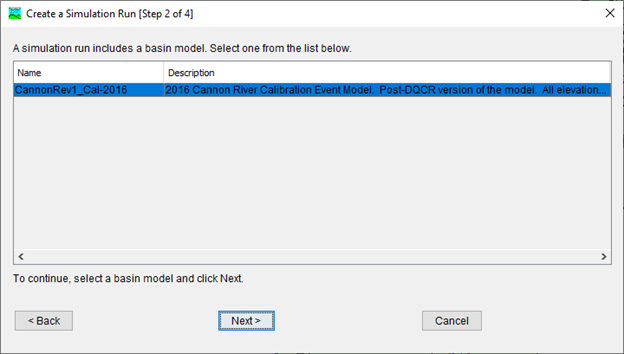 Select the meteorological model which uses the 2016 MRMS QPE data, as shown in Figure 23.  Click “Next”. 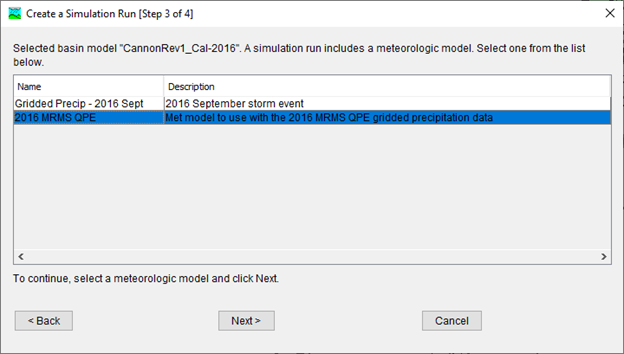 The final step is to select the control specification.  For this case, the existing “2016-Sept” Control Specifications were used for this simulation, as shown in Figure 24.  Click “Finish”.  The simulation run is now created and ready to use. 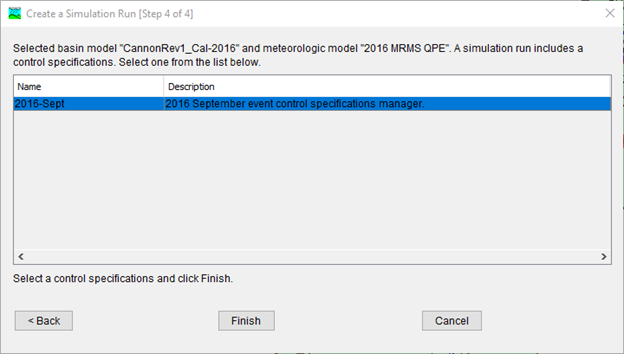 Select the run that was just created from the Simulation Run drop down box, as shown in Figure 25.  Press the compute button to perform a simulation.  In this example, the simulation computed in less than 10 seconds.

Visualize results by right clicking on an element of interest and select “View Results | Graph”.  Results from the “2016 MRMS QPE” simulation are shown in Figure 26 while Figure 27 shows the results obtained when using the original NCRFC MPE hourly precipitation data.  As the graphs show, there is a considerable difference in peak flow when different data sources are used.  All model parameters were held constant and the only difference between the two scenarios is the source of the precipitation data.  The primary source of difference between the two simulations is the total amount of rainfall that occurred during the September 20th – 22nd period which was the main storm event.  The STR05 subbasin upstream of the STR01G_Faribault gage shown in the images below indicates that 5.16 inches of rain fell when the MRMS QPE data is used in the model.  This same subbasin shows a total rainfall of 4.94 inches for the September 20th – 22nd period when the original NCRFC MPE gridded data is used. 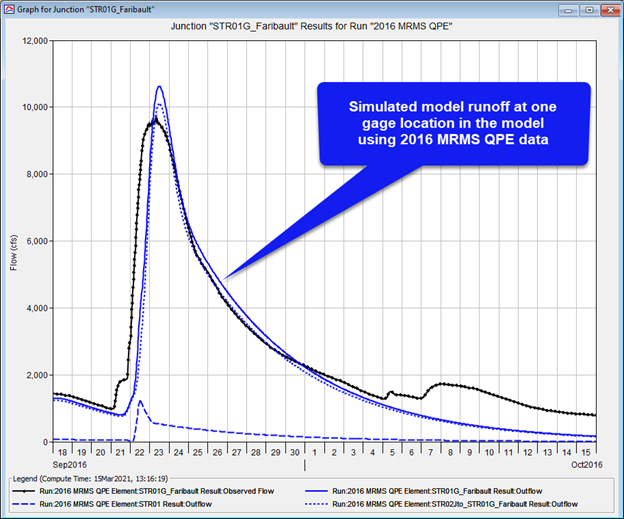 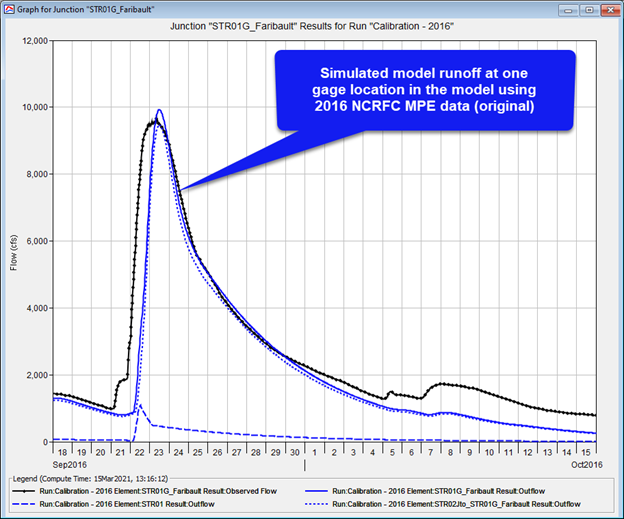