It is sometimes the case when modeling with gridded precipitation data that the data product that best captures the temporal distribution of rainfall does not best capture the cumulative volume of precipitation. The Normalizer Tool within HEC-HMS can be used to create a normalized precipitation grid that captures the temporal variability of one gridded dataset but the cumulative volume of another gridded dataset. For example, radar data collected at an hourly time step may adequately capture temporal variability over the simulation window, but a grid based on gage data collected at a daily time step may better capture the total volume of rainfall. For a detailed example showing how the Normalizer Tool computes the normalized grid, see the Normalizer User's Manual reference.

After unzipping the project files, open the Truckee River HEC-HMS model and navigate to the Results tab. Note there are five simulations that have already been computed. Each of the simulations span the entire 2017 water year (October 1, 2016 to September 30, 2017) and only differ by the gridded precipitation input. A description of each simulation is shown in the table below. 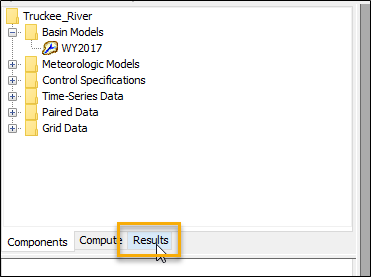 For each simulation in the model, select the subbasin element "UpTruckeeRv_s10."

While holding the CTRL key, select "Cumulative Precipitation" in the "UpTruckeeRv_S10" results tree for the "WY2017_MRMS_raw" and "WY2017_PRISM_raw" simulations. Then, select the plot icon on HEC-HMS toolbar. 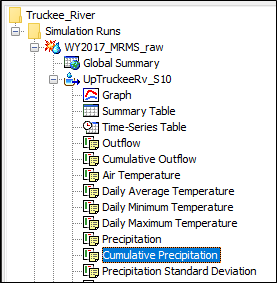 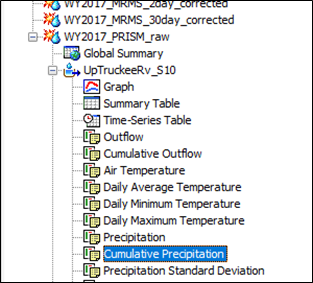 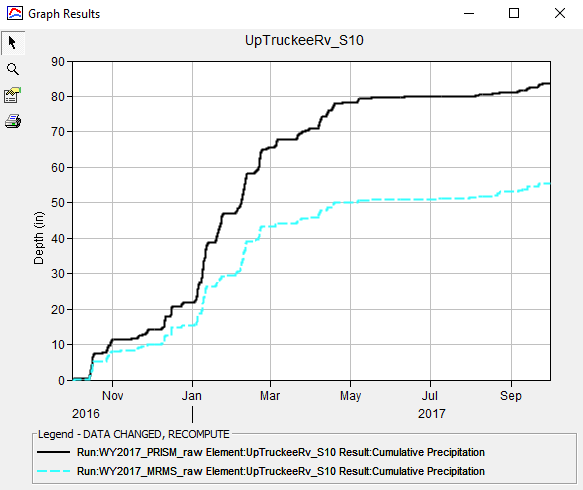 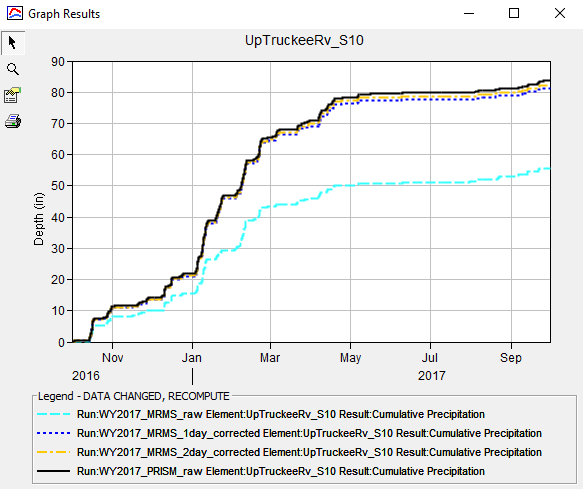 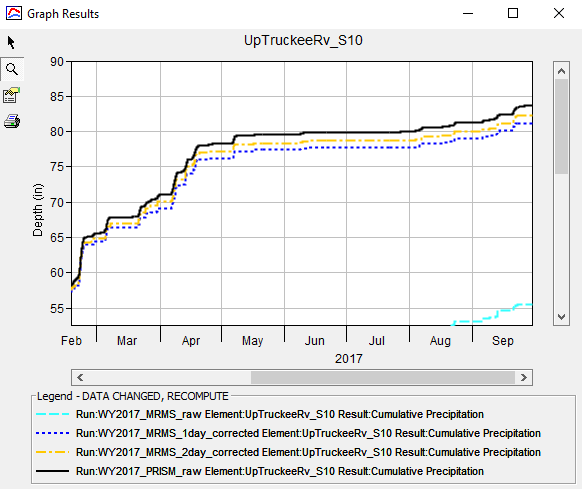 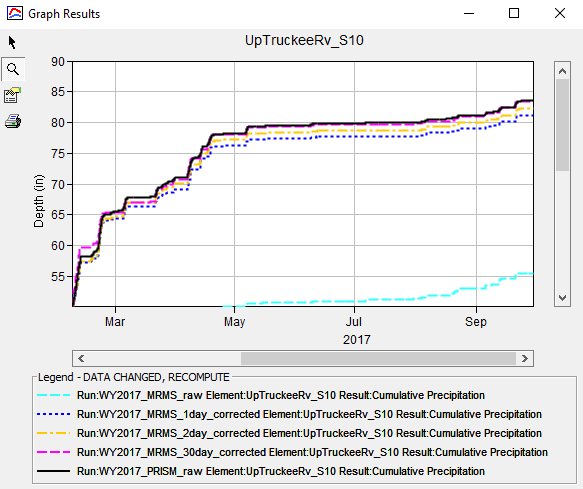 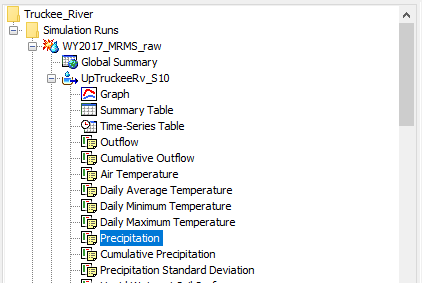 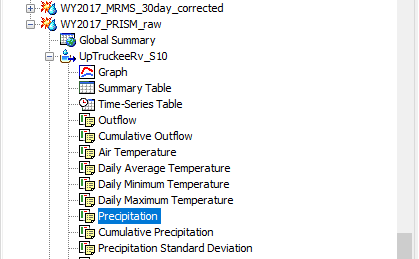 Using the magnifying glass tool on the resulting plot, zoom in to the January 1-6 storm event. Note the slight differences in timing between the MRMS data and the PRISM data. During the 05 Jan: 1200 – 06 Jan: 1200 interval, the PRISM data records a significant amount of precipitation, but the MRMS data records very little. If a Normalization Interval of 1 day was selected, the normalized grid may overestimate the amount of precipitation that fell during the 05 Jan: 1200 – 06 Jan: 1200 interval solely due to the difference in timing between the source and normal grids. However, if the user selected a Normalization Interval that encompassed the entire storm event, such as a 5-day interval, errors due to differences in timing between the source and normal grids could be minimized, since the volume from the entire storm event would be accounted for in the computation. 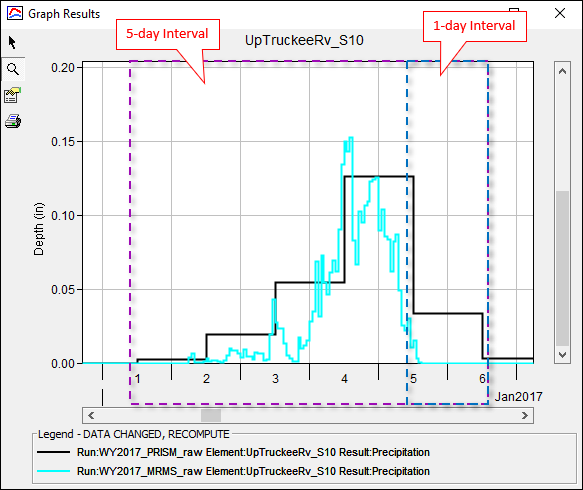 To view the error created by using a 1-day Normalization Interval, plot precipitation for the "UpTruckeeRv_S10" subbasin for the "WY2017_MRMS_raw," "WY2017_PRISM_raw," and "WY2017_MRMS_1day_corrected," simulations. Using the magnifying glass tool, zoom into the January 1-6 storm event. Note the unreasonably high precipitation value on January 5th. 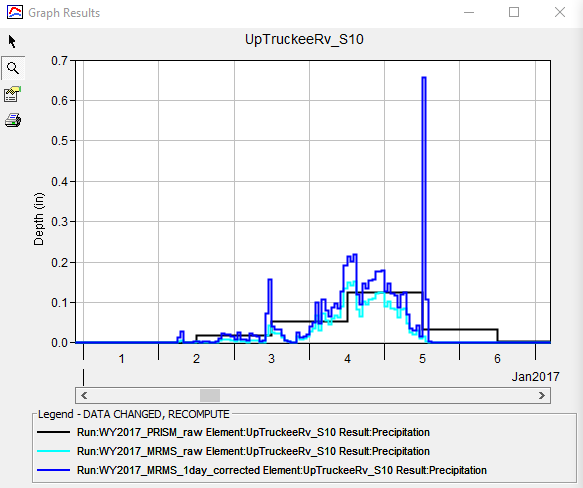 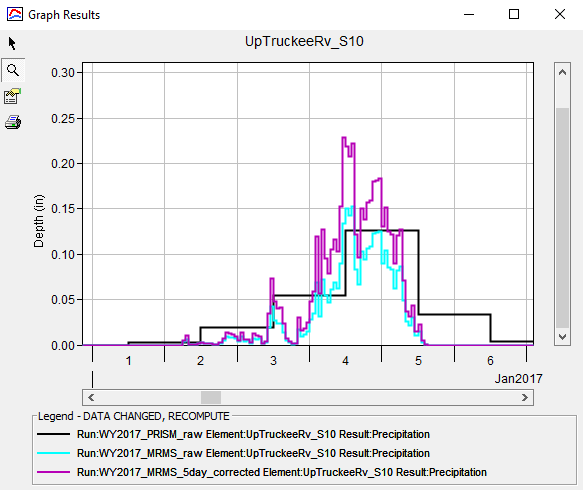 After gaining a thorough understanding of how the Normalization Interval affects the computation of the normalized grid, view the model results at several different junctions. All three simulations that used a normalized grid more closely replicated the cumulative observed flow at the "Truckee" HEC-HMS model junction when compared to the simulation that used the raw, uncorrected MRMS data. 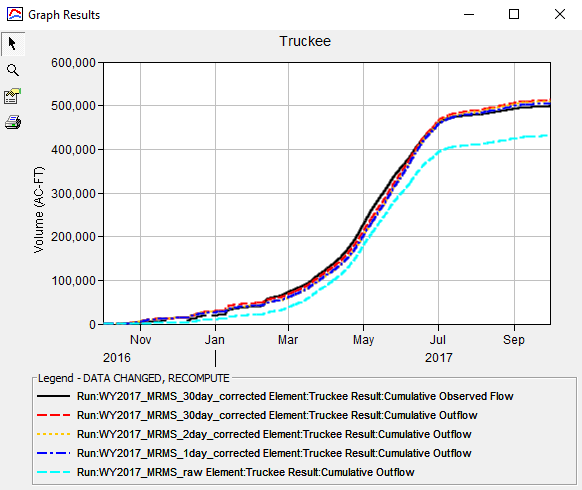 The image below shows how each simulation replicated observed discharge at the "Truckee" junction during the largest flood event in the simulation. While each normalized simulation offered an improvement over the raw, uncorrected MRMS simulation, the 30-day Normalization Interval resulted in the best fit to the 2017 flood peak. 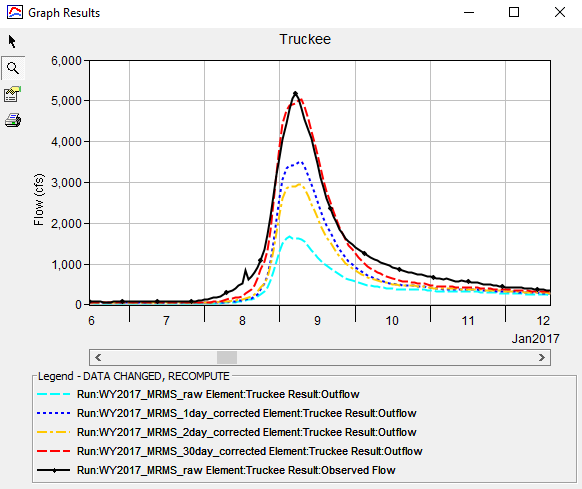