HEC-HMS includes an option to save select model states at a specific point in the simulation (by default, the states are saved at the end of the simulation). The saved states can be used to initialize a simulation. The start and save states options works with both simulation runs and forecast alternatives. The figure below shows the States tab within the Forecast Alternative Component Editor. In this example, the forecast alternative was configured to stop on April 1, 1997 at 00:00. 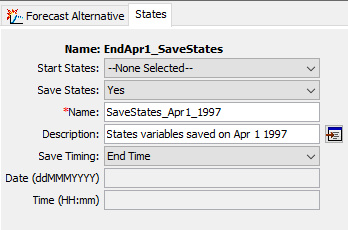 As of version 4.8, HEC-HMS will save the state variables for snowmelt, loss, transform, baseflow, and reach routing methods.  Additionally, the storage state in reservoir elements is saved as well. 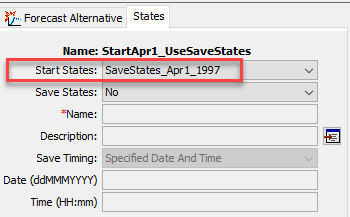 The start and save states option can be applied to both gridded and subbasin average methods. The program will save the state variables for each grid cell when using gridded modeling methods or for the subbasin when using subbasin average modeling methods. The figure below shows a small portion of a state file. The basin model used by the simulation that created this state file used gridded precipitation, gridded snowmelt, ModClark transform, and Deficit and Constant loss methods. Notice in the figure that snow, loss, and transform states are accounted for each grid cell.

Values in the state file are in metric units. 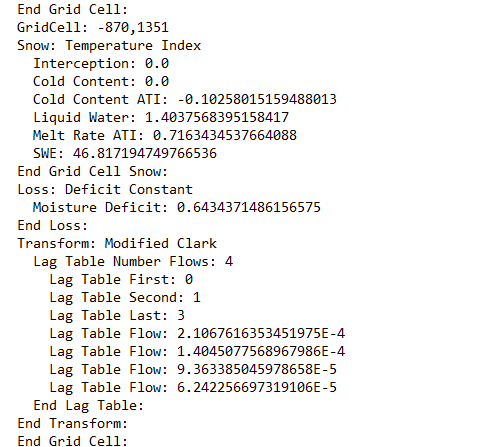 Many modeling applications include scenarios when the simulation of interest begins with a snowpack already on the ground. The purpose of the simulation might be to model snowmelt or rain-on-snow scenarios. It is often easier to find precipitation and temperature data than it is to find data to initialize the five temperature index state variables. For example, consider a scenario where a model will be used to simulation snowmelt, precipitation, and runoff starting on April 1, 1997. A preliminary simulation could be configured that starts on October 1, 1996, when there is no snowpack, and end on April 1, 1997. The temperature index state variables could be saved at the end of the preliminary simulation and used to initialize the simulation (including different meteorologic and basin models) starting on April 1, 1997.

Application of start and save states is straightforward for simulation runs. The states in a saved states file will replace all initial conditions in the meteorologic and basin models within a regular simulation. However, a forecast alternative contains many options for modifying initial conditions and parameters in the meteorologic and basin models. These tools include zonal editors, parameter override editors, slider bar editors, and initialization editors. As such, the application of start and save states within forecast alternatives is more complicated. The states from the saved states file will overwrite information in the basin model, zonal editor, parameter override editor, and slider bar editors. The initialization editors, initial baseflow, initial reservoir stage, and initial reach flow will overwrite information from the saved states file.

Example Application of Save and Start States

The following steps show how to use the save and start states options to initialize the temperature index snow model (the same approach works with simulation runs as well). The save and start states options can be used to initialize loss, transform, baseflow, routing, and reservoir state variables as well. HEC-HMS 4.8 was used to create this tutorial.

A copy of the example project last run in version 4.10 beta 5 can be downloaded from here  - MainstemColumbia_states-4.10beta5.zip

The watershed used in this example is part of the Columbia River Watershed. Major tributaries include the John Day, Umatilla, and Klickitat Rivers. Snow accumulation and melt are major drivers of the runoff response in this modeling domain. The scenario presented in the tutorial is one where the modeler was given the task of simulating snow accumulation, melt, and runoff for the period April 1, 1997 through June 1, 1997. Gridded precipitation and temperature data were available from October 2, 1996 through September 30, 1997.

There is some additional flexibility that is worth mentioning. Save states files can be paired with different basin models. The program will only use the saved states for those subbasin elements that have matching names. If the program cannot find a subbasin element in the save states file, then it will use the initial condition values defined in the meteorologic and basin models or the forecast alternative editors.