In this tutorial you will apply the HEC-HMS linear reservoir baseflow method to a modeling application. Initial parameter estimates will be determined, and the model will be calibrated through trial and error.

1) Why should the linear reservoir groundwater coefficients be related to the Clark storage coefficient.

It is not necessary to link the linear reservoir groundwater coefficients to the Clark storage coefficient. However, similar processes that impact storage, attenuation, and timing of surface water impacts the response of interflow and baseflow. Interflow and baseflow happen throughout the watershed. Infiltrated water moves through the soil and then exfiltrates into a small channel. Once in the channel network, water flows in the stream network to the subbasin outlet. The path water takes after it exfiltrates into a channel is similar to the path direct runoff takes. The difference is that groundwater flow / baseflow spends a portion of the travel time in the soil, which is accounted for by increasing the baseflow coefficient or adding multiple linear reservoirs (steps). Another reason to ratio unit hydrograph and baseflow storage coefficients is to reduce the complexity of parameterizing a basin model with many subbasins. Using ratios is a quick way to parameterize a model while linking parameters that are conceptually similar.

2) What were your final loss and groundwater parameters? What was the Nash-Sutcliffe score for the calibrated model?

The final Constant Loss Rate was set to 0.07 in/hr. The following figure shows the final Linear Reservoir Baseflow parameters. The Nash-Sutcliffe score was 0.932. 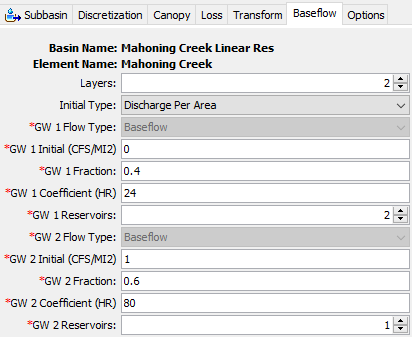 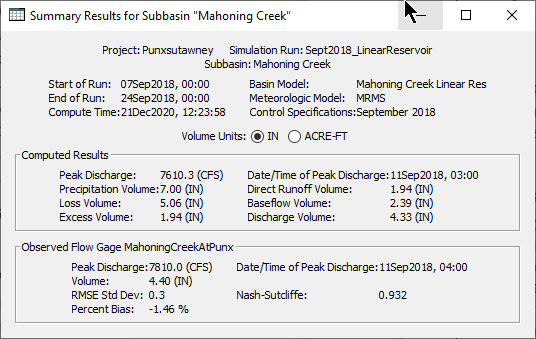