HEC-HMS 4.7 beta 2 was used to create this tutorial.

The HEC-HMS team added an option to the Clark unit hydrograph method that allows modelers to vary the time of concentration and storage coefficient parameters based on excess precipitation intensity. Developing the relationship between time of concentration and storage coefficient parameters and excess precipitation can be challenging. Historical storm events could be used if there were several storm events with varying precipitation intensities. Another option is to use numerical models, like the 2D Diffusion Wave transform method, that includes the physics of overland flow and would be able to model the non-linear change in runoff response as precipitation rates increase.

This tutorial shows how to use the new 2D Diffusion Wave model in HEC-HMS (the same code in HEC-RAS), to create the variable parameter relationships for the Clark unit hydrograph method. The variable Clark method has application for studies where many, many simulations will be computed with moderate to extreme precipitation rates to evaluate uncertainty and parameter sensitivity on a watershed's runoff response. It might not be possible to run many events through the 2D Diffusion Wave transform solution in an uncertainty analysis. The variable Clark option can capture the non-linearity in runoff response while computing in a fraction of the time.

The area modeled in this tutorial is part of the Coyote Creek watershed in Northern California. See the following tutorial for information about the watershed and how the HEC-HMS model was developed - Comparing HEC-HMS Discretization and Transform Options. In summary, an HEC-HMS model was developed for part of the Coyote Creek watershed, the upper 109 square miles. Observed precipitation and flow data were used to calibrate the model. The subbasin element was configured to use the Deficit and Constant loss method, 2D Diffusion Wave transform method, and the Linear Reservoir baseflow method. The 2D unstructured mesh had 18,512 grid cells. As described below, the 2D model was used to create variable Clark parameter relationships.

A model must be calibrated to observations in order to be used for future prediction. This is true for models that include the physics of the natural processes as well as conceptual and empirical models. When developing the Coyote Creek HEC-HMS 2D model, the infiltration, transform, and baseflow parameters were adjusted, within reason, to improve the performance of the model to the 1982 event. The following figure shows results from the December 22, 1982 flood event. The Nash-Sutcliffe metric was 0.89 and the percent bias in runoff volume error was 3.8 percent. Timing of the runoff hydrograph was improved by adjusting the surface roughness parameters while magnitude of peak flow and volume of the runoff hydrograph were improved by adjusting loss and baseflow parameters. 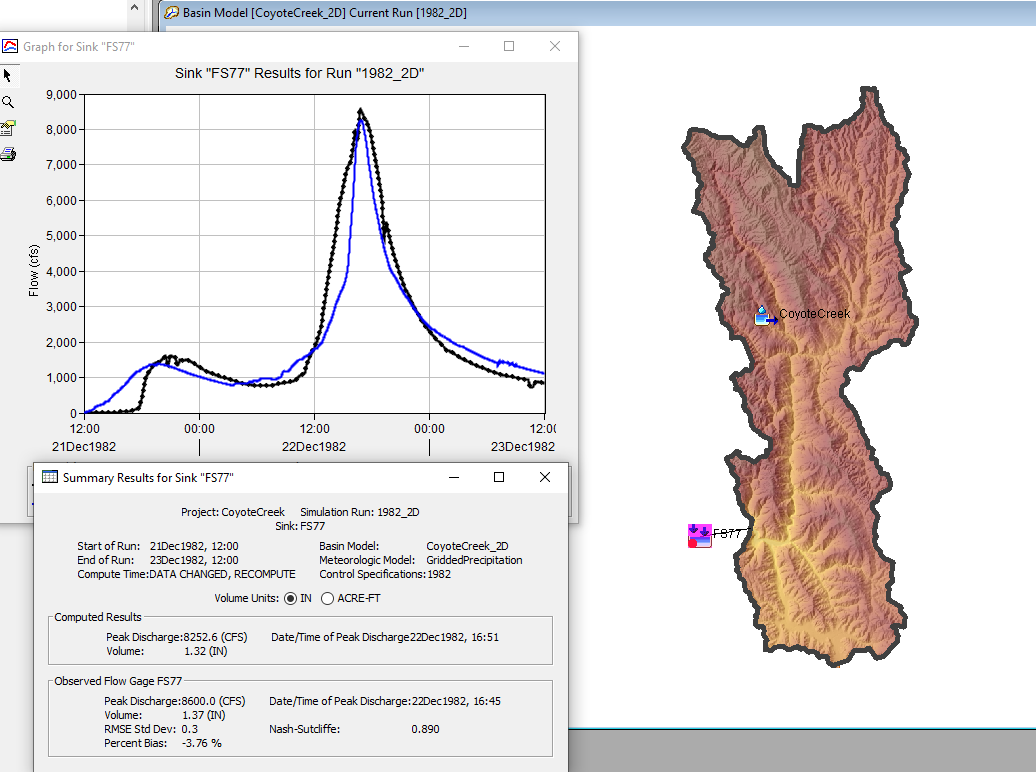 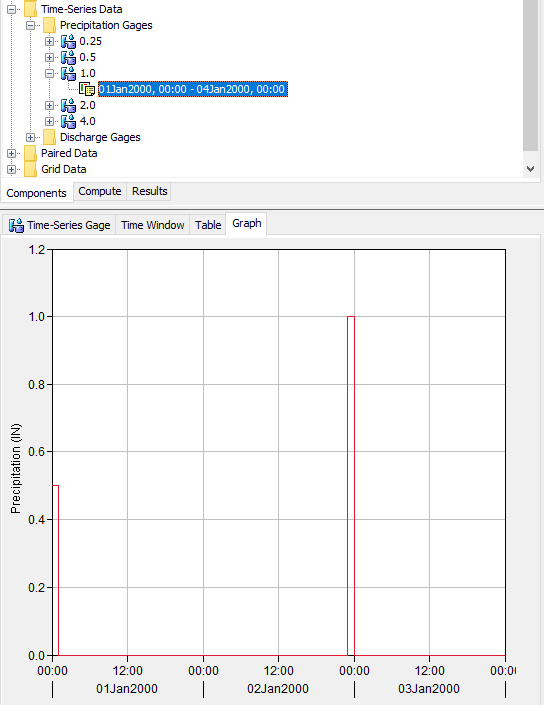 The following figure shows results from the simulation where the main precipitation was 1 inch/hour. Notice the precipitation depth is a little larger than 0.016 inches in the plot. The simulation time-step was 1 minute, 1 inch/hour divided by 60 minutes is 0.0167 inches. The meteorologic model applied 0.0167 inches per minute for a 1-hour period. The resulting hydrograph is the runoff response from 1 inch of precipitation applied to the subbasin element. The subbasin element only had the 2D Diffusion Wave transform option turned on, so only surface routing computations were performed during the simulation. 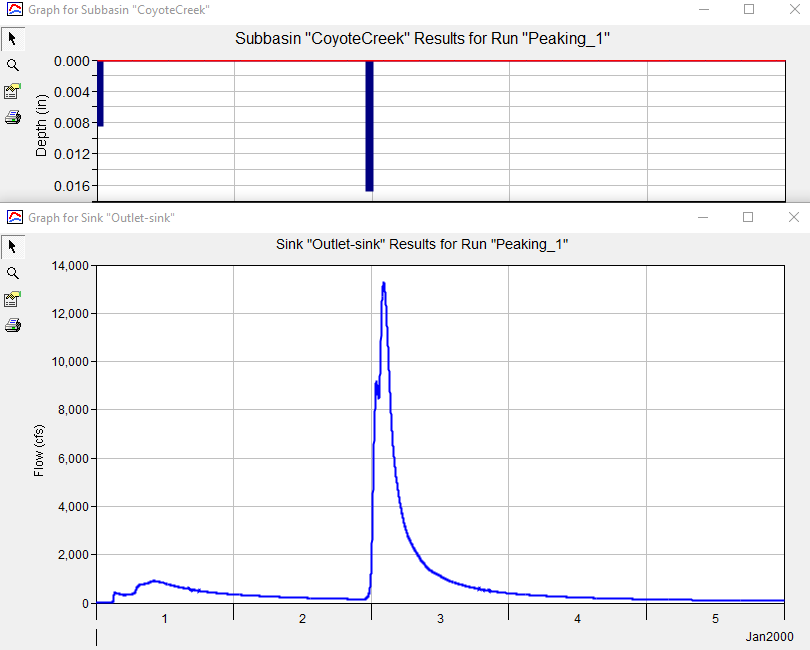 The following figure shows a comparison of the runoff hydrograph from three of the hypothetical simulations. The hydrographs do not represent unit hydrographs since they have not been normalized to one inch of precipitation. Notice how the time of the peak flow shifts as the precipitation intensity increases. 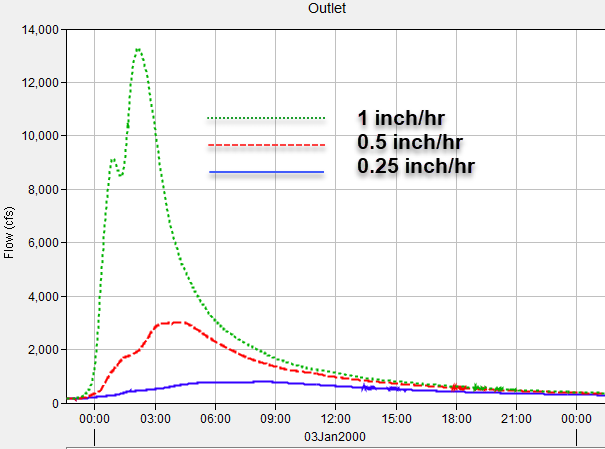 Step 3: Calibrate the Clark Model to the 2D Model Results 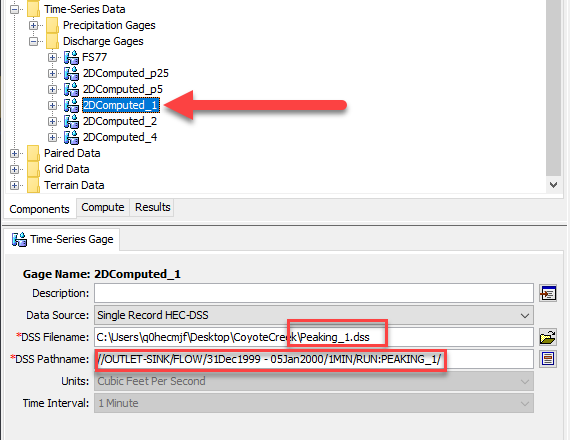 The CoyoteCreek_2D_peaking basin model was copied, and the transform method was changed from 2D Diffusion Wave to Clark Unit Hydrograph. Four additional copies were created. Five copies were needed in order to identify a separate set of Clark parameter for each of the hypothetical precipitation simulations in step 2. Five simulations were created as well that combined the Clark unit hydrograph basin models and the hypothetical meteorologic models. The following table shows the basin model, meteorologic model, and simulation run names for the Clark unit hydrograph simulations. 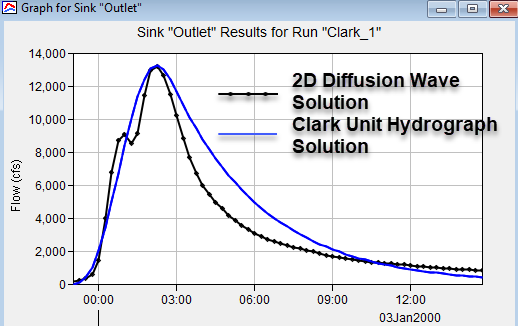 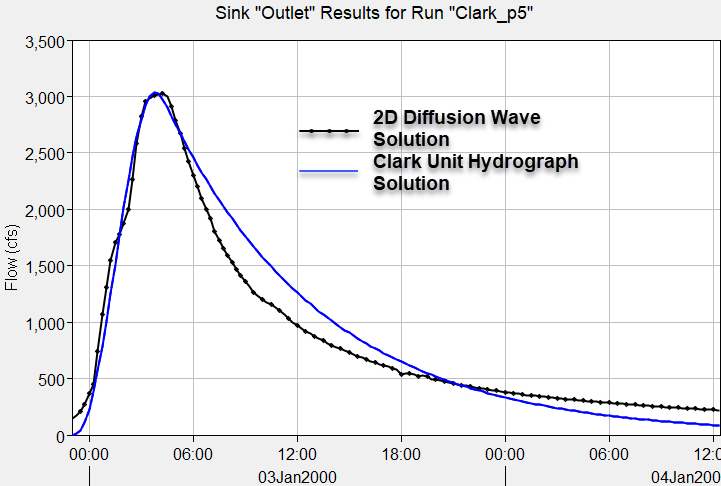 The following table contains results from the five Clark unit hydrograph simulations. Notice how the time of concentration and storage coefficient values decrease as the precipitation intensity increases. 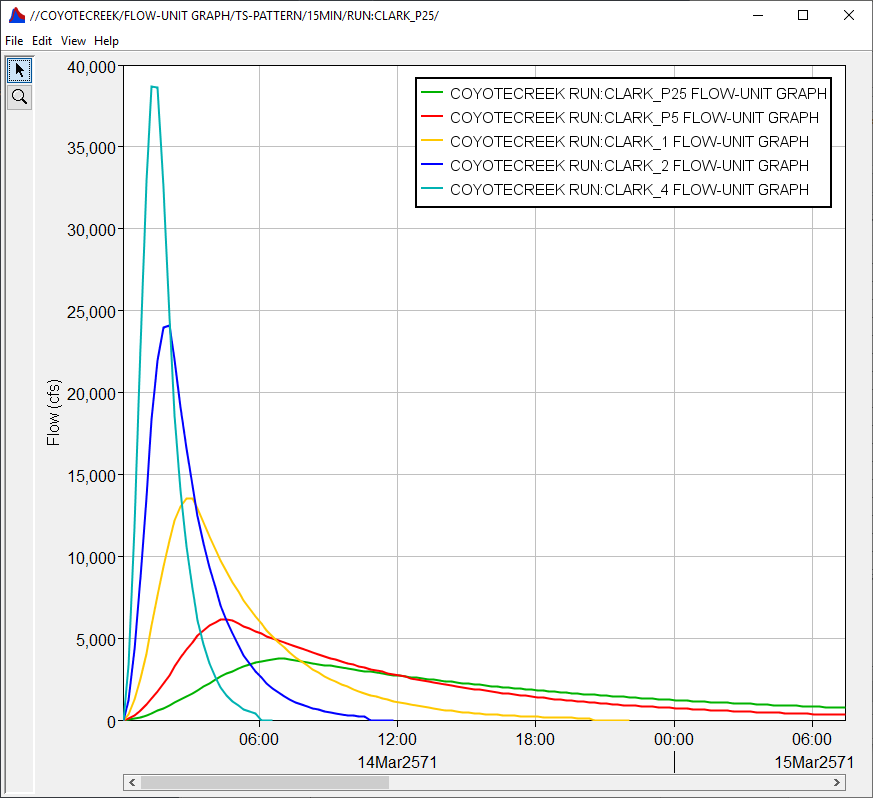 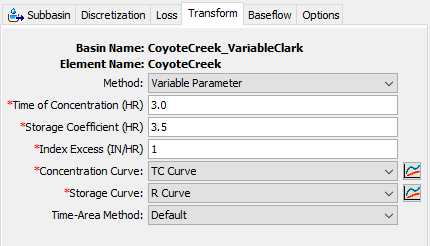 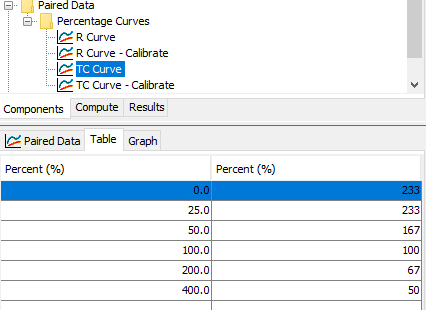 To test the variable Clark parameters, the CoyoteCreek_2D basin model was copied and the copy was named CoyoteCreek_VariableClark. The transform method was changed to Clark Unit Hydrograph and the Variable Parameter option was selected within the subbasin Component Editor. As shown above, an index excess precipitation rate of 1 inch/hour was entered and so were the Time of Concentration, 3 hours, and Storage Coefficient, 3.5 hours, that were determined when calibrating the Clark model to the 2D results for a precipitation rate of 1 inch/hour. The Concentration and Storage curves created above were selected as well.

A simulation named 1982_VariableClark was created that combined the CoyoteCreek_VariableClark basin model, the GriddedPrecipitation meteorologic model, and the 1982 control specifications. Results from the simulation are shown below, the computed hydrograph does not match the magnitude and shape of the observed runoff hydrograph. 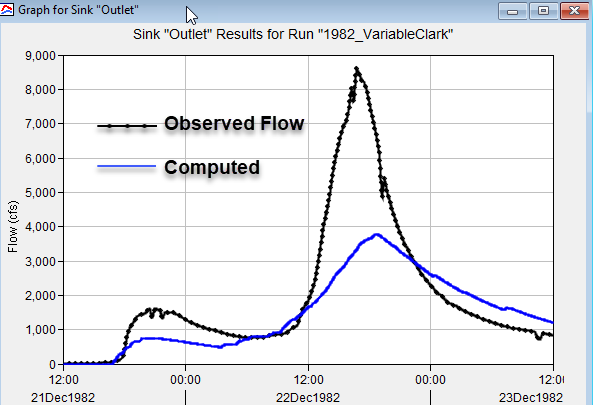 Why does the computed hydrograph not match the observed hydrograph? A calibrated 2D Diffusion Wave transform method was used to develop relationships between excess precipitation and the Clark time of concentration and storage coefficient parameters. However, the approach used does not mimic the variable nature of precipitation from natural flood events, like the event being modeled on December 22, 1982. The figure below shows the basin average precipitation for the December 22, 1982 event. The precipitation rate does not approach the 1 inch/hour rate, but there are six consecutive hours where the precipitation rate exceeds 0.2 inch/hour. During this extended period of precipitation, rainfall is falling onto a wet watershed. There is water flowing across the land surface in streams as precipitation is fall. This natural event is not the same as the hypothetical events used to derive the variable parameters; the event and results remind us that the time-invariance assumption used with the application of unit hydrographs has limitation. The main point here is that a unit of precipitation falling onto a watershed will respond differently with different antecedent conditions.

The variable time of concentration and storage coefficient percentage curves were adjusted to improve the model results for the 1982 event. In addition, the constant loss rate was reduced from 0.25 inches/hour from the 2D simulation to 0.16 inches/hour for the variable Clark simulation. The following table shows the updated concentration and storage curves.

The approach and tools in this example provide a method for using unit hydrographs for a range of flood events. The most useful application for the variable Clark unit hydrograph method could be for extreme events (for those synthetic flood events that are larger than typical calibration data). The linearity assumption with unit hydrographs often leads modelers to arbitrarily adjust unit hydrograph parameters when applying models for simulating extreme floods. In the Coyote Creek example, the 2D Diffusion Wave simulations show the time of concentration decreases from 4.5 hours for an excess precipitation rate of 0.5 inch/hour to 2 hours for a excess precipitation rate of 2 inches/hour. The storage coefficient has a much more dramatic reduction (from 9 hours to 1.75 hours), which translates to a much faster responding hydrograph at higher precipitation rates. The information gathered from the 2D Diffusion Wave simulation can be used to inform the variable Clark unit hydrograph model which could then be used to quickly model the subbasin response to extreme events. 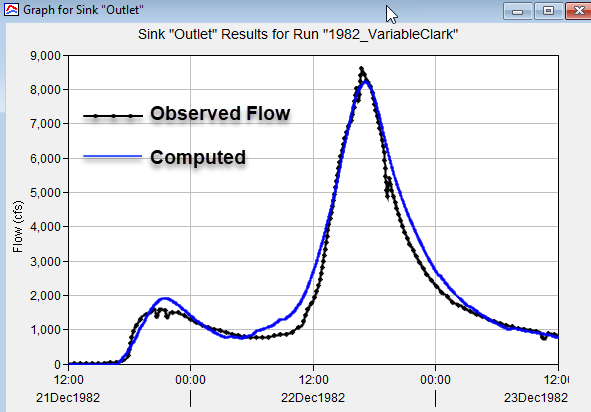