In this tutorial you will apply the HEC-HMS Initial and Constant loss method to a modeling application. Initial parameter estimates will be estimated using GIS information and the model will be calibrated through trial and error.

The Initial and Constant loss method uses a hypothetical single soil layer to account for changes in moisture content.  While this method is very simple, it is widely used to model watersheds that lack detailed subsurface information.  Since no means for extracting infiltrated water is included, this method should only be used for event simulation.  The underlying concept of the initial and constant loss method is that the maximum potential rate of precipitation loss, fc, is constant and unchanging during a simulation.  Thus, if the precipitation rate, pt, is less than fc, no runoff will occur.  An initial loss, Ia, can be specified to represent the volume of precipitation that is expected to be lost prior to the onset of runoff initiation.  Until the accumulated precipitation volume, pi, exceeds Ia, no runoff will occur.  After Ia has been satisfied, runoff will only occur if and when pt is in excess of fc.  Parameters that are required to utilize this method within HEC-HMS include the Initial Loss [inches or millimeters] and Constant Rate [in/hr or mm/hr].  The Directly Connected Impervious Area [percent] is an optional parameter and can be specified by the user.

A Note on Parameter Estimation

The values presented in this tutorial are meant as initial estimates.  This is the same for all sources of similar data including Engineer Manual 1110-2-1417 Flood-Runoff Analysis and the HEC-HMS Technical Reference Manual.  Regardless of the source, these initial estimates must be calibrated and validated.

The initial loss defines the volume of water that is required to fill the soil layer at the start of the simulation.  This parameter is typically defined using the product of the soil moisture state at the start of the simulation and an assumed active layer depth, but it should be calibrated using observed data.  In order to estimate an appropriate initial loss, the antecedent conditions at the beginning of September 2018 must be investigated.  Daily average humidity, daily precipitation accumulation, daily average temperature, and daily average wind speed are shown in Figure 1. 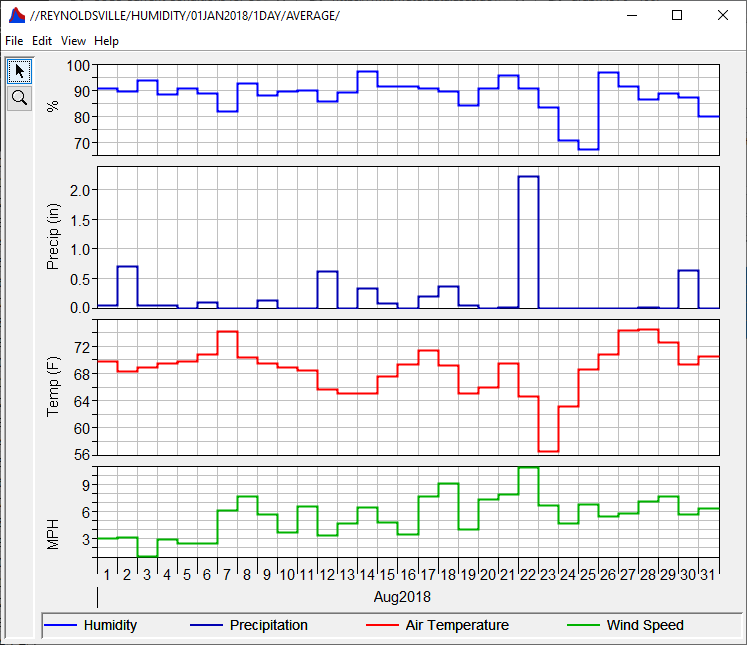 Use Figure 1 and the following information to answer Question 1.  Assume that the soil within the study area:

Question 1: Estimate an initial loss (in inches) for the study area at the beginning of September 2018.

A reasonable initial loss is approximately 2 inches.  However, this parameter must be calibrated using observed data.

The constant rate defines the rate at which precipitation will be infiltrated into the soil layer after the initial loss volume has been satisfied.  Typically, this parameter is equated with the saturated hydraulic conductivity of the soil which is defined as the rate at which water moves through a unit area of saturated soil in a unit time under a unit hydraulic gradient.  To estimate saturated hydraulic conductivity throughout the study area, Gridded Soil Survey Geographic (gSSURGO) data for Pennsylvania was obtained from the U.S. Department of Agriculture's Geospatial Data Gateway.  Using GIS tools, surficial soil textures were then extracted from the gSSURGO data and are shown in Figure 2.  Also, the percent of the study area encompassed by each soil texture is shown in Table 1.

A tutorial describing how gSSURGO data can be obtained and formatted for use within HEC-HMS can be found here. 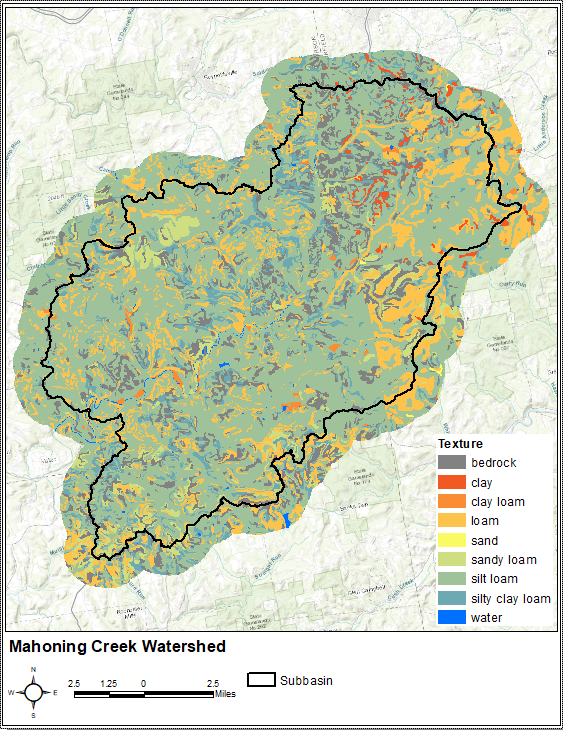 These surficial soil textures can be used to estimate initial parameter values for nearly all loss methods within HEC-HMS, including the Initial and Constant loss method.  For instance, Rawls, Brakensiek, and Miller (1983) assembled data from thousands of soil samples located throughout the United States and related soil textures to various parameters that are useful within hydrologic modeling.  The saturated hydraulic conductivity of various soil textures is shown in Table 2.

Use Figure 2, Table 1, and Table 2 to answer the following questions.

Question 2: What are the top five predominant soil textures throughout the study area?

Next, use Table 2 to answer the following question.  Also, (conservatively) assume that bedrock has a saturated hydraulic conductivity of 0 in/hr.

Question 3: What is the saturated hydraulic conductivity for the top five predominant soil textures found when answering Question 2?

Finally, estimate an average (i.e. representative) saturated hydraulic conductivity for the study area using your answers to the previous two questions.  Don't spend too much time being overly precise; instead, quickly estimate the percentage of the study area that is encompassed by each predominant soil texture and multiply by the corresponding saturated hydraulic conductivity.  Once you've done that for each of the five predominant soil textures, sum the values.

Question 4: What is an average (i.e. representative) saturated hydraulic conductivity for the study area?

Calibrating a model to afford better agreement between computed and observed runoff oftentimes requires simultaneous changes to more than just one process (e.g. calibrate both loss and baseflow at the same time).  However, within this tutorial, only the Initial and Constant loss method parameters will be modified.

Question 5. What were the final Initial and Constant loss method parameters and corresponding RMSE Std Dev, Percent Bias, and Nash-Sutcliffe statistical metrics for the calibrated model?

Using an initial loss of 1.8 inches and a constant loss rate of 0.04 in/hr offers an RMSE Std Dev, Percent Bias, and Nash-Sutcliffe statistical metrics of 0.4, 12.32%, and 0.818, respectively, as shown in Figure 9.  However, these are by no means the only parameter combinations that can result in acceptable model calibration. 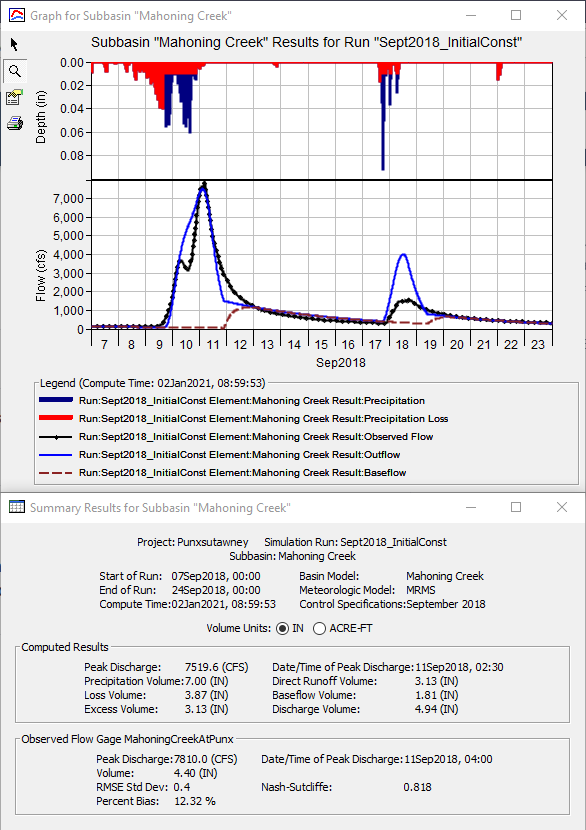 The Initial and Constant loss method does not include a way for infiltrated water to be extracted through evapotranspiration.  In fact, a warning message is written to the messages panel:

WARNING 45231:  Transpiration is not computed for Initial and Constant loss method in subbasin "Mahoning Creek".

If this is important to the specific application at hand, another loss method (e.g. Layered Green and Ampt, Deficit and Constant, Soil Moisture Accounting, etc) should be used that can simulate these processes.

Continue to Applying the Green and Ampt Loss Method