In this tutorial you will apply the HEC-HMS Lag routing method to a modeling application.  Initial parameter estimates will be estimated using GIS and observed information and the model will be calibrated through trial and error.

The lag routing method is the most simplistic hydrologic routing method available for use within HEC-HMS.  This method can only represent the translation of flood waves and does not include any representation of attenuation or diffusion processes.  Inflow to the reach is delayed in time by a user-specified amount of time.  Consequently, it is best suited to short stream segments with a predicable travel time that doesn't vary with changing conditions.  Parameters that are required to utilize this method within HEC-HMS include the initial conditions and lag time [minutes].

Lag time is the amount of time (i.e. travel time) that the inflow hydrograph will be translated as it moves through the reach.  This parameter can be estimated in multiple ways including: 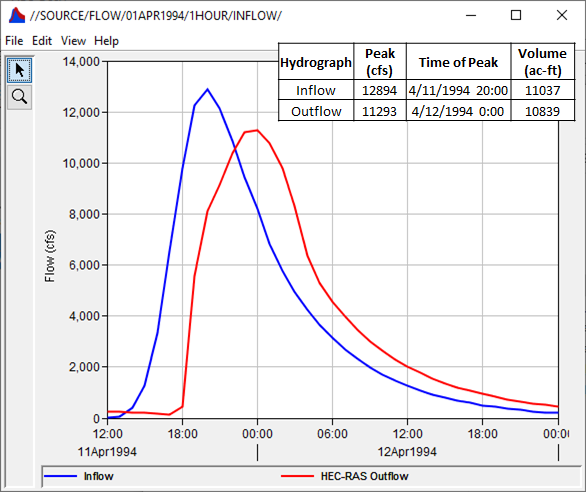 Use Figure 1 to answer the following questions.

Question 1: Use the time of peak for both hydrographs shown in Figure 1 to estimate a representative travel time (in hours) for this event.

Question 2: Use the approximate centroid of the area beneath each hydrograph to estimate a representative travel time (in hours) for this event.

Question 3: For a reference flow of 6500 cfs on the rising limb, estimate a representative travel time (in hours) for this event.

The travel time, T, of a flood wave moving through a reach can also be estimated by dividing the length of the reach, L, by the flood wave velocity, Vw:

To estimate a flood wave velocity, multiple approaches can be used including:

This tutorial will make use of the Kleitz-Seddon Law which can be written as:

where B = the top width of the water surface and \frac{d Q}{d y} = slope of the flow-stage rating curve; both of these variables must be estimated for the flow rate in question and at a cross section that is representative of the routing reach.  The USGS maintains a flow-stage rating curve for the stream gage at Punxsutawney and is shown in Figure 2. 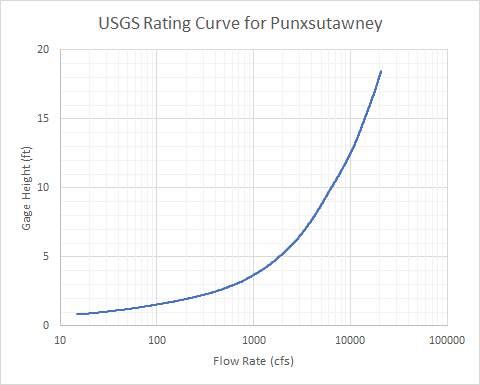 Question 4: For a reference flow of 6500 cfs, estimate a representative flood wave velocity (in ft / s) using the Kleitz-Seddon Law.

Question 6: Do you think a single, representative travel time can be estimated for both large and small flood events?  Do you have any reservations about the use of a single value to represent the travel time through a reach?

Estimating a single, representative travel time for flood events large and small is difficult (if not impossible) in real world streams.  In general, the speed at which a flood wave moves depends upon the depth of flow.  For instance, within most stream systems, larger floods (with greater depths) propagate faster than smaller floods (which have shallower depths).  Also, the speed at which a flood wave moves through a reach depends upon the geometry of the stream in question.  Top width, flow area, effective roughness, and even the flow length (due to increasing/decreasing sinuosity) of a stream can change with the magnitude of an event.  As such, the travel time through a reach depends upon the event and reach in question.  Channel routing parameters, like travel time, must be calibrated and validated based upon the model's intended use.

Calibrating a model to afford better agreement between computed and observed runoff oftentimes requires simultaneous changes to more than just one process (e.g. calibrate both transform and routing reach parameters at the same time).  However, within this tutorial, only the Lag routing method parameters will be modified.

Question 7. What were the final Lag routing parameters and corresponding computed discharge peak flow rate, time of peak, and volume (in ac-ft) for the calibrated model?  How do these values compare to the corresponding observed discharge values?

Using a lag time of 165 minutes results in a difference of approximately 1600 cfs, 75 minutes, and 141 ac-ft when comparing the peak flow rate, time of peak, and volume of the computed and observed discharge hydrographs, respectively.  Also, these parameters result in an RMSE Std Dev, Percent Bias, and Nash-Sutcliffe statistical metrics of 0.2, 1.26%, and 0.974, respectively, as shown in Figure 5.  However, these are by no means the only parameter combinations that can result in acceptable model calibration. 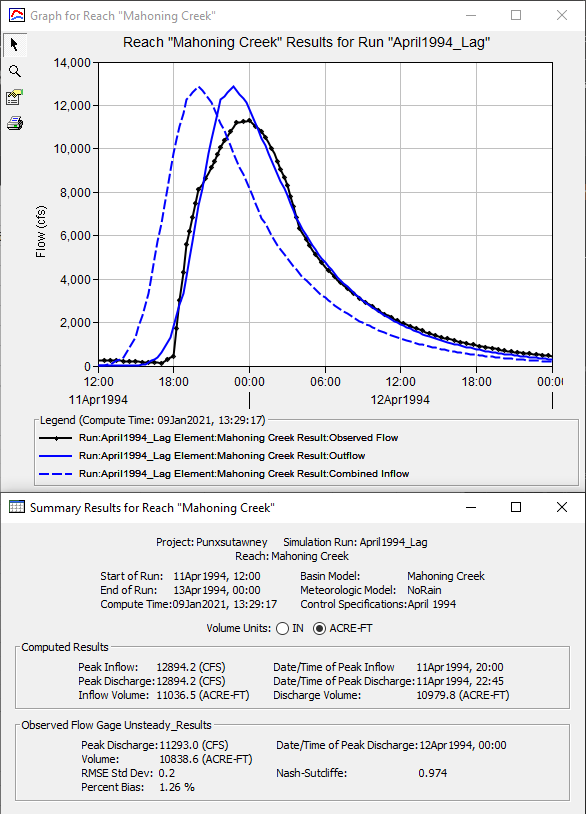 Question 8. Is it possible to reduce the computed discharge hydrograph peak flow rate when using the Lag routing reach method?  If not, why?

No.  When using the Lag routing reach method, only translation processes are simulated.  No attenuation or diffusion of the inflow hydrograph will be simulated.