The new 2D Diffusion Wave transform method within HEC-HMS version 4.7 explicitly routes excess precipitation throughout a subbasin element using a combination of the continuity and momentum equations.  As such, this new transform method can be used to simulate the non-linear movement of water throughout a subbasin when exposed to large amounts of excess precipitation.  A tutorial detailing this use case is contained here: Creating a Simple 2D Flow Model within HEC-HMS.

This example uses the Truckee River watershed which originates at the outlet of Lake Tahoe in California.  The Truckee River flows for over 100 miles and eventually empties into Pyramid Lake in Nevada.  Major population centers within the Truckee River watershed include the cities of Truckee, CA, Reno, and Sparks, NV with a total population greater than 350,000 (as counted during the 2010 census).  Numerous state and federal water supply and flood risk management projects have been constructed within this watershed.  Several major federally-constructed projects include Martis Creek Dam, Prosser Creek Dam, Stampede Dam, and Boca Dam, as shown in Figure 1. 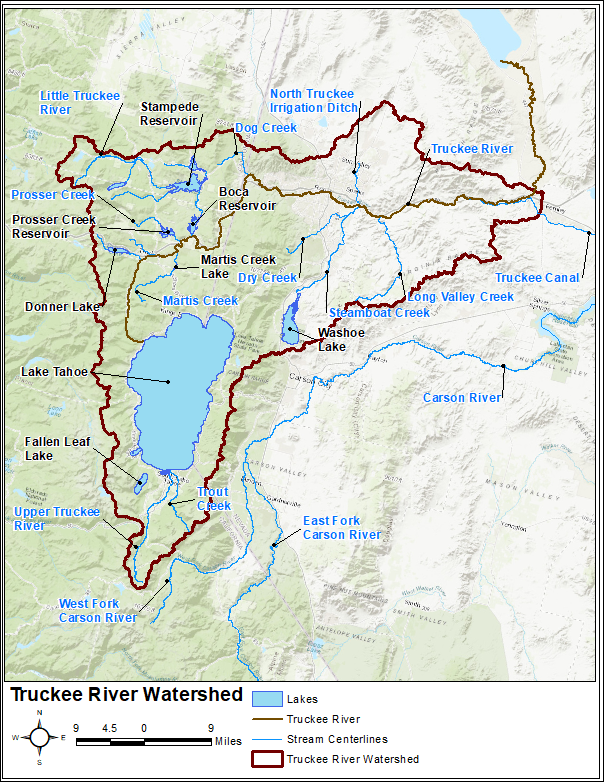 The Truckee River upstream of the United States Geological Survey (USGS) gage at Reno, NV (10348000; https://waterdata.usgs.gov/nv/nwis/inventory/?site_no=10348000&agency_cd=USGS) drains over 1000 sq mi of rugged terrain within the Sierra Nevada mountains.  Upstream of this gage, numerous peaks in excess of 10,000 ft are present along with extremely steep channels (slopes > 50 ft/mi) and incised canyons.  However, in the vicinity of Reno and Sparks, NV, channel slopes reduce to nearly 1 ft/mi and a floodplain several miles wide forms.  Additionally, the Truckee River receives two tributaries: 1) Steamboat Creek from the south and 2) North Truckee Ditch from the north.  Downstream of the USGS gage at Vista, NV (10350000; https://waterdata.usgs.gov/nwis/uv?site_no=10350000), the floodplain contracts and the Truckee River enters another steep canyon, as shown in Figure 2. 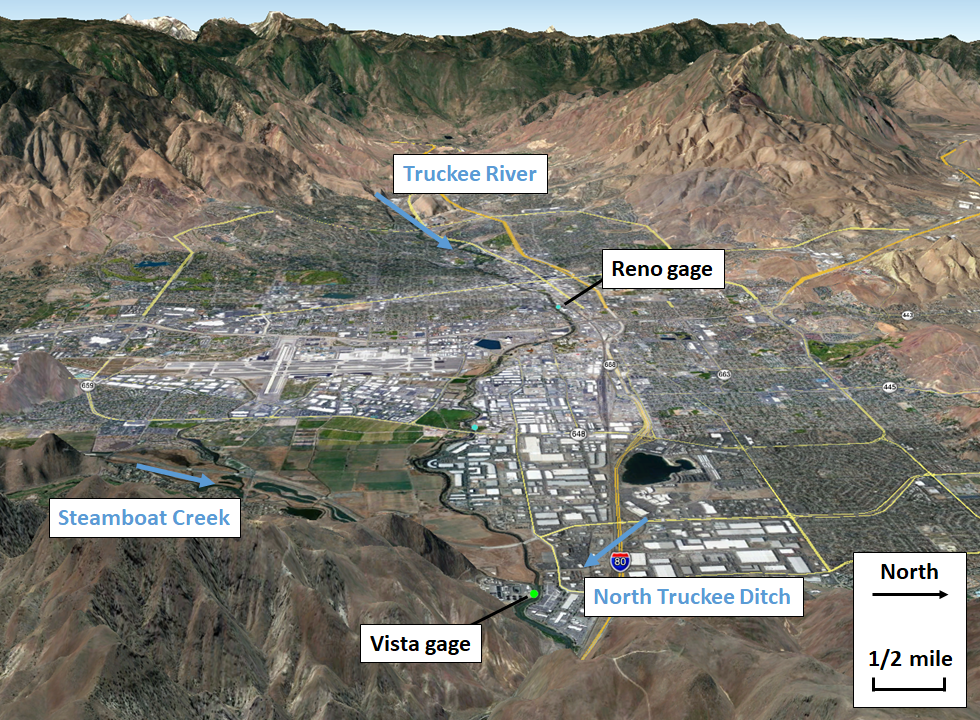 While the Truckee River provides a major source of water for its nearby inhabitants, the river is also prone to significant flooding.  Substantial damage to urban areas has occurred during large scale and widespread rain-on-snow flood events in January 1997, December 2005 - January 2006, and January - February 2017 (amongst others).  The extent of flooding during January 1997 within downtown Reno and at the Reno-Tahoe Airport are shown in Figures 3 and 4, respectively. 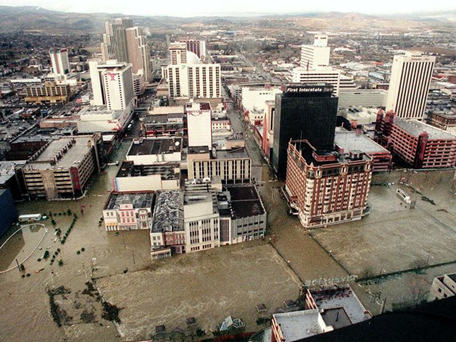 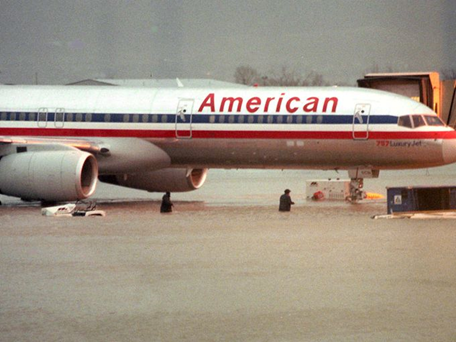 An HEC-HMS was used to simulate the precipitation-runoff processes throughout the Truckee River watershed.  This model, which was originally built as part of a Corps Water Management System (CWMS) implementation, was modified to route excess precipitation with the Modified Clark unit hydrograph method and route streamflow using both the Muskingum-Cunge and Modified Puls channel routing methods.  This model is detailed here: Modeling Rain-on-Snow Events.

The January 1997 flood event (spanning from late December 1996 through early January 1997) was simulated with this model.  The results upstream of the Reno gage were found to adequately reproduce observed streamflow, reservoir inflow/outflow/pool elevation, and snow data, as shown in Figure 5.  However, computed streamflow was found to deviate from observed streamflow at the Vista gage, as shown in Figure 6.  Specifically, computed streamflow at the Vista gage arrived earlier and was more peaked than the observed data suggested. 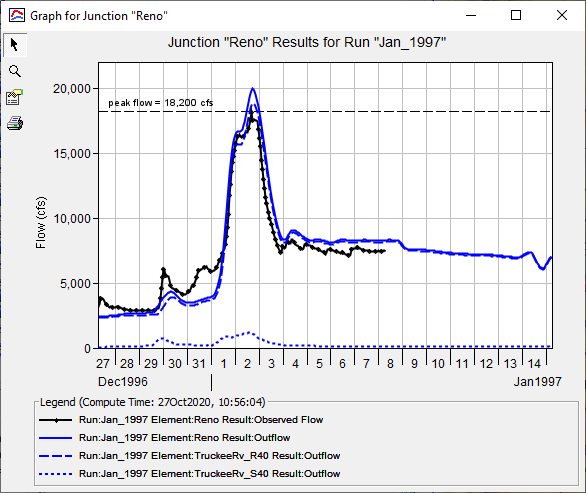 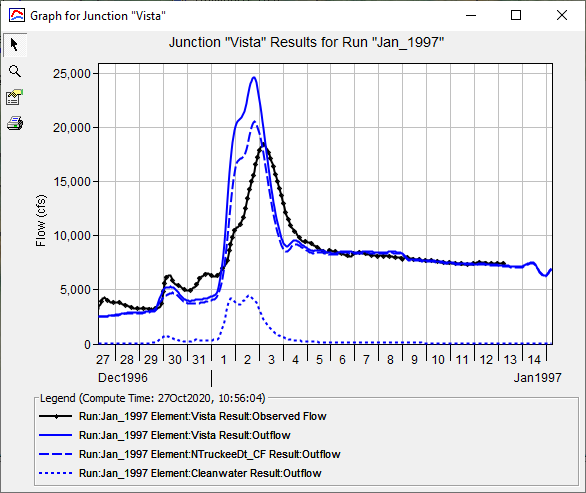 These inaccuracies are due to: 1) the complex hydraulic interactions in and around the cities of Reno and Sparks, NV and 2) the hydrologic routing simplifications within the existing HEC-HMS model.  During this flood (and other large floods), streamflow exceeded the channel capacity of the Truckee River and Steamboat Creek and began to spread throughout the very wide floodplain.  Also, the large amount of runoff was constricted by the natural topography downstream of the Vista gage.  These complex hydraulic scenarios cannot be accurately simulated using hydrologic routing.  To more accurately route water within the area of interest in and around the cities of Reno and Sparks, NV during large floods, the existing HEC-HMS model was modified to use the new 2D Diffusion Wave transform.  The following sections detail the processes which were used to update this model.

Multiple pieces of input data were needed to accurately simulate the movement of water within the area of interest for the time period of interest.  These data are detailed in the following sections.

A 1/3rd arc-second digital elevation model (DEM) encompassing the entire Truckee River watershed was downloaded from the USGS National Map Viewer: https://viewer.nationalmap.gov/basic/.  Within the area of interest, 1/3rd arc-second equates to a horizontal resolution of approximately 10 meters.  The NED 10m DEM was used to make modifications to the subbasin delineations within the existing HEC-HMS project.  The NED 10m DEM was clipped using a buffered polygon that surrounded the Truckee River watershed, projected to the Albers Equal Area Conic coordinate system, and the vertical units were converted to feet.  The resultant NED 10m DEM is shown in Figure 7. 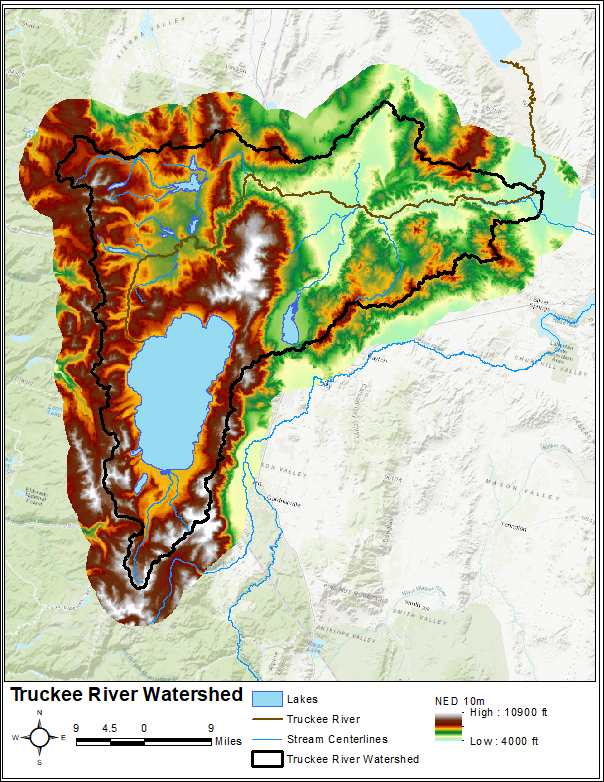 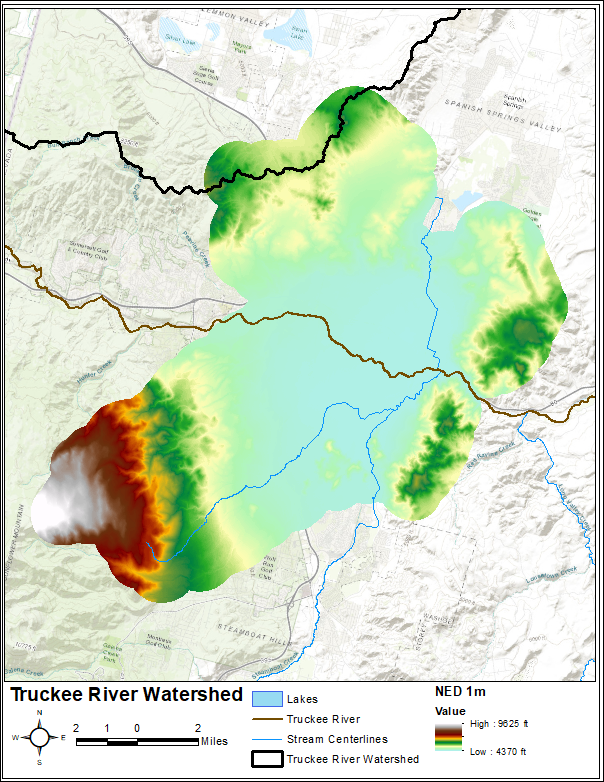 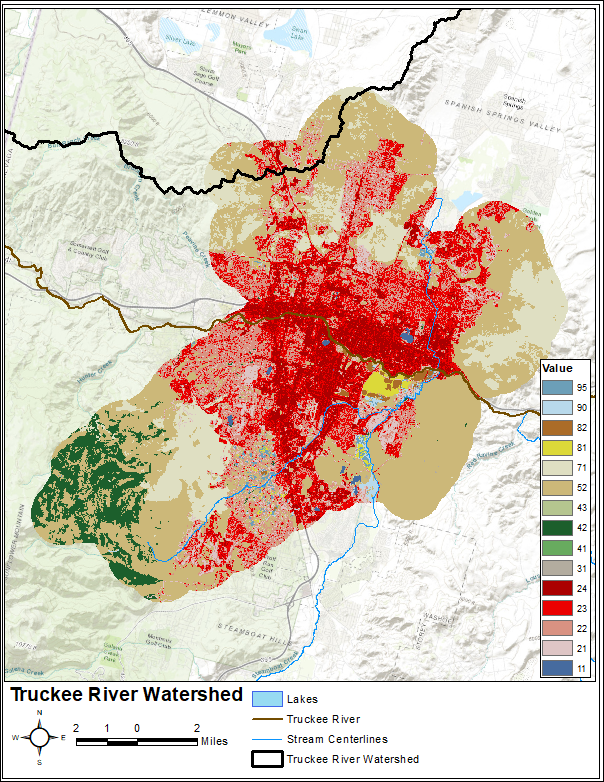 Hourly gaged precipitation for the time period of interest was downloaded from the National Centers for Environmental Information (NCEI): https://www.ncdc.noaa.gov/.  GageInterp was then used to create hourly precipitation grids which captured the temporal and spatial resolution of precipitation throughout the Truckee River watershed: https://www.hec.usace.army.mil/training/CourseMaterials/Mongolia_Workshop/gageInterpUserManual.pdf.

Parameter-elevation Regressions on Independent Slopes Model (PRISM) precipitation for the time period of interest was also downloaded: https://prism.oregonstate.edu/.  In general, this data represents the spatial and temporal distribution of precipitation much better than the gage precipitation (and resultant grids created by gageInterp).  The PRISM data was first projected to the Standard Hydrologic Grid (SHG), clipped to the area of interest, and converted to DSS format using Vortex: https://github.com/HydrologicEngineeringCenter/Vortex.  The PRISM data was used to "correct" the gageInterp output at a daily time step.  In essence, each grid cell within the gageInterp grids was adjusted to to equal the corresponding grid cell within the PRISM data set.

Modifications to the Existing HEC-HMS Project

To utilize the 2D Diffusion Wave transform within HEC-HMS, the subbasin elements of interest must be georeferenced.  New GIS features have been recently added to HEC-HMS to aid in this process.  These features allow the user to create an HEC-HMS model from scratch, georeference existing basin model elements using shapefile information, and/or update subbasin and reach delineations.

A copy of the existing January 1997 flood basin model was created (called "Jan_1997_2D"), the previously mentioned NED 10m terrain data was added to the project, and the NED 10m terrain data was associated with the copied basin model.  Next, the HEC-HMS GIS tools were then used to merge the three subbasin elements that represent the land surface processes throughout the area of interest into one (called "RenoSparks").  Also, the three reach elements representing the Truckee River, Steamboat Creek, and North Truckee Ditch within the area of interest were removed.  The resultant layout is shown in Figure 10.

The "RenoSparks" subbasin was then exported as a shapefile using the GIS | Export Georeferenced Elements tool.  Finally, every subbasin except "RenoSparks" was set to use the Structured discretization method and grid cells were computed by clicking GIS | Compute Grid Cells.

The Gridded Temperature Index snowmelt, Simple canopy, Deficit and Constant loss, 2D Diffusion Wave, and Linear Reservoir baseflow methods were selected for use within this new subbasin.  Initial estimates for each parameter within the aforementioned methods were then made using area weighted averages from the subbasins which were merged together and are shown in the following tables:

Creating a Mesh and Boundary Conditions within HEC-RAS

Currently, users must create a 2D mesh and any associated normal depth, flow, stage, and/or rating curve boundary conditions within HEC-RAS (version 5.0.7 or newer) and then import to HEC-HMS.  In the future, users will be able to create and modify both 2D meshes and boundary conditions entirely within HEC-HMS.

To create a 2D mesh within HEC-RAS, a new project was started and an empty, new Geometry file (called "base") was created.  Next, RAS Mapper was opened and the previously mentioned NED 1m terrain data was imported and associated with the new geometry.  Then, a single 2D Area (called "RenoSparks") was created using the subbasin shapefile, which was previously exported from HEC-HMS.  Breaklines were used to align cell faces with prominent topographic features like roadways and embankments.  Computation points were then created within the HEC-RAS | Geometric Data editor using a 500 ft x 500 ft spacing.  Finally, three Boundary Condition lines were created at the Reno gage location (called "Truckee_inflow"), Short Lane gage location (called "Steamboat_inflow"), Spanish Springs gage location (called "NTruckeeDt_inflow"), and Vista gage location (called "Truckee_outflow").  The 2D mesh, breaklines, and boundary condition lines are shown in Figure 11. 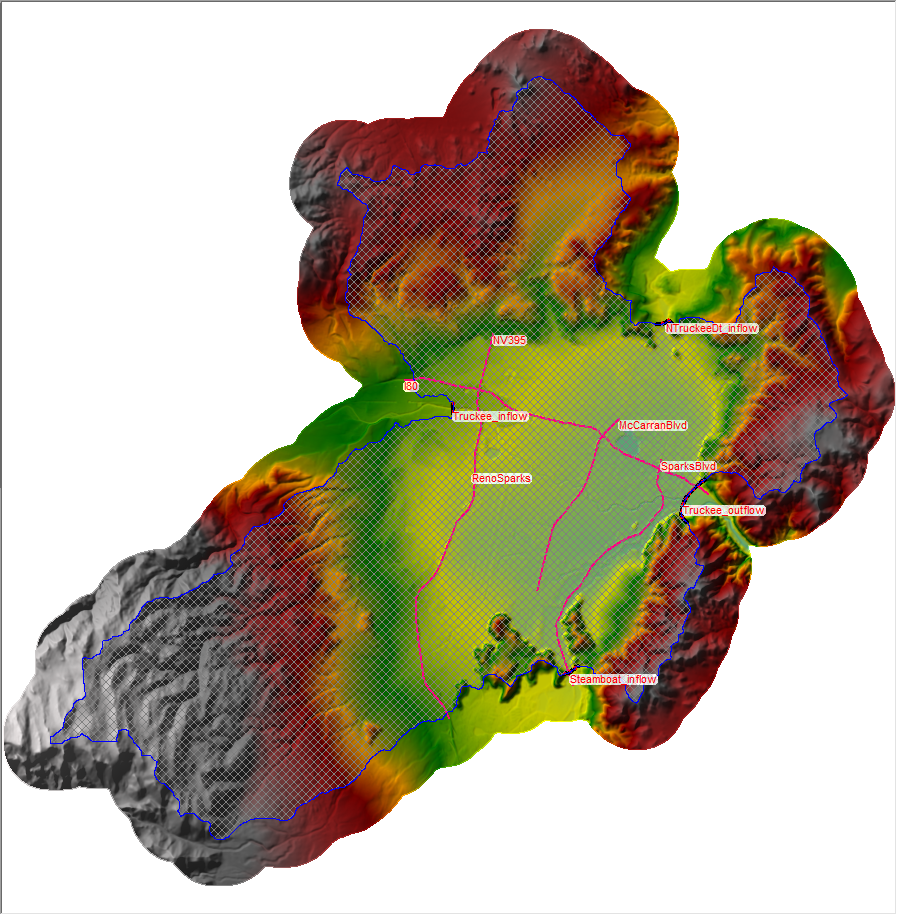 In order to better simulate the movement of water throughout the area of interest, a spatially distributed Manning's n Layer was created within RAS Mapper.  To allow for faster movement of water through defined stream channels, a buffered polygon layer surrounding the previously described NHD streams was created and imported to RAS Mapper.  Then, a new Manning's n layer was created by combining the previously mentioned NLCD 2016 land use classifications and the buffered streams polygon layer; the buffered streams polygon layer was placed at the highest hierarchy (i.e. overrides the NLCD 2016 land use classifications).  Initial estimates for Manning's n were assigned using the following table:

This new Manning's n Layer was then associated with the geometry and is shown in Figure 12. 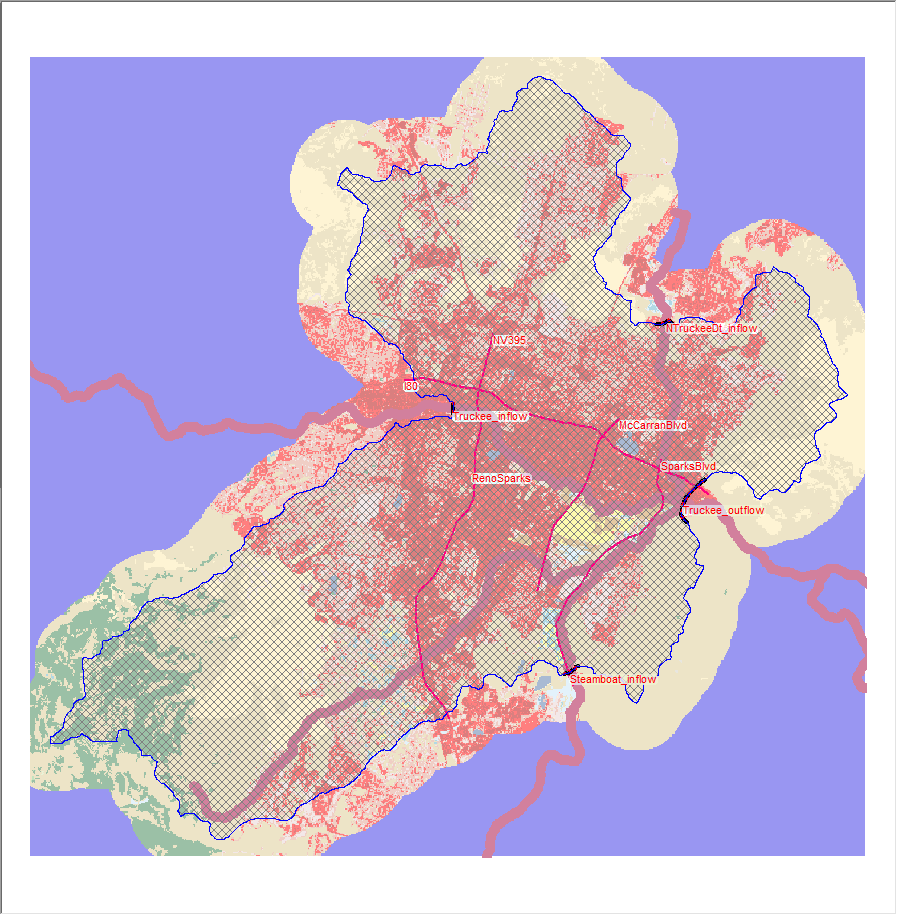 Importing the Mesh and Boundary Conditions to HEC-HMS 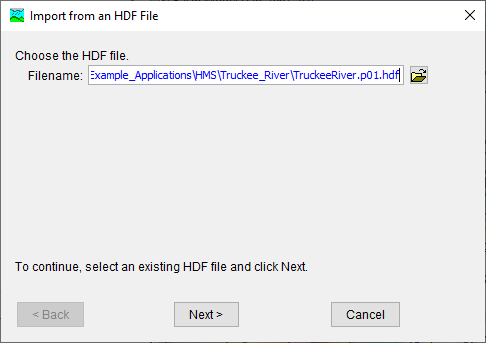 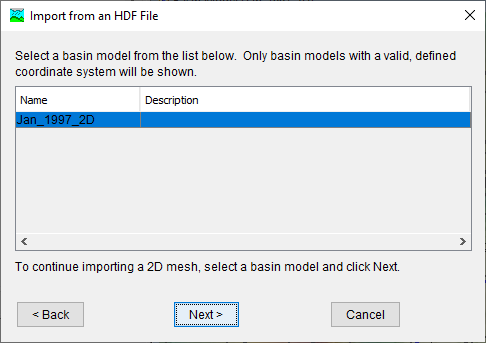 On the third panel, the "RenoSparks" subbasin was selected, as shown in Figure 15. 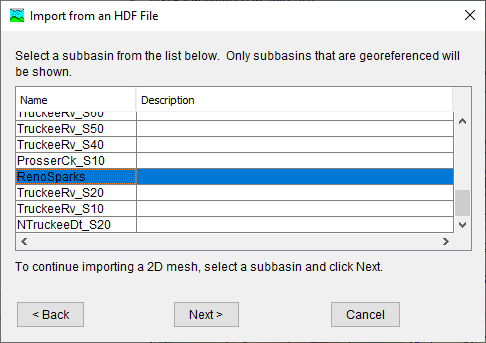 On the fourth panel, the "RenoSparks" 2D Mesh was selected, as shown in Figure 16. 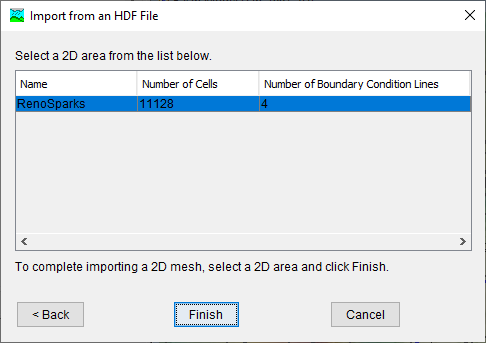 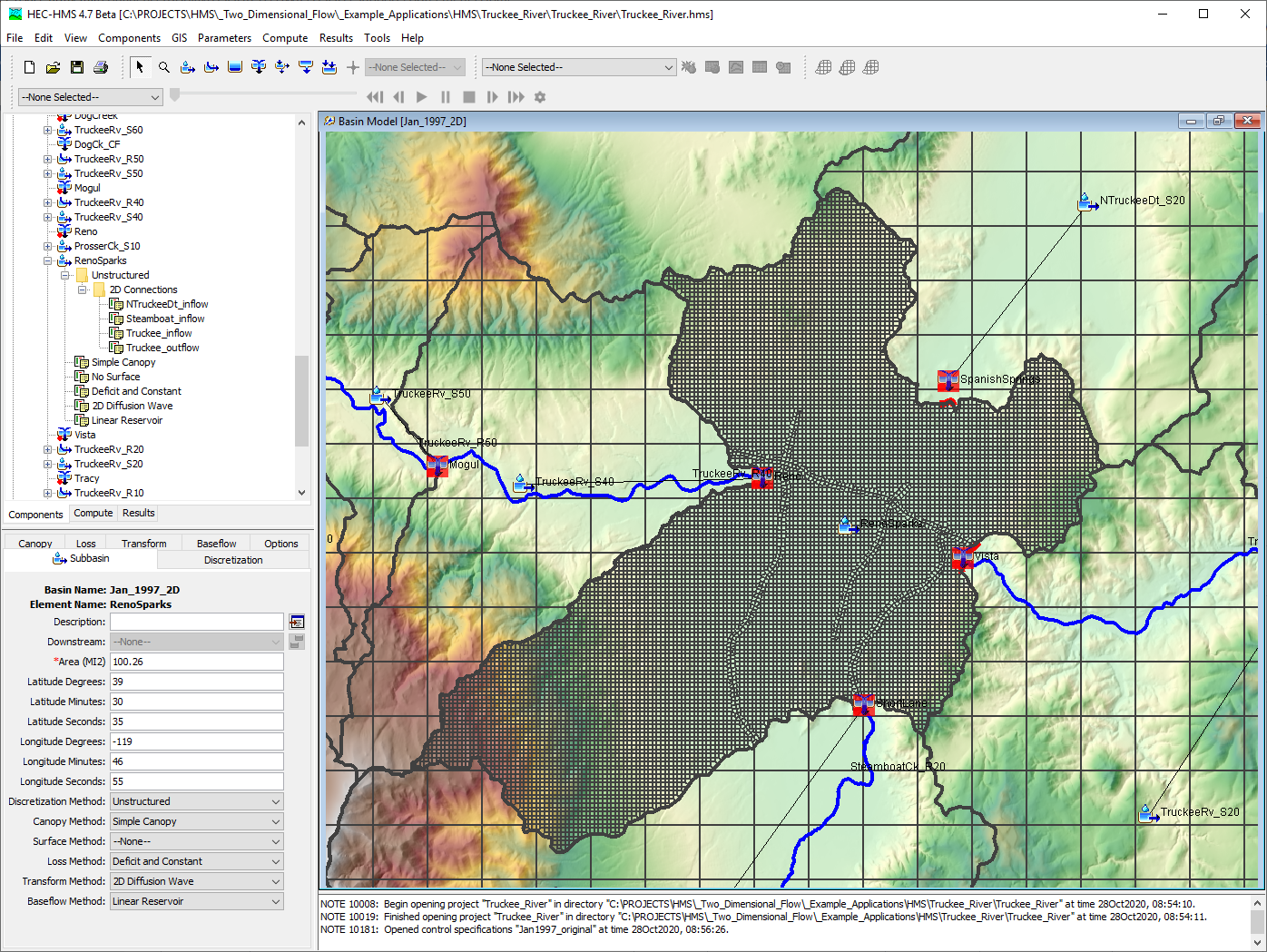 Within HEC-HMS, 2D Connections are used to supply boundary conditions as well as link other elements to/from the 2D mesh.  As such, existing elements within the HEC-HMS project were connected to the newly imported 2D Connections to supply inflow and receive outflow:

Next, the 2D Connections were parameterized: 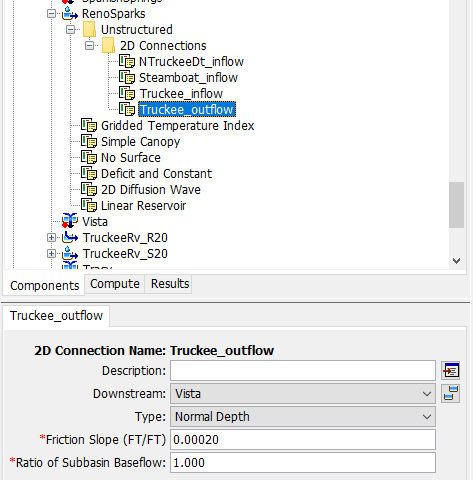 Creating a Simulation Run within HEC-HMS

A simulation run within HEC-HMS requires a Basin Model, Meteorologic Model, and Control Specification.  The existing "Jan_1997" meteorologic model was used.  This meteorologic model was set to use the Gridded Precipitation, Gridded Hamon evapotranspiration, and Gridded Temperature methods.  The existing "Jan1997" Control Specification was selected and a Start Date, Start Time, End Date, End Time, and Time Interval of "27Dec1996", "06:00", "15Jan1997", "06:00", and "1 Hour" was used, respectively.  Finally, a new Simulation Run (called "Jan_1997_2D") was created.  The previously mentioned Basin Model, Meteorologic Model, and Control Specifications were selected and the simulation run was computed.

Once the simulation run was successfully computed, results for the "Vista" junction were plotted and are shown in Figure 20. 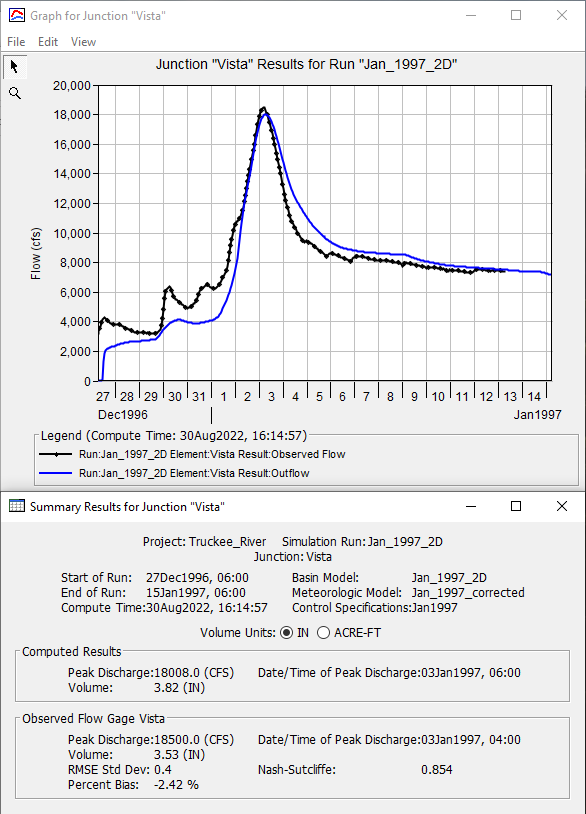 As is evident in this figure, the computed results match the observed streamflow much better than the results which were previously presented in Figure 6.  Also, time series for each 2D Connection were plotted and investigated, as shown in Figure 21. 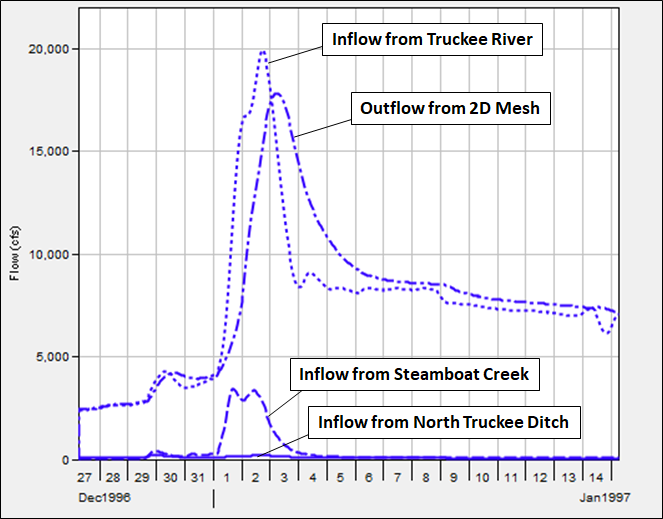 Finally, spatial variables like SWE, cumulative precipitation, hydraulic depth, water surface elevation, and velocity were investigated. A tutorial showing how to turn on and view spatial results can be found here: Viewing Spatial Results for a Structured Discretization. As shown in Figure 22, the spatial results indicate streamflow exceeding the Truckee River channel capacity starting just downstream of the Reno gage and spreading throughout the floodplain.  Also, the backwater effects caused by the natural topographic constriction in the vicinity of the Vista gage results in reduced average cell velocities and excessive hydraulic depths throughout the area of interest, as shown in Figure 23.

The computed hydraulic depths were compared with observations of both depth and inundation extent, as shown in Figure 24, and were found to compare well. 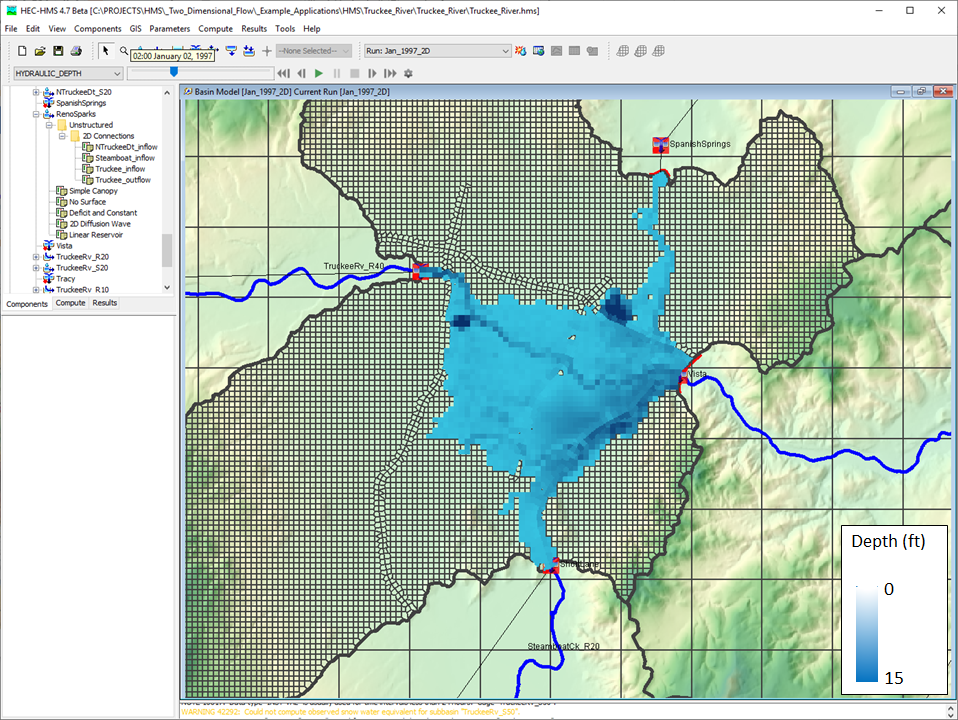 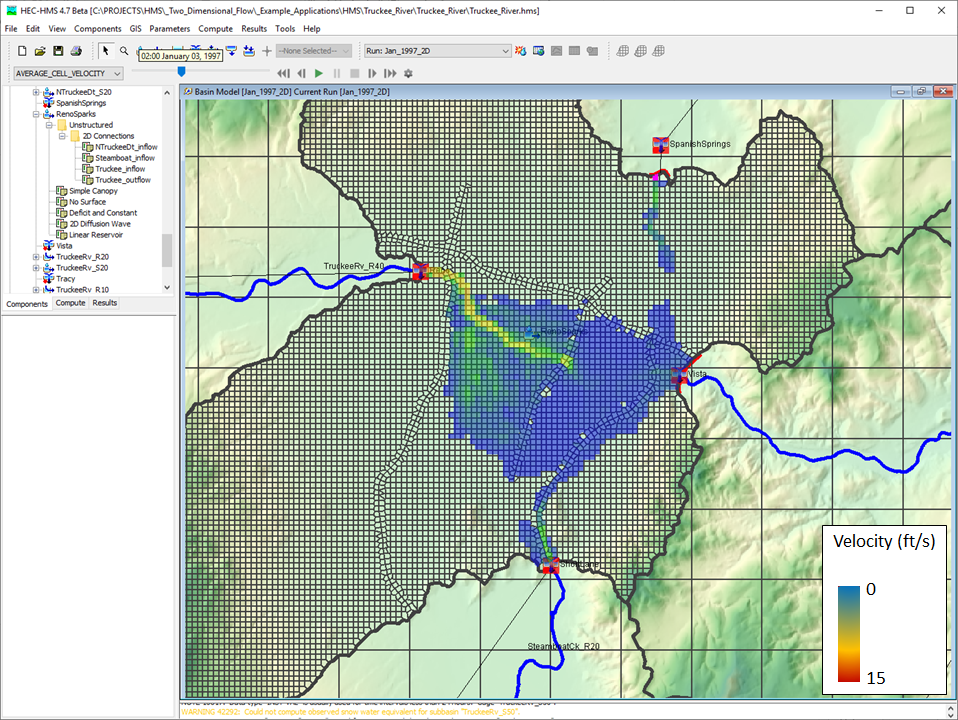 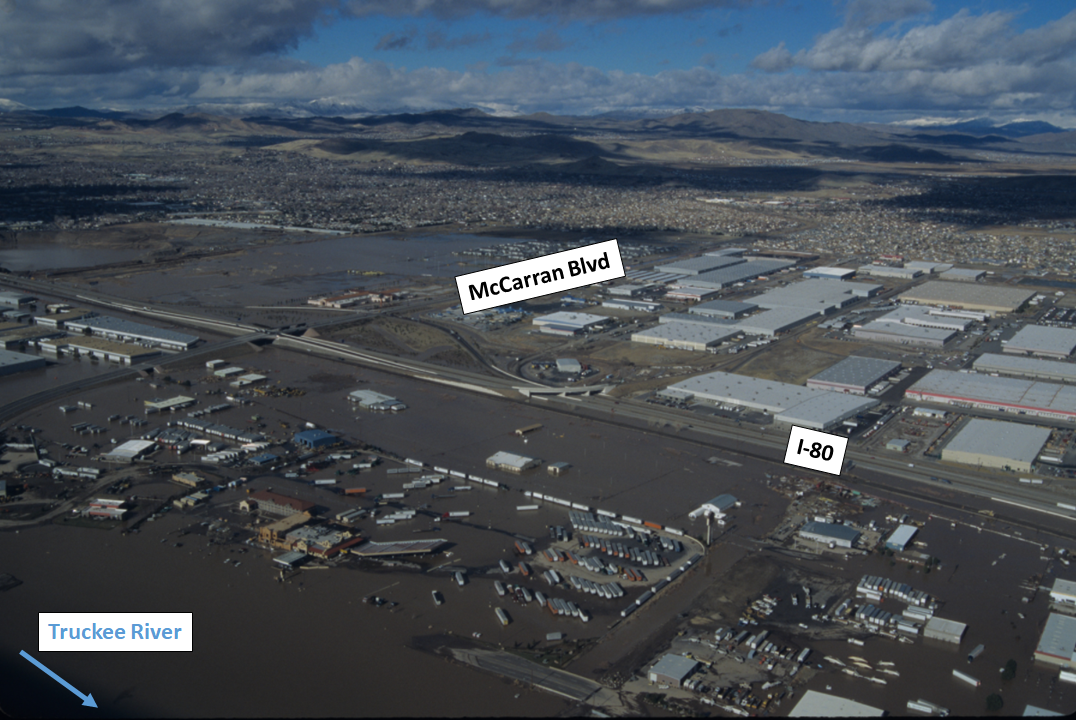 Videos of hydraulic depth, average cell velocity, and water surface elevation within the area of interest are shown below.  Also, videos of cumulative precipitation and SWE throughout the entire Truckee River watershed are shown below.

At this point, the modeler can make changes to the loss, baseflow, and 2D Connection methods/parameterizations to provide a better response throughout the watershed.  However, HEC-HMS does not currently allow the user to modify Manning's n values within a 2D mesh.  This must be accomplished within HEC-RAS by generating a new Unsteady Plan HDF file and importing to HEC-HMS.  In the future, users will be able to create and modify Manning's n Layers entirely within HEC-HMS in addition to many new features related to 2D flow.

The completed HEC-HMS project can be downloaded here: Truckee_River.zip.